‘Mazi’ title in Arochukwu: Who qualifies for it? 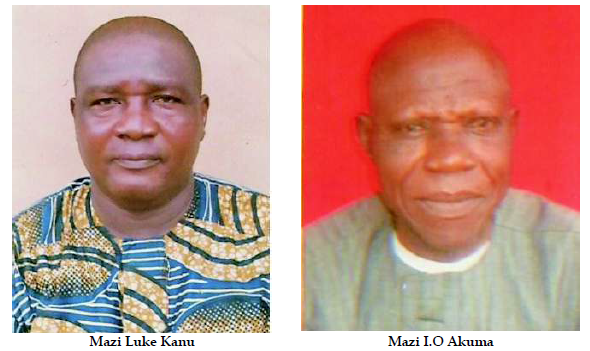 ‘Shut up; don’t address him as “mazi” yet,’ was an exclamatory rejection made by an elderly man to a younger man who had addressed a fellow middle-aged man sometime in the past as “mazi,” during a socio-cultural gathering at Amuvi, Arochukwu.

Then suddenly, a ‘boy’ of about eighteen years told his compeer-friend at Isimkpu village that henceforth he should be addressed as ‘mazi’ because of a reason he gave to the babe.

And just recently, a highly-placed, retired tutor-administrator and a socio-cultural activist in Arochukwu said openly while discussing with those around him one day that ‘A na etoru nna nta etoru n’ali Aro,’ and went ahead to warn that those who answer and abuse the title and have not done the ntoru to steer clear of the title ‘in their own interest.’

Based on the above controversy surrounding the use and abuse of the title and other incidentals, Aro News went in to ascertain from Aros who actually qualifies to bear and answer the title ‘mazi’ in Arochukwu as a bastion of Igbo trado-cultural heritage.

So, Aro News went to town and spoke to some Umu Aro on the issue; and below are excerpts from some of the respondents on the issue.

To be called ‘mazi’ in Arochukwu, a man must have come of age and whose father is no longer living; some school of thought indicate the person must have married and must have been initiated into ekpe society.

A son does not become ‘mazi’ automatically because his father his died! To be called ‘mazi’ in Aro, a son must have been born of Aro father and Aro mother; must have married, have raised child(ren) and training such children in the right ways people see. Such a person must be participating in Aro traditional heritage very well. The person must not have been convicted of a criminal offence. Again, some positions confer ‘mazi’ title on persons who must be home brought-up. Rascally and dubious persons do not qualify for ‘mazi’ title. ‘Mazi’ title is given to only complete men in Arochukwu, who respect all that the town represents. The title is not for miscreants who think they have made money or have acquired wealth; it is a sacred title.

‘Mazi’ title in Arochukwu is given to any son of the town whose father is no longer living; such a man must have buried his father in the traditional and right way. Apart from the first son answering ‘mazi,’ all other sons of a deceased father are entitled to answer ‘mazi’ because their father is no longer living. When a father is living, the sons will be answering nwa-mazi. There is no position that confers ‘mazi’ title automatically to any son in Arochukwu. No matter how rich a male child in Aro is, he does not answer ‘mazi’ automatically in Arochukwu.

A man whose father is dead is qualified to answer ‘mazi’ in Arochukwu. Again, age confers on sons the title ‘mazi’ in Arochukwu – when one is about 60 years and above. Again, positions can confer on individuals the ‘mazi’ title – such positions include Eze (of any type – Eze Ezi, Eze Ekpe, Eze Oboni, Eze Akang. Again, acquisition of money and wealth can confer the title on individuals – such persons must have embarked on those things that affluence can buy – gigantic buildings, costly vehicles, philanthropic gestures, etc.

In those days, ‘mazi’ was a man who was aged enough amongst other people in such locality. Again, ‘mazi’ was bestowed on those whose fathers had died of natural causes and after attaining certain age. In those days ‘mazi’ was given to the first born – who must have dressed well, received the corpse of his late father as he was being buried; and, in the process, take over the position of the late father after the burial rites had been accorded. It is a position earned by the first son of a father only after observing/performing certain rites of his late father.

‘Mazi’ in Arochukwu is conferred on male sons who qualify for the title – through conduct and age; but the most important qualification is personal conduct. If somebody lives up to one hundred years, and his conduct is unsatisfactory and characterised by blemishes and evil deeds, such a person may never earn the title, though old. That is why drunks, wayward persons, chatterboxes and garrulous persons may never qualify for ‘mazi’ title in Arochukwu. Even though the title is used rampant these days to address nearly every male in Arochukwu today, the real Aro persons still understand the true meaning – that not all men qualify for its use. ‘Mazi’ in Aro means a lot.

‘A na etoru nna nta etoru n’ali Aro. “Mazi” is a title that Aro sons get on merit and earned. Such a person must have attained certain age in life to be called ‘mazi.’ Again, for a person to earn the title, such a person must have to do what is expected of him to do when his father dies – such a person must be prepared to carry out certain rites which include going round the area with mgbom gong.  So, not all those whose fathers have died are entitled to be addressed as “mazi” in Arochukwu; it is a title that is earned through the observance of certain rites. The title is also not earned through wealth acquisition or riches. If, for example, an Aro son is elected chairman of Arochukwu LGA and he is underaged, he is not a “mazi” in Arochukwu, despite his position. So, wealth acquisition and one’s position does not necessarily confer the title on the individual. The title is earned and acquired through observance of certain burial traditional rites and attainment of certain age – and not necessarily and automatically thrust on one because of the death of one’s father – it is a position that is earned.

So, when next you address any Aro son as ‘mazi’ be sure he merits it so that you do not continue to abuse the highly valued title of ‘mazi’ in Arochukwu – don’t call all those boys and men whose fathers have died as ‘mazi’ again so that you do not join those who have continued to abuse the title in Arochukwu, as explained by Eze Ibom Isii, an authority on the matter. The explanation of Eze Ibom Isii on the issue should be enough to educate us all on the use of the title.

‘Mazi’ is a title in Arochukwu that is earned through age, observance of certain burial rites of a man by his first son, and those who occupy such positions as Eze Aro of Arochukwu, Eze Ibom Isii, Eze Ezeagwu, Eze Ezi, Eze Ekpe, Eze Akang, Eze Oboni, Eze Otusi and similar traditional positions in Arochukwu ancient kingdom. It should not be trivialised again and abused the way many of us do today in Arochukwu, especially those who had returned to the town in old age and who consequently know next to nothing of Aro traditions and cultural heritage, or those who have not lived in Arochukwu for once as to understand and know the cultural heritage of the Aro; or some of the so-called Christians in our midst who claim to see nothing good in Aro traditions and cultural heritage; or yet those who do not like to inquire about their cultural heritage but who claim they know all yet they wallow in ignorance continuously.

Politician and businessman turned 54 on the 9th of January. A native of Ndiadimoha village, Arondizuogu, Akusinachi attended Iheme Memorial Grammar School, Arondizuogu and the ...