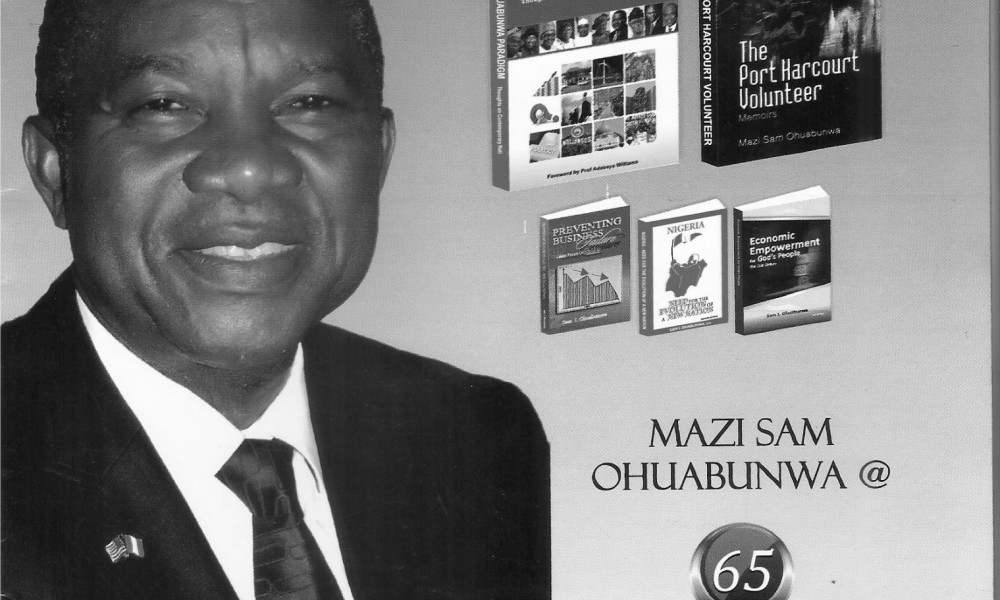 All roads – on August 17, 2015 – led to Sheba Events Centre in Maryland, Lagos, as captains of industries, chief executives of financial institutions, the academia, celebrities, the clergy, in fact, crème-de-la-crème of the Nigerian society and people from all walks of life converged on the above named centre to honour a distinguished Nigerian, Mazi Sam I. Ohuabunwa (OFR) as he turned 65.

The event was the public presentation of two of his latest books and commemoration of his 65th birthday. The books – The Port Harcourt Volunteer and Sam Ohuabunwa’s Paradigm – were unveiled by top notch Nigerians at the event.

On that day, the venue could hardly contain friends, admirers and followers of Mazi Sam’s entrepreneurial voyage.

Food and drinks were in abundance as guests took the rare opportunity of attending a public function on a Monday afternoon to unwind and network.

The Port Harcourt Volunteer, with its foreword written by Mazi Sam’s childhood friend, Mazi Sonny Allison, chronicles his exploits as a young military officer fighting on the Biafran side during the Nigeria civil war. It tells how his educational career as well as other young east of the Niger was almost truncated by the war, his last days at Okrika Grammar School, to his enrollment into the army; his various close shaves with death and other interesting exploits.

Sam Ohuabunwa’s Paradigm is a compilation of the author’s weekly articles in Newswatch Times and Businessday newspapers. The articles he has written over the years on various national and global issues are captured in the 463-page book. The foreword is written by Prof. Adebayo Williams.

The books were reviewed by Prof. Jemie Onwuchekwa, Editor-in-Chief of Businessday and Prof. Ayo Olukotun of the Department of International Relations, Obafemi Awolowo University, Ile-Ife.

Though he clocked 65 on the 16th of August, many used the opportunity of the 17th to thank God for the gift of a rare gem to the nation like Sam Ohuabunwa.

The Minority Whip/Member representing Arochukwu State Constituency in the Abia House of Assembly, Hon. Dr. Mike Ukoha has commiserated with the people of Isu community ...