The significance of Ikeji Aro festival 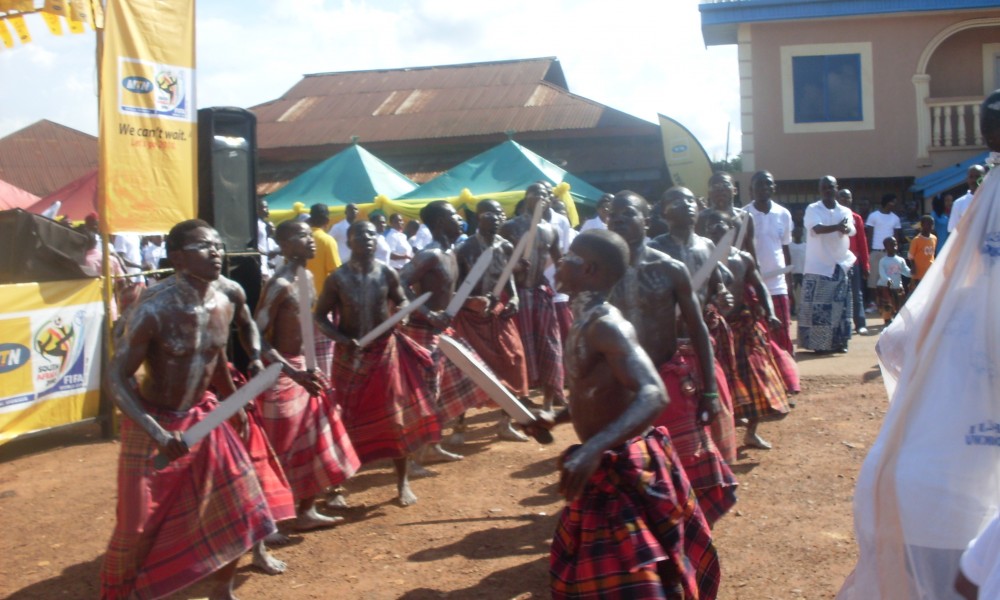 Ikeji Aro is a yam festival celebrated annually to mark the harvest of new yam in Aro. Aro celebrate the festival in the month of September, at times the celebration crows into early months of October. The end of Ikeji does not mark the beginning of another farming season, as it opens a recess that leads into dry season (okochi) , when the soil becomes hard and already harvested yams are stored in the barn, the time is known as onwa ato izu ike Aro.

The significance and traditional activities which accompanies the Ikeji festival that makes Ikeji Aro glamorous and unique in Igbo land are  “Ikeji” categorically means harvesting of yam, which is a significant food crop among the Igbo people…it also marks the end of the year. That is why it is characterized by general grand event by people and sacrifices to Chukwu (God) for good and quality harvest. Pilgrimage is made to the Aro homeland by the Aro in the Diaspora serving as re-union between the two. In the past, this re-union served as an opportunity for reviewing the conditions of Aro in the Diaspora and for re- examining the strength of Aro influence and authority in the various Aro settlements; The Ikeji season afforded the Aro an opportunity for planning strategies for the continued growth and development of the Aro at various settlements. Authorization for the eating of the new yam is given by the Eze Aro. Until the Eze Aro makes the appropriate proclamation, new yam is not eaten by the Aro nation;  Ikeji was an occasion for trooping the colors. A display of masquerades is held. The various Aro settlements send in their dances and masquerades to perform in this most colourful carnival at the Amaikpe arena.

AFOR ARO NA-ZA AWADA
Members of the Otusi (clan) of the Amaja sweep the Awada of Okennachi at Oror village. Only the Amadi (Aristocrates) of Aro witness the occasion. The attendants come tying bells on their waist and carrying gongs, both instruments producing resonant sounds.

AFOR NDULASA NWAEKPE
Nwa Ekpe literally ‘the child of Ekpe’ (different from the secret cult Ékpé) but in fact a symbolic representation of the royal ancestors is led home. All nine Otusis (clans) in Aro go to Ugwuakuma village in different processions to offer sacrifice, people tying bells around their waists while carrying gongs on hand. The ceremony ends at night and people return singing joyfully. On their return from Ugwuakuma, the talking drums (uvie) is brought down from where they had been left hanging since after the last Ikeji celebrations, rolled out and played. The uvie sounds only in the compounds of the most outstanding men of each village. The uvie is not usually brought down in a compound that is not ready with the relevant sacrificial materials. The sounding of the uvie is indicative that the Ikeji celebration has gone into full gear.

NKWO NKU
Nkwo Nku is the day following the Afor on which Nwa Ekpe is led home. It is a day on which women are expected to fetch firewood for their husband’s mother, their mistresses or close friends. The wood is meant for cooking while the Ikeji season lasts. It is indeed a friendly gesture of love and respect for elders.

EKE AGBA UDU
On this day, the Amadi (Aristocrates) of Amuze section of the Aro kingdom offer sacrifice, Ibom Isii do not. The day is marked with unrestricted festivities. The Amadi move around and are feted wherever they enter.

ORIE AWA
Fodder is obtained for the feeding of goats etc, while more firewood is fetched. Compounds and village squares are cleaned up to welcome Aro from the Diaspora.

AFOR AWA
By this day, all Aro coming from abroad are expected to have arrived Aro. Cleaning up activities are rounded up. Everyone is in full holiday mood – men, women and children look spick-and-span. People are not expected to go to work i.e farm. Women spend time in body painting (ide uri and ide – nkasi ani) which are traditional indigo cosmetic designs on the body, which is kept bare for the cosmetic designs to be seen and admired. Today however, times have changed as women now prefer to put on beautiful clothing and some of these old traditional outfits are reserved for mgbede brides.

NKWO NZUKORO
On this day, Aro are expected to do the last shopping for the season. Although Ikeji is a yam festival, the eating of other foods has been introduced in recent times on this day which on this account is also known as Afia Nkwo. Nkwo Nzukoro, the Aro main market, Ncheghe, and the Eke Ukwu market, go on recess.

EKE ODU
On this day, the Ututu people bring yams for the Aro to buy. The Aro eat new yam on this day. All market activities are concentrated at Amaikpe in Obinkita village for, as we observed earlier, after Nkwo Nzukoro, the Ncheghe and Eke Ukwu markets go on recess.

ORIE EGBUGBU
Early in the morning of this day, a succulent plant known as OKPOTO is placed at the entrance of each onu nkpu (compound). The most elderly Amadi of the compound offers a sacrifice before the arrival of dawn. Thereafter, at about 7.00 a.m., every family offer sacrifice to its ancestors at the family ulo nta, literally small house but an ancestral assembly hall where the family staff of office is reposed. Chicken and cows are sacrificed. Compounds that can afford it hire the Ututu to play Okon and Igeri music. People are expected to tether their domestic animals to prevent them (especially goats and dogs) from tasting the ofor left at the ulo nta. Any animal found tasting the ofor would be killed instantly. In the evening, families begin to cook an Ikeji delicacy called osu. This delicacy is only prepared by women of proven purity and decency in manners and behaviour although their aboriginal status carries more weight. The end of the cooking is heralded with gun shots, each gunshot representing each goat used for the meal.

AFOR OSU
The osu meal prepared the previous day is now presented to friends and well-wishers on the Afor osu morning by women. Visitors are also entertained with the delicacy. Members of each family are summoned to the osu meal by the exclamation AFOR OSU OKO-O! The word Okoo is an exclamation used by the Aro to signal an emergency.

NKWO IBOM-ISII
On this day, Ikeji activities are centered in and around the Ibom village as the day’s activities purely concern Ibom Isii; Plays and wrestling matches are staged with people demonstrating their skills in dancing and arts. Other Aro attend as Ibom Isii guests. Girls show their beauty in true or high quality maidenhood, while women dress and dance to suit the taste and style of their village dances as they move and pass in waves of merriment before the Eze Aro and his cabinet sitting in majestic appraisal in Ibom square.

EKE EKPE AROCHUKWU
This is the climax of the Ikeji festival when the Aro at home and in the Diaspora put on their best attire, assemble in the ceremonial arena at Amaikpe in their separate groups, with dances and masquerades, to make merry and celebrate with fanfare, pomp and pageantry.