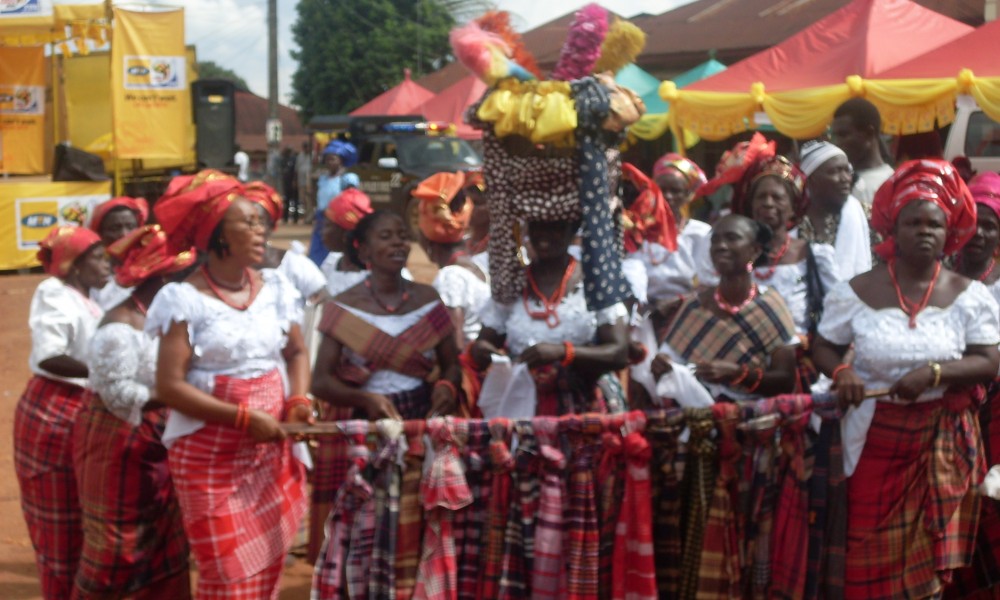 Having played second fiddle to Amannagwu village in the past two editions of Eke Ekpe, Amuvi village bounced back to reclaim the first position in the 2015 edition of Eke Ekpe.

This year’s event was significant as it marked the last Eke Ekpe to be organized by the Nnamdi Udoh-led Nzuko Aro exco, which bows out of office in Easter 2016.

Before the commencement of competition by the 19 villages, the President General of Nzuko Aro announced a change of name for the venue at Amaikpe, Obinkita from ‘Shagari Hall’ to ‘Eze Kanu Oji Hall’.

As the event commenced, most villages showcased different colourful dance and masquerade groups. For example, Asaga village presented the Odum Mgbede dance with 95-year-old Madam Grace Avuekwe Ivi, mother of Aro News Chairman, Mazi Emma Kanu Ivi as the star attraction. The dexterity exhibited by Mama Ogene Ukwu who danced from Asaga to Amaikpe and then back to Asaga no doubt won a huge admiration for her village. She displayed rare dance steps which brought back memories of old to many ‘senior guests’. The podium finish by Asaga was attributed to the efforts of Madam Avuekwe Ivi.

Not to be outdone by other villages, Obinkita stormed the venue with a dance reminiscent of the slave trade era. The interpretation and organization of the dance by the cast made many dignitaries stand on their feet throughout the performance, and, of course a resounding applause greeted the display. However, the splendid performance failed to impress the judges, and Obinkita finished outside the podium.

Amannagwu entertained with their characteristic Amarigwe dance. Its performance was, as usual, scintillating. Amasu showcased the Ugbo Ali dance, which was also a delight. Amankwu came with their usual Nmawu. Ditto other villages which showcased one dance group or the other.

In all, the most exciting performance of the day was by Isimkpu. The village unleashed Ndi Abaa with their Ekete Nsi on the spectators. The village was the last to perform. Immediately they entered the arena, the heavens literally opened and poured out its contents in the form of rainfall.

Of course, the wetness spurred the group to the peak of their performance as they naturally thrive on marshy soil. Ignoring the rain, they danced and danced for more than thirty minutes with most guests dancing to the rhythm of the music eliciting nostalgic feelings. Immediately the performance ended, the rain stopped and the sun shone brightly as if it had not rained in days.

At the end of an exciting evening, Mazi Nnamdi Udoh announced the results as follow: Amuvi – winner; Ammanagwu, first runner-up, while Asaga came third. Predictably, was disappointing to those who felt that Obinkita ought to have finished in the podium while Amannagwu should have retained its first position.

Chief (Engr.) Okechukwu Ikoro, politician and businessman clocked 58 on the 17th of Feburary. A native of Ndiawa village, Arondizuogu, Mkpadirigbo was educated at Eziama ...