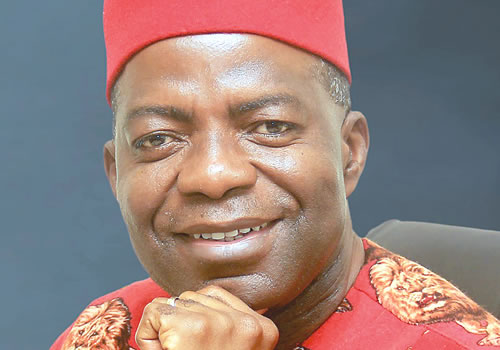 Dr Alex Otti, the governorship candidate of the All Progressives Grand Alliance, APGA, in the 12 April, 2015 gubernatorial election in Abia State, has been broadcasting to APGA supporters in Abia State since then, and all those who had ‘voted for me’ to ‘remain calm, peaceful and patient’ as the governorship candidate of the People’s Democratic Party, PDP, in that election, Dr Okezie Ikpeazu was, on Tuesday, 3 November, 2015 declared the winner and duly elected in a judgement in Umuahia that day, contrary to the ‘expectations’ of the people of the state.

In his repeated broadcasts to the people of Abia State on Pacesetter, Vision Africa Radio and Family Love FM (all in Umuahia) since after the judgement, Dr Otti said that he had noticed that the people of Abia State had been unhappy and surprised (as he himself had been) at the judgement which, he claimed, was ‘compromised’ as it was ‘manipulated by those who handled the case.’

Dr Otti told his audience that since there was another avenue to get justice, he had already appealed the judgement, and had hoped he would get justice at last since it was, according to him, the people’s wish that he became their governor as they had voted for him overwhelmingly. He, therefore, assured the people that in the end, they would get justice, as ‘the Abia project is not about Alex Otti but the future of Abia state and generations unborn.’

And on Sunday, 15 November 2015, Channels TV had carried a news story in which a group of APGA supporters in Isiala Ngwa North and South LGAs of Abia State had staged a peaceful demonstration during which time they warned that ‘enough is enough’ in the state; they had called on the tribunal at the appellate level to ‘give Abia people justice in the end as we had voted for change in Abia State on 12 April, 2015.’

Speaking to Aro News on interview, one of the supporters of APGA in Umuahia, George, had told the reporter that ‘all the judgements delivered so far are temporary victories for the PDP. We will soon get final justice at the appeal court. So, don’t be deceived at all. We will surely reclaim our mandates.’

At Isimkpu, Arochukwu, another APGA member had declined to talk to the reporter in annoyance, ditto at Oror because, according to another respondent and a confidant-friend of the reporter ‘as a well-known member of PDP in Aro Ward 11 and Okezie Ikpeazu grand supporter, I know you and other PDP members are now mocking us. What do you want me to tell you on the things you have done to APGA in Umuahia. God knows the best.’

Meanwhile, members of the Follow Better Organization, FBO, in Arochukwu had been reveling in joyous moods and thanking the National Assembly Election Tribunal in Umuahia for delivering judgement in favour of their founder-leader, Senator Mao, who had been declared the winner of the senatorial election conducted in Abia North zone of Abia State on 18 March 2015 when the Abiriba-born Chief David Ogbaa Onuoha (of Bordex fame) of APGA, and Igbere-born Chief Orji Uzor Kalu (of the PPA) had contested with Hon Mao and who had all gone to the tribunal to challenge Hon Mao’s success at the pools.

Also the members of the PDP in the zone, particularly those from Arochukwu and environs, have been thanking God that Arochukwu has finally produced a senator for the zone in the person of Hon Mao, they enthused, will surely help them to get their hitherto deplorable Arochukwu-Ohafia federal road tarred before long, and possibly reactivate the taps the Mbakwe administration of the Second Republic politics had laid in Arochukwu between 1979 and 1983 so that the people will have access to portable water they need to have and drink to discourage water-borne diseases in the area, among other expected dividends of democracy from him.

A Vote for Aro Carnival and its Sociological Essence

Sociology, often seen as the queen of the social sciences, argues that man (generic man, I mean) is man only in the context of society. Sociology ...