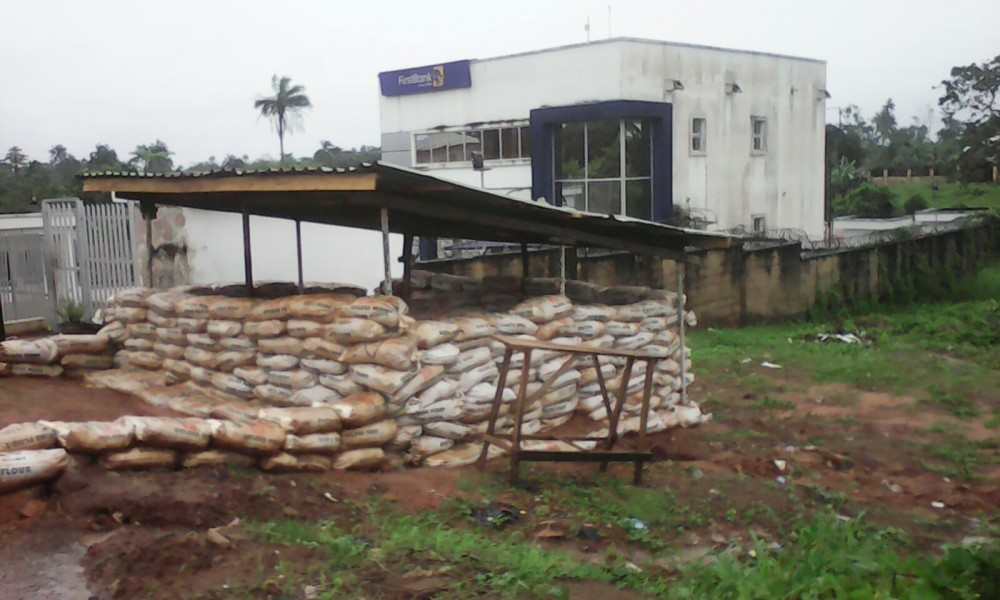 Once again, Mazi Kingsley Dagogo Okoronkwo (Ugwu Aro) has demonstrated love for his community Arochukwu by coming to its rescue. Dagogo’s intervention this time was the construction of a security post at Oror to enable First Bank Ltd reopen its branch for business.

Recall that in the early hours of January 1, 2015, dare-devil robbers attacked the bank leaving in their trail destruction both to the building and its Automated Teller Machines (ATM). Since then, the bank’s doors have remained closed to members of the public. Before then, concerted efforts by well placed Umu Aro to get the bank reopen were unsuccessful.

However, there was a flicker of light at the end of the tunnel when some officials of the bank ‘whispered’ to some Umu Aro the community should demonstrate seriousness to have the bank back to business by providing it with a security post.

Appropriate bodies including Nzuko Aro were informed about the development.

While the bank was under lock and key, Umu Aro used to travel to Ohafia, sometimes as far as Umuahia and Aba as the Union Bank branch in Aro could not cope with the pressure. Of course, queuing in front of Union Bank’s ATM from sunrise to sunset had become a common sight.

Story has it that on one of his trips to Ohafia for banking transactions, Dagogo ran into an Aro woman who was also in Ohafia for the same purpose. As she left the bank premises, her bag containing the money she had withdrawn was snatched from her by criminals on a motorcycle.

On his return to Aro and on a visit to Eze Ibom Isii’s palace, Atu Aba ran into the same woman who was robbed at Ohafia; her story was heart rendering, the money she went to withdraw belonged to members of her association.

Worried by the development, Dagogo approached the authorities of the bank and they restated their demand. He immediately swung into action using his personal funds to build the security post with sand bags. He solicited the support of the Platoon Commander of the Nigeria Prison, Arochukwu , who supervised and directed on the laying of the sand bags for military use.

Recall that in 1982, Dagogo in the same manner initiated the structures upon which the Arochukwu Local Government Secretariat was founded.

Mazi Dagogo is over 73 years old and still making sacrifices for his community. Where then are the younger generations of Umu Aro?

After all the efforts made by Dagogo, information filtered in that the bank authorities demanded that before they would reopen for business, a delegation led by the Aro traditional council or Nzuko Aro should pay them a visit and officially inform them of the community’s readiness to protect their lives and properties.

As information filtered in and out, Aro News after some investigation reached its contacts in Abuja. One of its editorial board members, who work in a financial institution, was briefed and he immediately tabled the matter before the appropriate quarters. It was learnt that the top echelon of First bank were contacted and a firm promise was made to look into the matter and reopen the branch before the end of the year.

“In Away” steps in

While this was going on, it also emerged that the bank demanded that a separate convenience (toilet facility) be built for the security forces. Nzuko Aro was also approached. Mazi Okoroafor Okereke a native of Ibom village and proprietor of In Away Micro Finance Credit Society, along Ibom/Avia Ovuru road, took the bull by its horns and constructed a soak away for the facility.

The situation was then brought to the attention of the immediate past President General of Nzuko Aro and chairman of Aro News Publications Ltd, Mazi Kanu Ivi who asked for the estimate and made money available for the same purpose.

Mention must also be made of the efforts of some patriotic umu Aro like Mazi Ogbonnia Okereke, a former staff of the bank, who when he was informed about the development by the Managing Editor of Aro News, immediately called the manager in charge of the region and appealed for the bank to be reopen its branch to alleviate the sufferings of umu Aro this yuletide. The reply he received was in the affirmative that a positive response is will be received.

Dr Alex Otti, an accomplished banker and the standard bearer of All Progressives Grand Alliance (APGA), is a frontrunner jn the Abia governorship race. Recently, ...