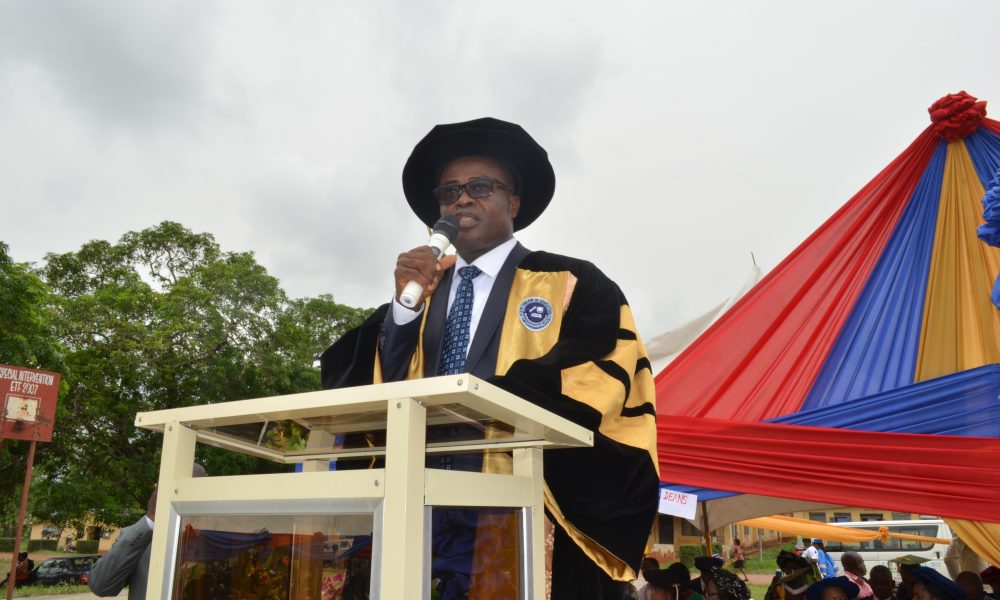 By all and any standards of measurement and tests, the newly appointed provost of Abia State College of Education (Technical), Arochukwu, Dr Philips Nto, the Ututu-born, immediate-past Abia state commissioner for finance, and Michael Okpara University of Agriculture chartered accountant-lecturer, has proved to be ‘the best provost ASCETA has ever had’ within the first two months in office, according to some students, lecturers, workers, group of Aro men and women who had spoken to Aro News on the matter on interview in Arochukwu.

And during his programme at Pacesetter FM radio, Umuahia, on Friday, 27 May 2016, Mr Okey Eugene Imuoh, the anchor man of the popular AM Safari programme of the radio station he usually anchors on Friday mornings, the Ugwuakuma-born and newly elected national publicity secretary of Nzuko Arochukwu, had talked about the marvels and unprecedented achievements of Dr Philips Nto as the then two-month old provost of Abia State College of Education (Technical), Arochukwu that morning, and had extolled him for his exploits and ‘achievements in the college within a very short period in office.’

According to him, ‘Dr Nto had turned round the misfortunes of the ailing and dilapidated, near comatose college within two months in office! The certificates of the students that had not been given to them since 1998 have finally been procured and are ready for distribution to the affected students, just as the abandoned Thalia Foundation building (attracted by the late Ndi Agor, Obinkita-born, patriotic Aro man, Engr Mathias Okoro) had been re-opened….’

Mr Eugene Imuoh had indicated and said he had traveled to ASCETA the previous Wednesday (after a long period) to see things for himself, and that there was steady light in the college that was also wearing a new look in cleanliness; and that vocational and skill-acquisition courses, various committees had been introduced in the college that would enable graduating students to be self-employed instead of job seekers! He had indicated that many of the lecturers and students, workers of the college, including the COEASU chairman in the college, Dr Joseph Kanu, he had spoken to all praised the vision and mission of Dr Philips Nto in turning round the affairs of the near-forgotten and debased, derided and despised ASCETA within two months in office; and enjoined him not to change. That was in spite of the fear that he (Imuoh) had received many text messages and phone calls initially condemning the appointment of Dr Nto, (a non-educationist, accountant-lecturer as the provost) in the first instance by Abia state government.

Aro News had noted that, within two weeks of his appointment, Dr Nto had paid a working visit to the management of the Broadcasting Corporation of Abia State, BCA, with the management team of the college (including Dr Solomon Iheonunekwu who had earlier been announced as provost shortly before Dr Nto assumed office) and readiness to collaborate with the broadcasting house towards turning things round in the college, and go ahead to make it the best college of education in Nigeria, according to a BCA news bulletin monitored in Umuahia after the visit.

Aro News further noted that within days after the visit, the radio station had started broadcasting news (almost on daily basis) about Abia State College of Education (Technical), Arochukwu, including broadcasting one of the best worded, prime-time, sponsored advertisements on the re-branding and repositioning of the college towards making its graduands self-employed and entrepreneurs on leaving ASCETA, instead of roaming the streets, parading their certificates and seeking for the non-existent white-collar jobs!

The airing time of the sweet-sounding advert is very remarkable as it usually kick-starts the beginning of each morning’s news bulletin usually given by 06:30 am each day, or immediately after the news. The advert had been running up till the time of going to Press.

Apart from sponsoring a most wonderful advert on ASCETA turn-round mission on BCA radio, Dr Nto and his team had appeared on another programme of the radio during which time he had taken time to explain in detail, what he intended to achieve in office as the provost of the hitherto ailing college where next-to-nothing was happening (before he came). He had spoken of the need to introduce more technical and practice-based, skill-acquisition courses and programmes (wheel-balancing, painting, brick-laying, vulcanising, etc) that would enable every graduating student to aim at being self-employed on leaving the college; and increase enrolment in the college that was dropping drastically in the college that had about five hundred students before Dr Nto’s appointment in March this year.

Also, a scholarship scheme had been introduced to encourage brilliant students to do more; and that such scholarships would also be given to any student who attracted about ten other students to enrol in the college, among other innovative, tangible and intangible things and incentives introduced by Dr Philips Nto since assumption of office.

And on Friday, 8 July 2016, Aro News had visited the college to see things first-hand. On arrival, the entire college environment was different from what it used to be – neat – and the workers were more mirthful and friendly and receptive when approached; as some of them volunteered information, were willing, and had agreed to talk to the reporter on the ‘wonders of Dr Nto!’ Aro News repeated the visit in August, 2016.

Apart from the willingness of the workers to talk to Aro News, four of the five students Aro News had spoken to did not waste time to praise ‘our new provost for letting us know we are in a higher institution in Arochukwu now,’ according to Irene, one of those interviewed.

Really, it is a thing of joy that a Daniel has finally come to judgment – Dr Philips Nto, the Ututu-born astute administrator, has come to rescue the ailing Abia State College of Education (Technical), Arochukwu many of his predecessors had failed to do.

Bank Anthony appointed to NCDM board

The Federal Government has approved the appointment of Mazi Bank- Anthony Okoroafor into the board of Nigeria Content Development and Monitoring Board(NCDM). Inaugurating the NCDM ...