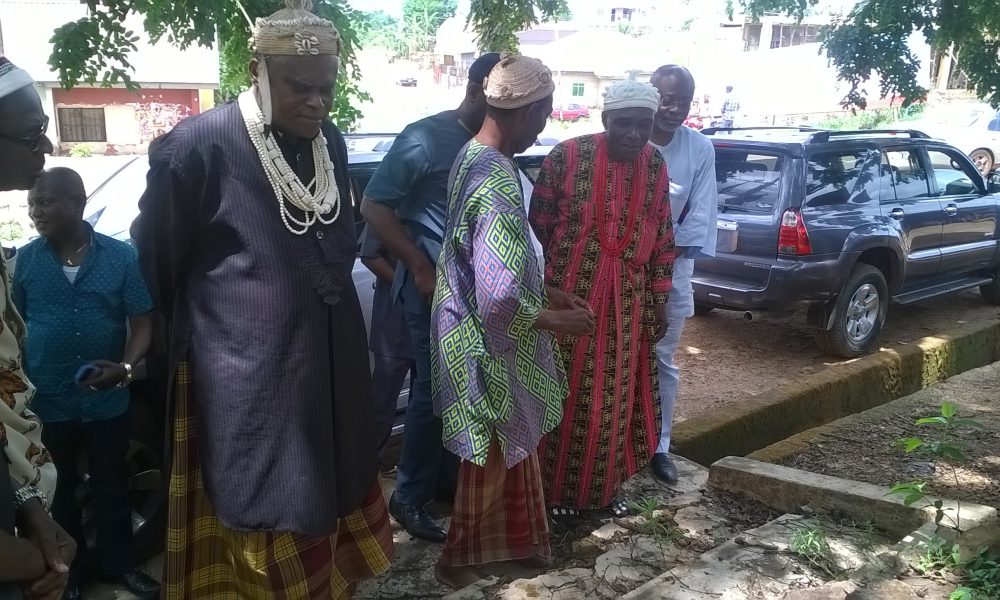 Nzuko Arochukwu leadership under the presidency of Mazi George Okoronkwo Ezuma started receiving goodwill and tremendous support from Umu Aro from different walks of life immediately after its election.

After the keenly contested election and swearing in ceremony at the civic centre, the team immediately proceeded to pay the traditional homage to the palace and were received by the trio of Mazi Oji Kanu, Mazi Okereke Kanu Okereke (Eze Ibom Isii) and Mazi Okorafor Uro (Eze Ezeagwu). It performed its first official duty by unveiling a set of settees donated to the palace by Mazi Ike Okoronkwo and thereafter the traditional ‘’Ikpa nzu’’ was administered on members of the team by Mazi Oji Kanu.

From Oror, the train moved to Asaga where the PG commissioned the first communication centre in Arochukwu andthen to Atani where the team paid homage to Ezeogo Atani, Mazi Charles Kanu. After receiving royal blessings from the Eze Ogo, the newly elected Nzuko Aro exco’s boat berthed at the expansive residence of Sir Chikwe Udensi (Akudo) who after the exchange of pleasantries, took the team and its supporters to his private chapel were prayers and thanksgiving where offered to the Almighty for a successful election. Back to his living room, Sir Udensi in his characteristics philanthropy, announced the donation of a bus to Nzuko Aro and the sum of N5million.

After a lavish entertainment at the Udensi’s, the train moved to Amuvi and was hosted by Mazi Jude Nwosu (Crunchies) who thereafter, pledged a donation of N1million to enable the exco hit the ground running in the administration of the community. The train then retired for the day but this was after it led the new PG home and another round of eating anx drinking ensured.

On Sunday the 27th of March, the team went for a thanksgiving service at the Cathedral of All Saints Church, Ugwuavor, where the Lord Bishop, Rt. Rev Johnson Onuoha and other anointed men of God prayed for a successful tenure for the exco. After the service, the train continued its visit to Umu Aro. Its first stop over was at the residence of USA-based Mazi Emma Nwadeyi who made a donation of N500,000, then to the residence of Sir Ike Okoronkwo and Dr. Orji Ogbonnaya Orji who both donated in like manner. From the Ugwuavor axis, the train moved to Baraki area where it visited the senator representing Abia North, Sen. Mao Ohuabunwa who made an undisclosed donation and promised to work closely with the exco to bring development to the ancient kingdom.

Addressing members of the team, Mazi George Ezuma urged all to be ready to render selfless service to their fatherland. He pointed out that the visit to Umu Aro was the first in the series and stated that more visits will follow. He thanked all who supported the team thus far, and promised to give his best towards the upliftment of Arochukwu.