Eke Ekpe Aro 2016: How Asaga dusted them all 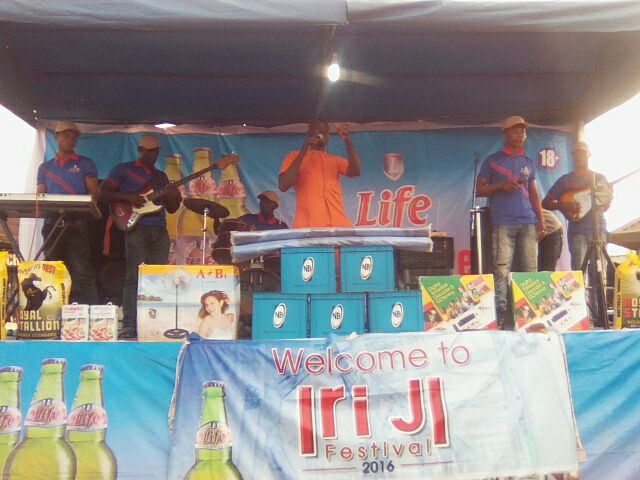 The other side of the mask, a unique traditional dance presented in dramatic form, was the eye catching performance from Asaga village at Eke Ekpe 2016 as it won the Nzuko Aro President General prize for overall best performance. And for its efforts, Asaga village smiled home with N100, 000, up from N20, 000 cash prize given previously by the immediate past exco for such podium finish. It came directly from the purse of Mazi George Ezuma, who has pledged to redeem the first prize at Eke Ekpe during his tenure in office as President General of Nzuko Aro.

The origin, style, content and dimension of The other side of the mask, remained one of the biggest surprises at Eke Ekpe 2016. An interpretation of the Aro-Ibibio war, the story was well interpreted, thus eliciting a resounding applause from the spectators. Being the first out of the 19 villages to perform, the near perfect presentation of the drama raised the competition stake well above the level other villages could figure out, hence the performance remained atop from start to finish. The judges, consisting of the Managing Editor of Aro News, Ugo Okoro, Pastor Clinton Okoro, Mazi Uche Okoroafor and Mazi Henry Nwokike, were unanimous in their grading that indeed the performances merited the position. Interestingly, the dance drama was directed by Emmanuel Theatre Academy as its own contribution to Asaga Movement for Arts and Culture.

Hot on its heels was Oror village which stormed the arena with what they called Mkpa akwukwo eje gi ije ona agba oso. It was making a public appearance for the first time in several years. Ugwuakuma village stormed Eke Ekpe with the worst performance in its history. The non-coordination of the dance pushed the village, predictably, to the rear on the performance chart.

Ujari village presented the popular Ujari war dance; Amoba village held the audience spell bound as it staged the spectacular Uri Ochanja, an interpretation of the return of Mazi Kanu Oji to Aro as a twelve-year-old monarch, accompanied by the British to resume his reign over the kingdom. The performance was beautifully staged. No wonder it won the village the first runner up position and N50, 000, up from N15, 000, which used to be the cash prize for the position.

Agbagwu village entertained with Samba dance while a splinter group from the village showcased Kokoma. The confusion was as a result of the leadership crisis rocking Agbagwu.

Amukwa presented Ekerenkwa, while Ugbo village presented Agwo turu mbe, which was last seen during the burial of Mazi Kanu Oji in 1987.

Ojojo dance from Ndi Akwaeke compound represented Obinkita village at Eke Ekpe 2016, just as Amankwu came with its characteristic Nmanwu. Egwu youth was a presentation of Utuhugwu village, while Atani Nmawuru entertained with Ugbo Ali, a traditional dance that relives Atani’s long standing association with the Ikwere people of Rivers State. Ibom village, on its part, presented Obam war dance. Amasu narrowly missed the podium as it came 4th with its presentation of Ajamaja, a dance performed by both men and women in a boat with their paddles depicting their cultural heritage as river-side dwellers, and a people whose vocation centres round fishing, farming and trading. It also showcased a drama reminiscent of the activities of the Scottish missionary, Mary Slessor. Indeed many observers were disappointed by the outside podium finish by Amasu. Amarigwe war dance ensured that Amannagwu did not leave Eke Ekpe without laurel. The dexterity of the dancers earned Amannagwu the second runner up position, narrowly defeating Amasu to the last podium position. For its efforts, the village received N25, 000 cash prize, up from N10, 000 of last year.

Atu eje ogu masquerade was Ugwuavor’s contribution, just as Amuvi village showcased Ajimegbo masquerade. All cameramen and photographers were ordered to stop filming or taking shots until the dreaded Ajimegbo exited the arena.

Amangwu’s contribution was the Ojojo dance while Isimkpu village, took over the arena with the Abaa (alias Eketensi) dance. It exceeded the time allocated to it as many old and young joined in the display. Unlike the 2015 Eke Ekpe, the heavens did not pour out its contents during the display.

Aro Diaspora communities of Arondizuogu and Ndi Enni Asaa parading a masquerade from Ajalli, entertained guests with Nmanwu, while the star performance was by Ekpe Arochukwu. It was a historic outing last seen during the burial rites in honour of the late Eze Aro, Mazi Kanu Oji.

This year’s event witnessed a remarkable improvement on security and other areas as the major road through Obinkita village was cordoned off while alternative routes were created for vehicles. Spectators enjoyed the proceedings without harassment by motorist and motorcyclists.

Abia State governor, Dr. Okezie Ikpeazu, was represented by the Secretary to the State Government, Dr. Eme Okoro. Others who graced the occasion included Senator MAO Ohuabunwa, Hon. Luke Ukara, representative of Arochukwu Constituency in the Abia State House of Assembly, Barr. Gabe Igboko, Commissioner for Environment, among others.

The 2016 Ikeji Arochukwu was given extensive media coverage both in the print and electronic media in Nigeria and globally.

Many described Eke Ekpe 2016 as the best organised in more than 30 years. They gave kudos to the organising committee led by Dr. Orji Ogbonnaya Orji

That this nightmare may end!

In the recent past, Arochukwu has been in the news for the wrong reasons. Visitors to the ancient town have been jolted and shocked to ...