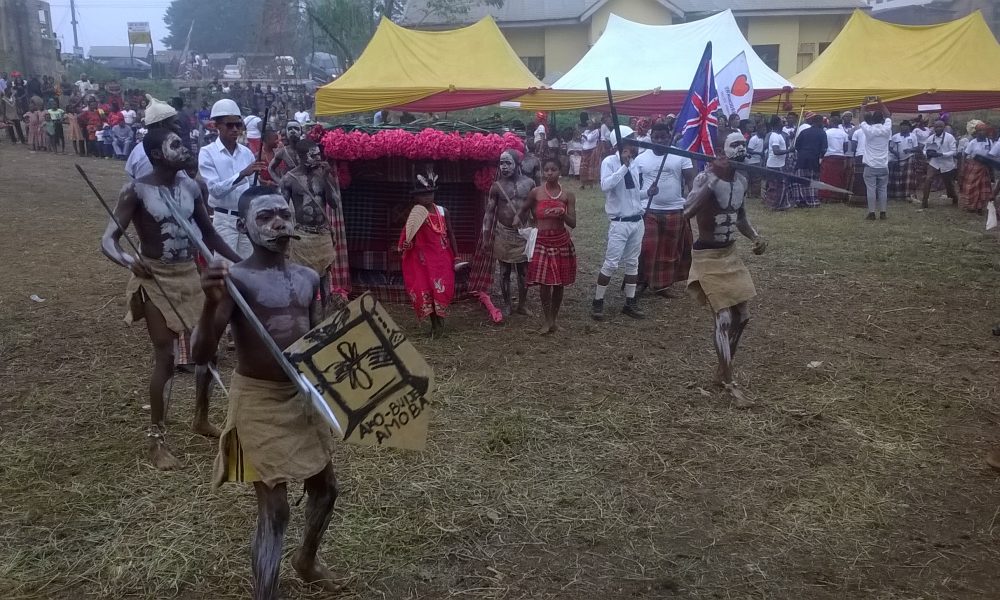 The 26th of December every year has been observed as Aro day for a very long time. The exact date as at when it started cannot be easily ascertained but to suffice to say that it may have been over one hundred years. Adding credence to the fact were archival materials released to the planning committee of the 2016 celebration by Ezeogo Agbagwu village, Mazi Isaac Onoh. Some of the photographs released to the planning committee by Mazi Onoh, had the likes of the man of timber and caliber and political juggernaut, Dr. K.O. Mbadiwe, Mazi L.N. Obioha, Mazi TK Utchay and their likes at the celebration of Aro day in the forties with the legendary Eze Aro, Mazi Kanu Oji as the proud host.

Other Aro communities in the Diaspora are not left out as they have keyed in and celebrate their day on the same 26th , earlier or later.

The 2016 Aro day was a different one. It was the first in the administration of George Ezuma led Nzuko Aro and for the first time, an event brochure was printed (note that in the past when brochures were printed , award ceremonies were held) and also for the first time, Aro day was chaired by two engineers in the persons of Otumchere Oti and Alex Ezumah.

The organizing committee led by Nwosu Nwaka, 2nd Vice President General, ensured that all logistics were put in place for a befitting Aro day and it indeed turned out to be a great occasion. After the General Assembly of Nzuko Aro, the five cultural troupes which finished tops at Eke-Ekpe 2016 took turns to entertain the large crowd that gathered at Oror, the civic centre ground. The newly elected women’s wing of the union led by its President General Lady Bright Elekwa was inaugurated, while Arc. Chima Chijioke (Ugwu Aro), was bestowed with the National Patron of Nzuko Aro.

Drs. Ochi Achinivu and Okwu Joseph Nnanna, Deputy Governor of the Central Bank of Nigeria (CBN) were made Advisers to the Body of National Patrons of Nzuko Aro.

As if that was not enough, the senator representing Abia North, Sen. Mao Ohuabunwa, pledged his continuous support to the union and followed it up with a donation of N500, 000. Then came the announcement that shook the civic centre ground, Dr. Alex Otti, the All Progressive Grand Alliance (APGA) gubernatorial candidate for Abia State during the 2015 general election, announced the takeover of the civic centre project. He promised umu Aro that the project will be completed and handed over to Aro before the next Aro day celebration.

Nzuko Aro also used the occasion to assure umu Aro of its commitment to take Aro to the next level. It reeled out some of its achievements in less than one year in office the most cheering being the grading of Okobo and internal roads. It called for the continuous support of all and sundry and promised to run a transparent administration. The National Emergency Management Agency (NEMA) has assured the people of Isu community in Arochukwu Local Government Area of Abia State, who are internally displaced, ...