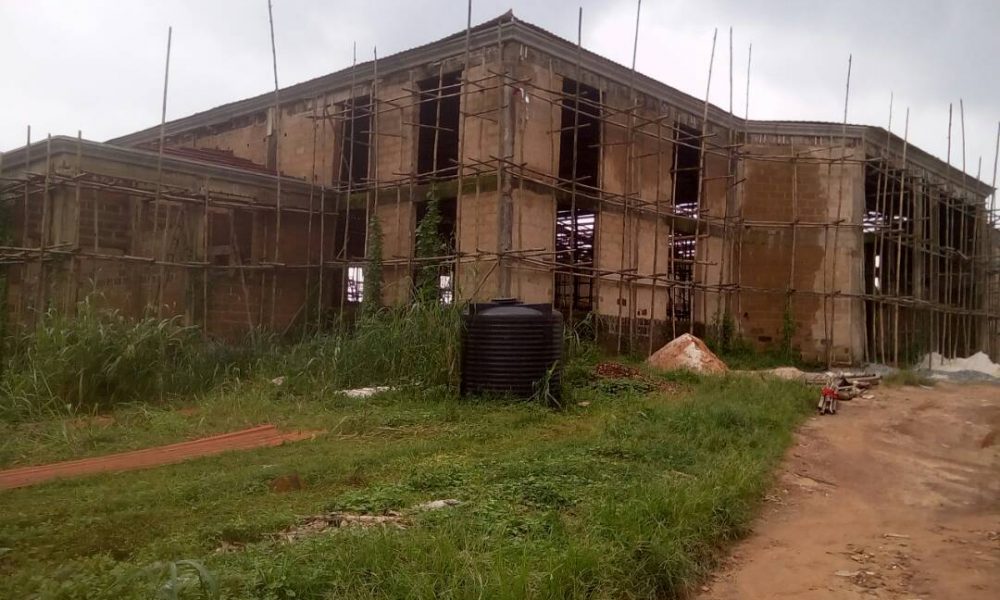 Work is currently progressing at the Aro Kingdom Civic Centre in line with the promise made to Umu Aro by Dr. Alex Otti (OFR) at the 2016 Aro Day celebrations.

At the event, Dr. Otti who was the special guest of honour announced to a cheering crowd his decision to take over the project and deliver it to Aro before the next Aro Day celebration.

And in keeping to his words, work has progressed at the construction site. A visit to the site by Aro News correspondent revealed that serious construction work is on-going. On the day of the visit, block work was more than eighty five percent done, while rendering (plastering) was to commence immediately.

When asked, the contractor confirmed that all things being equal, the project will be ready by the end of November. He explained that after rendering, flooring, german floor, tiling and slabs were to follow before roofing. As at the time of the visit, concrete work for the roofing, beams, parapets and thrushes had been erected awaiting the arrival of long spans with no break for roofing.

The story of the Aro Civic Centre is literally longer than the Israelites journey through the wilderness. Conceived by Nzuko Aro in August, 1975, its foundation laying ceremony was performed in 1991 by a former deputy governor of Imo State. Since then successive administrations of Nzuko Aro had made efforts to develop the centre which plan was designed by Arc. Chima Chijioke and his Landmark Associates team.

During the tenure of Mazi Emma Kanu Ivi as President General of Nzuko Aro, the building plan was re-modified by the trio of Engr. Chinedu Oti, Arc. Emma Okoroafor and Engr. Goddy Ijomah.

Work began in earnest at the site after its foundation laying ceremony but got stalled due to various problems which beset the kingdom like the building of the Arochukwu Secretariat, building of the Abia State College of Education (Technical), boundary adjustment issues and the protracted litigation on the Eze Aro throne.

Consequently, for several years from 1975-1998, there was little or no work that took place work at the site.
Several strategies had been employed to raise funds for the project in the past. For instance, many fund raising ceremonies had been organized, Utu civic centre was sometime in the past introduced. Another approach adopted by Nzuko Aro was to rely on Umu Aro living abroad especially those in UK and the USA, to raise funds for the completion of the project and many more. In all, the above mentioned efforts didn’t yield the expected results.

It is also pertinent to note that most of the pledges made by Umu Aro towards the completion of the project were not redeemed. Some described it as a white elephant project while others didn’t believe that the project could be completed in their life time.

Recall that the Mazi Sam Ohuabunwa’s administration constructed the foundation of the centre and also successfully checked the erosion that was threatening the project as well as other works. Emma Kanu Ivi’s administration raised the beams, did block work and roofed the centre’s main hall.

Indeed many sordid stories had been told about the Aro Civic Centre project, including allegations of misappropriation of funds entrusted to some individuals in the past. However, nobody has yet been indicted.
But thankfully, Umu Aro can now heave a sigh of relief, following the intervention of Dr Alex Otti.