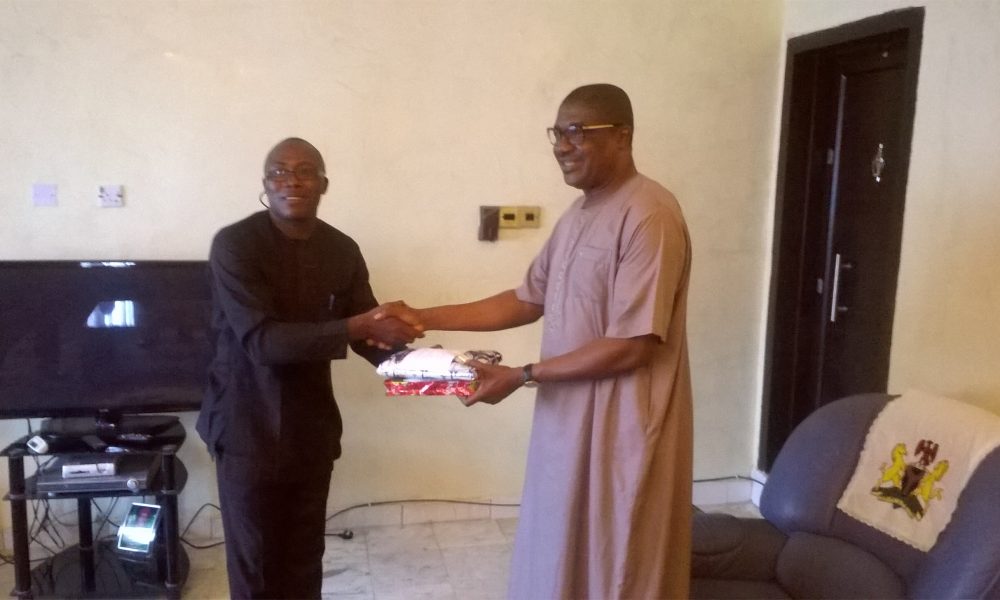 The National Executives of Aro-Okeigbo Social Club of Nigeria (AROSON), led by its Vice President, Arc. Godwin Nwachukwu, paid a courtesy visit to the Senator representing Abia North in the National Assembly, Senator Mao Arukwe Ohuabunwa on Sunday, June 25th, 2017, at his Baraki residence, Arochukwu.
Earlier on June 24, the social club had held its National Executive Committee (NEC) meeting, the first under the leadership of Mazi Emmanuel Okorafor (Naira).

Venue of the parley was Nmadiya Hotels, Oror, for which they had extended invitation to the elected political leaders of the zone to an interactive forum. Unable to attend the parley due to his late arrival to Arochukwu from Umuahia, the exco sought audience with the senator at his country home.

Speaking during the visit, Arc. Goddy Nwachukwu informed the lawmaker the club’s plans for Arochukwu and pledged its support for all elected members of constituency. He charged the senator to continue to do his best in his duties notwithstanding the challenges that come with such position. Before presenting a gift on behalf of the club to the senator, the Vice President charged him to do more on his media activities. He pointed out that most electorate are unaware of his achievements because of inadequate media coverage.

Responding, Sen. Ohuabunwa thanked the club for the visit. He pointed out that AROSON is one of the very few clubs in Arochukwu that has always stood by him during his political career. He had some kind words for the President though absent at the visit. He said Mazi Naira one of the most consistent personalities in Aro who has never failed to give him necessary support. The lawmaker thanked the club for the gift and pointed out that every Nwa Aro should automatically be a member of AROSON, promising also to formalize his membership of the club.

He recalled an episode that endeared the club to him. It was the civic reception its Enugu branch organized in his honour in 2015, at that time, his election was annulled by the appeal court and a re-run ordered, but AROSON did not waver, rather it went ahead with the function. For that singular action, the Senator said, he remains grateful to the club and its members.

Sen. Ohuabunwa used the opportunity to brief the exco on some of his activities at the red chamber of the National Assembly, as well as his efforts to see that the Arochukwu/Ohafia road is fixed for the benefit of citizens.
He also stated his efforts on the Ndi-Okereke-Abam-Arochukwu (Okobo) road and informed that the state governor visited the project site to see things for himself.