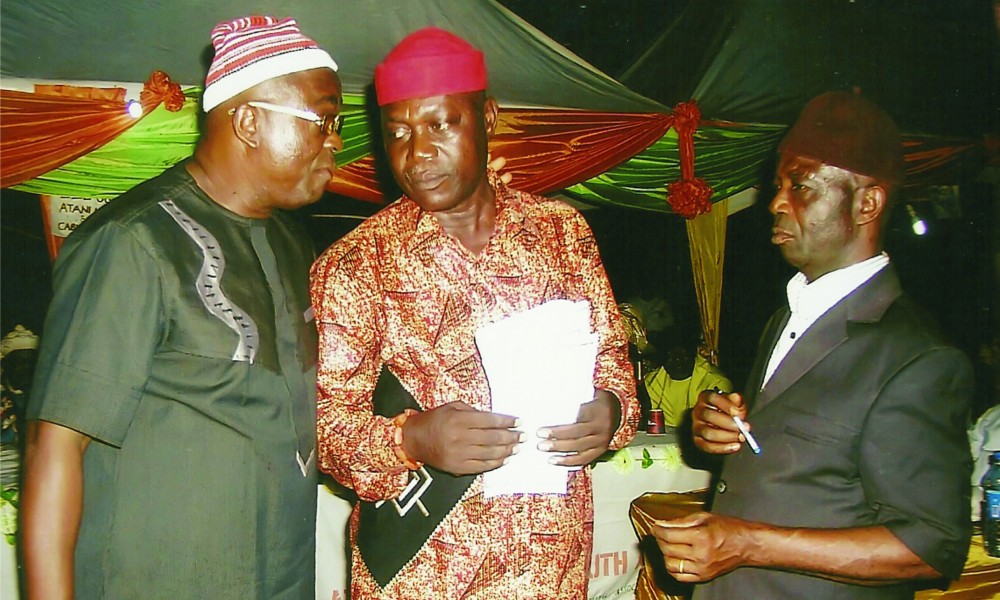 Atani day celebration has become a tradition every nwa Atani looks forward to every Christmas season and 2014 was not an exception.

About 3.00pm on the 25th of December 2014, Atani hall compound has started to wear a new look. Umu Atani, both at home and abroad have started taking their seats under the canopies designated for the branches.

In the spirit of oneness and love Umu Atani are known for, Mazi Emeka Okoronkwo took it upon himself to sponsor the event for the year, while his brother, Sir Ike Okoronkwo chaired it. Eze Ogo Atani, Mazi Charles Kanu was also on ground to give his fatherly directive. The year’s get together was not business as usual it took a new dimension. No awards was given, rather, the concern for unemployed  Atani youths was the business for the day. The event which was anchored by Mazi Chekwas Oti has the creme de la creme of Atani in attendance.

It was agreed that unemployment has always been a harbinger of youth restiveness. In order to cub this delinquent attitude from her youths, a fund raising was initiated to institute a lasting youth empowerment program/ project which will equip  the youths and make them independent and as well, responsible citizens. To give their approval to this laudable project, Umu Atani present   enthusiastically donated various sums of money to kick start it, and promised to do more.

All the donors who spoke on this special occassion of fund raising to support Atani youth empowerment; agreed on one thing-” An idle mind is the devil’s workshop”. The chairman also called on the President General of Atani Welfare Union, Sir Dozie Udensi to see to it that,it will not be an empowerment of sharing money, at the end of the day, we find ourselves back to square one.

To that effect, Sir Dozie promised to bring his experience as the Special Adviser to Imo State governor on Poverty Alleviation to bear on it.

Eze Ogo also thanked the initiators of the project and prayed for the growth and progress of Umu Atani.

The celebrated Atani son Emmanuel Ohabunwa, who broke the record as the best graduating student in John Hopkins University America in 2012  was also celebrated. Atani youths were asked to emulate the virtues of Emmanuel.

Mazi Sam Ohuabunwa in making his contribution to the youth empowerment project, pointed out that Atani has reached the status of a town therefore should be addressed as – Atani Town.  Therefore, her youths cannot afford to be found wanting. This was promptly adopted. So, in case you have not heard, Atani is now addressed as Atani Town, not Atani Village.

The President General of Nzuko Aro, Mazi Nnamdi Udo, who came in during the occasion with members of his executive, extolled the virtues and uniqueness of Atani and lent his voice to the Atani Town bill as sponsored by Mazi Sam.He also said that Aro has declared the 26th of December every year as Atani Praise night. He said Atani was chosen to host Aro Praise night because of the uniqueness of Atani in Aro traditional matters.

He also announced the unveiling of the statue of the only Aro Queen, Queen Mgbafo Udo Omini on the 26th of December 2014 being Aro Day at the Civic centre in Oror.

Branches of Atani Welfare Union were well represented. A band rendered melodious tunes to add to the fun of the day.

The Next President-General: Neither Machiavelli nor Ivan De Terrible

The build- up to Nzuko Aro general elections is gradually picking momentum. In less than a year, a new executive committee of the influential cultural ...