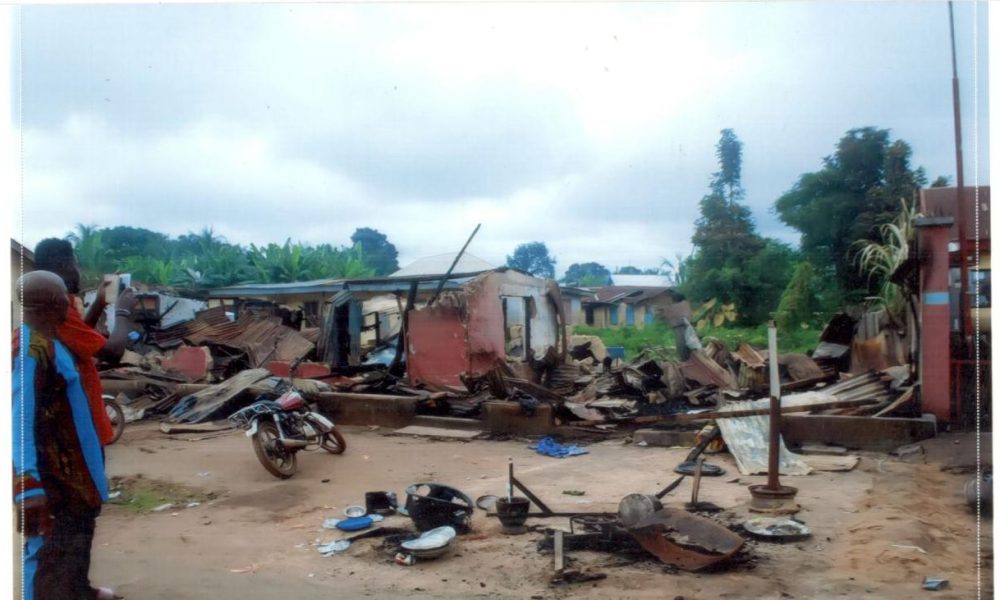 According to an eye witness Mazi Obinna Onwumere Ulo, the accident occurred at about 7pm after the manager of the station pleaded with a road side ‘’Akara woman’’ to put off the fire she was using to fry her ‘akara’ while they discharge their product. But unknown to them, the ‘Akara woman’ didn’t heed to the plea and the station went up in flames as the tanker with registration number KJA O9 XJ was discharging its product.

Continuing with his narration, Mazi Ulo stated that it took the experience of the tanker driver to limit the damage as he drove the vehicle with flames out of the station and went further by opening the covers of the tanker to avoid an explosion. It however took the efforts of sympathizers who attacked the fire with sand, water mixed with detergents and fire extinguishers to limit the damage but that was before the shop of an electrician, Mazi Augustine Nwosu, Nnennaya Onwuasanya, a tailor cum fashion dealer, Mazi Okoro Nnaji, an animal feeds dealer and Chinwendu  Amaechi, a hairdresser had already being burnt. The Eze Ogo Asaga, Mazi Umahi Igwe and the youth President,  Okereke Christian Chinedu collaborated the account given by Mazi Ulo and went further to add that most shop owners within the vicinity made frantic efforts to remove their wares while the ‘Akara woman’ who was alleged to have caused the fire incident fled the scene with her husband and children on sighting men of the Nigeria Police.

Meanwhile members of Aro-Okeigbo Social Club of Nigeria (AROSON), home branch visited the scene on the Monday, the 11th September 2017, to commiserate with the victims of the incident while also assessing the extent of the damage. It promised to bring their plight to the national leadership of the club, other bodies and government agencies. They were led by the Chairman, Sir Godswill Elekwachi, who was accompanied by Hon. Ndy Nwafor, its Secretary, Elder Okey Ibe (Okey Unique), Mazi Godwin Nnanna,Ogbonnaya Agwu, Lawrence Orji, Hon.  John Okoro, Mrs. Chidinma Okoro, Mazi Luke Kanu amongst others. The club thereafter, made a donation of N40, 000 (Forty Thousand Naira only) to the victims through Mazi Luke Kanu.