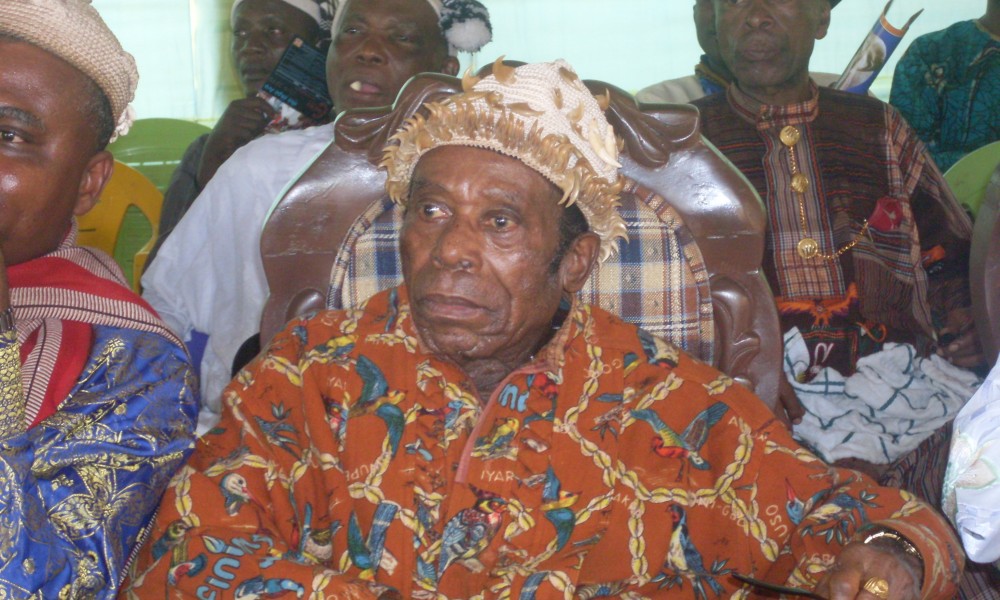 Praise God! Eze Aro, Mazi Vincent Ogbonnaya Okoro, CFR, celebrates his twenty two years (1995 – 2017) on the famous ancient throne of Arochukwu Kingdom. He was, in 1988, chosen to ascend the throne of his forefathers but was not officially crowned the Eze Aro until 31st May, 1995, about 7 years in waiting. He was crowned by the then Eze Ibom Isii (late Mazi Okorafor Imouh, whose duty it was to crown him), at a brief public ceremony held at Amaikpe Aro event square. The coronation of Mazi Vincent Ogbonnaya Okoro on May 31st, 1995 automatically brought to an end the hitherto protracted Eze Aro stool tussle that had lasted for 7 years in the high court, Ohafia.

Born on 26th March, 1932, Eze Aro, Mazi Vincent Okoro is now over 85 years old. He started his quest for education around 1939 at Jubilee School Arochukwu but completed his primary school education at Aggrey Primary School also in Arochukwu. He later left for Ibadan where he completed his Secondary School education at Ibadan Boys’ High School. He got employed by University of Ibadan and served as a laboratory technician in the Faculty of Agriculture. In 1960 he left Nigeria for London to further his education. At the end of his studies in several Colleges in London, he graduated with two Advanced Certificates (i) in Microbiological Techniques and (ii) in Laboratory Administration, both of City and Guild of London. He later became a Fellow of the Institute of Science Technology, (FIST) London. He returned to Nigeria and was appointed a pioneer Head of Department of Laboratory Technology at University of Nigeria Teaching Hospital (UNTH), Enugu and also a pioneer Technologist in charge of third year medical students of the MBBS class. Besides, he served as a part-time lecturer in Medical Microbiology at the School of Nursing also of the UNTH. He finally retired as Chief Medical Laboratory Scientist at the UNTH in 1988.

He was motivated to retire by a written request, dated 1st August, 1988, and jointly signed by Dr Nwakama Okoro (now late), Mazi Elder Isaac Onoh and Mazi Ezumah Okoro (now also late), each as the then head of their respective kindred unions, namely: Okennachi, Ibom Isii and Ezeagwu, for the entire Arochukwu kingdom. They asked Mazi Vincent Okoro to retire and return home to become the next Eze Aro. Vacancy for the next Eze Aro became obvious after a full year observation of the traditional mourning period for the late last Eze Aro, Mazi Kanu Oji, CFR who had joined his ancestors on 26th June, 1987 after he had served Aro kingdom for 73 years on the throne. Late Mazi Kanu Oji was crowned Eze Aro in 1914 at a teenage age of 14 years. But he could not take full control of the throne until he attained a full age of 21 years. And that was in 1921, exactly 7 years after his coronation. It was then that he performed his first important public function as Eze Aro as he chaired, for the first time, a vital meeting of Aro Traditional Leaders Council.

After Mazi Vincent Okoro retired from UNTH as requested by his people, he could not be crowned as Eze Aro on 26th December, 1988 Aro day, as was planned by both Nzuko Aro and Aro traditional leaders. Two controversies had erupted that worked against the planned imminent coronation of Mazi Vincent Okoro. First was the Ezeagwu Kindred’s complaint against the late Eze Aro, Mazi Kanu Oji, who they had accused of always denying them of their rights to a share of any animal slaughtered for Aro in the past. They insisted that unless their traditional right to a specific share was henceforth agreed to be given to them by Okennachi kindred, they (Ezeagwu kindred) would not participate in the ceremonies of both the final burial rites of the late Eze Aro and the planned coronation of the incoming Eze Aro. This controversy lasted quite awhile before a truce was reached through Aro intelligence dialogue mechanism. But soon after this truce was achieved, another dispute erupted that led to filing of a court case on 3rd August 1988 by Mazi Kanu Idei, just 2 days after Ndi Aro had sent their written request to Mazi Vincent Okoro to retire. Mazi S. G. Ikoku was the mastermind of that court action which eventually stopped the proposed coronation of Mazi Vincent Okoro slated for 26th December, 1988. Mazi Kanu Idei had made a legal claim that he was the proper person to occupy the Eze Aro throne instead of Mazi Vincent Ogbonnaya Okoro. All efforts made by various Aro groups and some well meaning individuals to resolve this legal tussle amicably out of court failed. The case lasted for 7 long years in the high court but was technically struck out on 31st May, 1995, following the unfortunate sudden death of the complainant, Mazi Kanu Idei. To avoid any further embarrassment, some Aros, relevant to the occasion, quickly gathered at Amaikpe square that same 31st May, 1995, and publicly crowned the incumbent Eze Aro as Arochukwu custom demanded. This year, 2017, consequently marks the 22nd anniversary of that historic event. And to God be the glory.

It is on record that Nzuko Arochukwu, under my leadership, on 26th December, 2005, had celebrated in grand fanfare, the 10th year anniversary (1995 to 2005) of the incumbent Eze Aro’s ascension to the throne. This 2017 has therefore brought in additional 12 years to his continuous reign as Eze Aro after that 10th year anniversary celebrations of 2005.

In Aro traditional systems, 12 is a unique and very important number because it is a product of either 4 by 3 (ato) for ‘Ngwa Ato Aro’ or 2 by 6 (isii) for ‘Ngwa isii Aro’. It applies also for “Okwa isii” Aro. “Ngwa Ato” and “Ngwa Isii” relate to either a reference to some traditional set of items that are usually, (i) demanded for presentation to some people for some specific purposes such as “ikpo oku” – a call for a group or family meeting, or (ii) imposed as a “fine” to appease for any civil wrong committed by an offender found guilty in a traditional Aro conflict resolution court. Whereas, in Aro traditional marriage rites, we talk about “Okwa Isii Aro”. This refers to a generally accepted bride price for any true Aro bride. The Okwa isii Aro is made to be an equivalent of “£12,12 shillings”, usually divided into six equal parts, put into 6 special bronze plates; these 6 special plates (Okwa isii) are each carried by 6 elegant ladies in company of 12 men to settle bride price of a ‘new bride’ during a full Aro traditional wedding. The 12 men that accompany the Okwa isii usually consist of 6 “old” men carrying 6 tall strong walking sticks and 6 younger men carrying 6 round plantain leaves-pads upon which 6 big pots of traditional palm wines were expected to stand for servings at a full Aro traditional marriage event. You can now see why and how 12 as a number or 6 x 2 has some special value in Aro traditional system.

And so, it is important we remember to celebrate with Eze Aro in this 2017, his 85 years on earth and 22 years on the throne, following the special additional 12 fresh years God has added to his reign after his 10th year anniversary which we all had celebrated in 2005. We therefore congratulate His Majesty, Mazi Vincent Ogbonnaya Okoro, CFR, for all these special blessings of God. Obviously, it has been some wonderful 22 good years of mixed events and happenings in Arochukwu kingdom since he ascended the Eze Aro throne. Aro kingdom has witnessed some successes and of course experienced some challenges here and there within these 22 years of his reign. In life, no one wins it all times. You win some, and you lose some. We must thank God for the long life he has been blessed with. Because not all in Aro had expected that he, Eze Aro, would last up to these 22 long years on the throne may be because of the many challenges that had trailed his reign from the inception. But God in His infinite Love has shown him great mercies and granted him long life in age and long reign on the throne, including the wherewithal to forge ahead so far. And to God be the glory.

Now at 85 years of age and 22 long years on the throne, our Eze Aro should wisely begin to put the kingship house of Aro kingdom in order. A lot of issues need to be resolved and settled in the interest of the kingdom. Many fences need to be mended. People in conflicts need to be reconciled. He must be seen a true father of all Aro citizens and residents. Not minding many challenges that have been confronting the kingdom, Eze Aro, as a great leader, should now rise up to the occasion and work towards resolving amicably all or almost all of the controversies so that true peace may reign in his kingdom, Arochukwu. We appreciate God for being with him all these years. And we pray that God will guide him to lead us more successfully and peacefully with great wisdom.

Surely Eze Aro needs our prayers as he needs much greater wisdom of God this time around; he also needs the understanding of many of us more than ever before. Therefore let all the bickering and all strife amongst us stop henceforth. Let us all unite to push for things that will bring progress and development, love and peace to Arochukwu kingdom under his traditional leadership watch. Eze Aro, we love you and still affirm that “Ako bu Ije”. Once again, congratulations on your 85 years of age and 22 years on the throne.

Mazi Emmanuel Chiadikaobi Okoro who passed on on the 6th of March, 2017, was interred at his compound in Ugwuavor Arochukwu on the 19th of ...