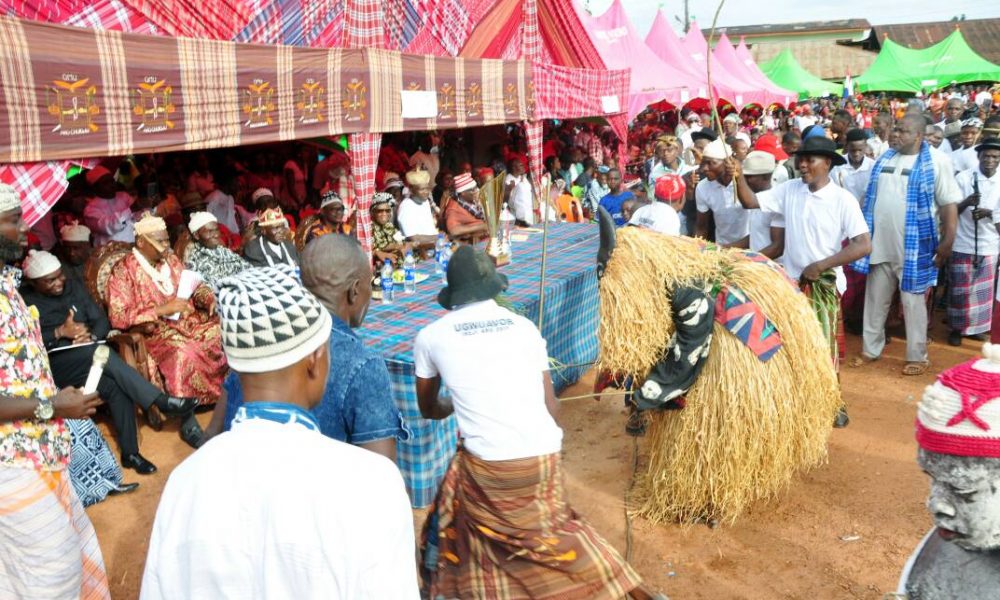 Obinkita village was no doubt the cynosure of all eyes at the 2017 Eke-Ekpe Arochukwu celebration which climaxed on Sunday, September 24, 2017 at Amaikpe Square, Arochukwu, Abia State.

The grand finale of the Ikeji Arochukwu was threatened by three major factors that reared its ugly head in the kingdom and the entire Abia State. First was the disagreement between Ndi Eze Ogo and Eze Aro’s representative, Mazi Oji Kanu Oji.

Ndi Eze Ogo, in one of their correspondences to His Majesty, Mazi Ogbonnaya Okoro (CFR), Eze Aro, threatened not to sit with Mazi Oji Kanu Oji at any function or meeting. It took the intervention of notable Umu Aro including the Body of National Patrons of Nzuko Aro for the Eze Ogos t accepted to sit with Mazi Oji at Ikeji, thus resolving the lingering empasse.

The second incident was the issue of the constitution of a parallel committee by the palace to organise Ikeji. This situation made Nzuko Aro suspend most of the activities it had planned for Ikeji 2017. It even necessitated the union writing a letter to its Body of National Patrons to intervene. A letter received by the union from the chairman of the patrons, Prof. Okoro Ijoma on the 1st of September, 2017 authorised the union to go ahead with its plan for the festival.

Third, was the issue of Operation Python Dance (Egwu Eke) declared by the Nigeria Army in Abia State barely one week to Ikeji. In other to ensure the safety of Umu Aro who were expected to return from far and near, Nzuko Aro proposed to scale down activities, and maintain a low key Eke Ekpe, for security reasons. But the position was rejected by Ndi Eze and other prominent Umu Aro. Thus the union was requested to continue with its elaborate plans for the festival. In their words, Eke Ekpe must go on; no harm will befall Umu Aro, or the kingdom. True to the advice of Ndi Eze, the mammoth crowd that turned out at Eke Ekpe overwhelmed all the security apparatus engaged for the event. One after the other, Umu Aro and guests filed into Amaikpe Square and took up all available chairs in more than thirty canopies and over three thousands chairs hired for the event. Vendors did brisk business as people bought almost everything in sight.

After the arrival of Ndi Eze, the event proper commenced. Chairman of the day, Prof. Okoro Ijoma, called for unity in the kingdom while the Chief Presenter, Mazi Okoronkwo Asonta encouraged the youths to always participate in Aro rich cultural activities.

The politicians could not be outdone. They, expectedly, made their presence felt at the arena with one message or the other for the people. The representative of Senator Mao Ohuabunwa, Mazi J.J Okoro, Deputy Secretary of Peoples Democratic Party in Abia State, assured the people that issue of bad roads into Arochukwu will soon be a thing of the past. Hon. Luke Ukara of the Abia State House of Assembly and Uko Nkole of the House of Representatives also spoke in like manner.

The onerous task of deciding which Ogo had the best performance fell on the shoulders of Hon. Nnuola Izuogu Okereke, Praise Genesis and Aro News Managing Editor, Ugo Okoro. After the Ogo by Ogo performance, the trio was unanimous in their decision as they adjudged Obinkita with 35 points as the best. They were followed closely by Ujari with 31 points. For the third position, Amoba and Atani tied on 25 points apiece. After a little deliberation with the organizers insisting that one Ogo must emerge third instead of a tie, Amoba clinched the third position after a few adjustments by the judges.

However, Amannagwu village was absent in this year’s Eke Ekpe on protest. Its grievance, Aro News gathered, was from an unredeemed prize by the immediate past administration of Nzuko Aro.  The Ogo has equally written the present administration, asking it to go through the records and resolve the issue. The Ogo however, returned the third prize trophy it won last year and collected the tradition Omu from Amaikpe but did not present any dance/masquerade group.

Abam war dance was the guest performer, while Ekpe Aro procession was a delight to watch. Eketensi performed by Isimkpu village, as usual, made a rowdy entry and exit from the arena. As in 2016, the weather was respectably clement.

Ikeji Arochukwu 2017 witnessed another dimension in the area of media coverage. For instance, an NTA crew was on ground several days before Eke Ekpe visiting the different tourist sites as well as covering Afor Osu and Nkwo Ekpe activities. And on Ekekpe day, the event was streamed live on YouTube and other social media platforms to the global audience. NTA Network crew also made its presence felt.