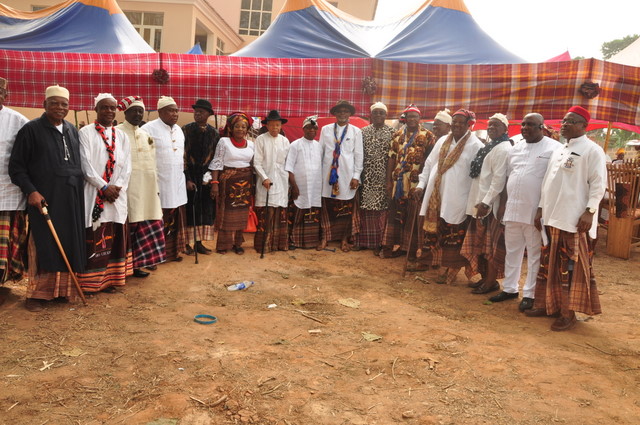 December 26, 2017 remains a day Arochukwu people of will live to remember and relish. It was a remarkable day in the kingdom, as a project started several years earlier was eventually completed and handed over for community use. The iconic Arochukwu Civic Center was formally opened on December 26, 2017, having been taken over a year earlier by Dr. Alex Otti, who mobilized funds and coordinated its completion. Before Otti intervened, the project had stalled for a record 42 years.  The magnificent building – with its splendid interior – is located opposite the Eze Aro Palace in Oror village. Today, it stands as a cynosure of all eyes and a testament of the ‘can do’ spirit of the Aros in matters concerning their ancestral fatherland.

The unveiling ceremony climaxed the 2017 edition of the yearly Aro Day celebration. On arrival, Dr Otti was ushered into the arena by the leadership of Nzuko Aro, and the women’s wing with dance and praises.  At the opening ceremony, the Eze Aro in Council offered prayers to the ancestors and prayed for the kingdom and the good of its people. Speaking at the handing over ceremony, Dr Otti explained that he is not the one that built the Civic Centre, but only assisted in ensuring that it was completed.

He thanked the sons and daughters of Arochukwu who contributed immensely to the project and urged others to also show solidarity by taking up other sections of the project that are still outstanding. He stated that an epitaph will be placed on the building indicating the names of those that made contributions for the project.
He also listed areas that need attention to include fencing, lighting and cooling systems, musical equipment and public address system, furniture among others.

The man who designed the building, Architect Chima Chijioke, spoke about his dream at the time. He said he had a vision to create an iconic meeting place for all Aros, which he vigorously canvassed to convince the leadership of Nzuko Aro in 1975.

For him, it is now a thing of joy that the project has finally seen the light of the day. He expressed gratitude to everyone that contributed to the project, which he said has added to the glory of Arochukwu Kingdom.
In his own speech, Akwa Ibom State Governor, Mr. Udom Emmanuel, who was represented by the Commissioner for Housing and Special Duties, Mr. Akan Okon, identified with the project, saying that Akwa Ibom State has always taken the welfare of Arochukwu to heart because they (Aros) are friendly neighbours. He buttressed his submission citing example of the Ikpe- Ikot- Nkon road linking Abia State through Arochukwu, which his government is constructing.

Okon said his governor is committed to that road, knowing that it will benefit both communities.
He gave the assurances of his principal that the road under reference will be unveiled not later than May, 2018.

The Senator representing Abia North, Mao Ohuabunwa, expressed joy that the Civic Centre was finally ready for use and pledged to provide the cooling system.

To add to the frenzy mood of the day, a prominent daughter of the kingdom, Madam Delight Sunday-Anicho donated 250 insecticides treated mosquito nets to help tackle malaria scourge in the kingdom, while the President General, Nzuko Arochukwu Women’s wing, Lady Bright Elekwa thanked Delight for the donation and other umu Aro to contribute to the growth and development of the kingdom.

Banker and politician clocked 50 on the 18th of February. He was educated at Ngwa High School; Secondary Technical School, Okpuala Ngwa; University of Port ...