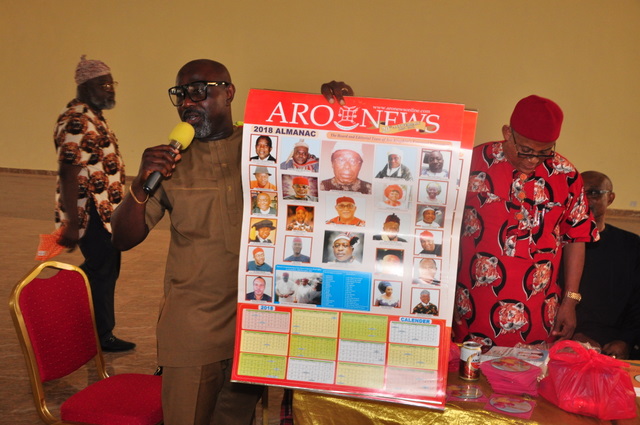 Arochukwu was in a festive mood on 29th December, 2017 as its prominent sons and daughters came out in their numbers to celebrate Aro News – the kingdom’s foremost newspaper which has for the past twenty years championed community journalism at its best. The event was the first to take place in the main hall of the Civic Centre that was unveiled on December 26.

Activities that marked the occasion included a maiden lecture, public presentation of volumes 1, 2 and 3 of Aro News Book series – perspectives on Aro History & Civilization, the splendor of a great past, 20th anniversary almanac, dinner, award for community development, etc. The Aro News inaugural lecture was led by two eminent scholars, Prof Suleiman Oji of the Law Faculty of Usman Dan Fodio University, Sokoto who is also a visiting Professor at Gregory University, Uturu and Emeritus Professor of History, Okoro Ijoma.

Both Professors alongside, the Chairman of the occasion as well as the President General of Nzuko Arochukwu, Mazi George Ezuma and Chairman, Board of Directors of Aro News Publications Ltd, Mazi Emma Kanu Ivi;  jointly presented the three books written by Dr. Azubike Okoro and Mazi Ben Ezumah  to the public.

A veteran journalist, Dr Orji Ogbonnaya Orji espoused the editorial policy of Aro News and the secret that has kept the newspaper on the news stand for unbroken twenty years. He thanked Aros in Nigeria and in the Diaspora for their unflinching support to the project.

Also at the occasion, the audience celebrated the founder/pioneer publisher of Aro News, Dr. Azubike Okoro, for his pioneering efforts and a special song composed to mark the 20th anniversary event was presented to the audience.

Three prominent Umu Aro were honoured for their contributions towards the development of Aro kingdom. They are Dr. Alex Otti; Mazi Ike Okoronkwo and Dr. Emma Nwadeyi. They were presented with plaques in appreciation of their contributions to Aro development. Dr. Otti was however represented by Mazi Ogbonnia Okereke, while Mazi Ike Okoronkwo and Dr. Nwadeyi were present with their spouses and well wishers to receive their awards.

Aro News management equally made it clear to the award recipients that no monetary value was attached to their awards and thus no donations were required from them.

Responding, Mazi Okoronkwo, Dr. Nwadeyi and Ogbonnia Okereke thanked Aro News for the recognition. They were surprised, and it was unusual in the contemporary Nigerian society not to ‘appreciate awards’ with cash donation. They thanked the management for the honour and pledged their continuous support to the tabloid.

The occasion was rounded-off with refreshments.