How Precious emerged Most Beautiful Girl in Arochukwu 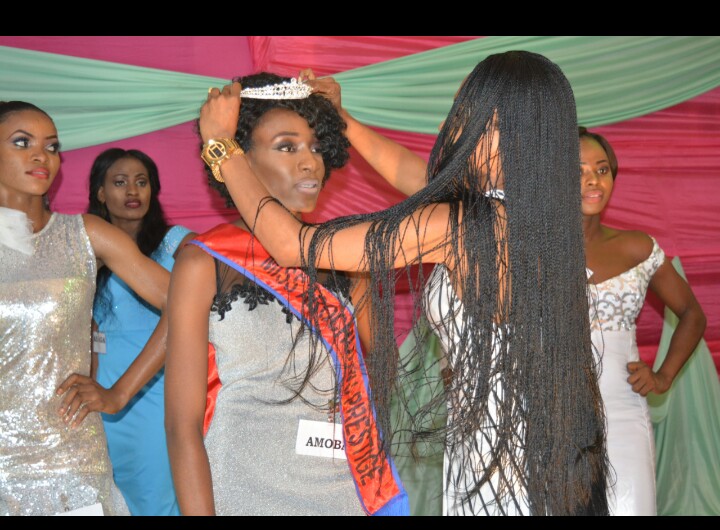 Miss Precious Okoronkwo was on the 29th of December, 2017, at Nmadiya Hotel, Oror, crowned the first Most Beautiful Girl in Arochukwu – Queen of Okeigbo 2017. It also featured the first maiden Arochukwu Impact Award (AIA).

For over one week, the ten qualified beauty queens were taken through various stages of beauty contest. They were taught how to walk, swim, design their various costumes, aerobics and were equally taught aspects of Arochukwu history.

On the D-day, the hall of Nmadiya Hotel was packed full with guests who came to unwind and have fun in the spirit of the Yuletide.

Indeed, several of the guests stayed outside as the hall could not contain the crowd. Even the gate fee of N1000 per guest did not deter people from trooping into the hall to catch a glimpse of the damsels.
The local costume parade, the swim suit and evening gowns parade drew cheers from the crowd. The question and answer session as well as the sale of Aro News by each of the contestants was no less interesting. Some of the contestants sold out Aro News allocated to them in a few minutes at the cost of N1000 per copy.

Miss Ugbo sold out her Aro News copies in a few minutes and her fans kept on putting money into her basket, which obviously had no more papers in it. That was a sign that she was the clear favourite. After various stages of the competition, with each of the contestants displaying sound knowledge of recent happenings in Arochukwu and its history, Miss Precious Okoronkwo from Amuvi village, though representing Ugbo at the competition, emerged the winner. She came top on the cards of the four judges, Lady Charity Okwuobasi Udensi (CEO Apples Restaurant and April Apparels), Miss Deborah Emeruwa, Miss Adaobi Okoroji and Barr. Chikadozie Girlie Nwafor, picked by the organizers for the competition. These judges were not given prior notice of the duties they were to perform on the day, but were picked by the organizers at the venue to avoid accusation of bias.

Award winning OAP Jasmine of Moment 98.7fm and Arochukwu’s finest Stanley were the official host of the event while MC Ukpaski (UK) was there to spice up the evening.  There were special performances by Emmanuel Theater Academy (winners of 2016 Eke Ekpe day celebration), Arochukwu first son, Recipy, Di clip, Nak C, P. P, Indomie amongst others.

Speaking with Aro News after the competition, the newly crowned Miss Aro thanked God for making it possible for her to achieve the feat. She stated that she was very confident of emerging victorious at the pageant because she was well prepared for it. According to Precious, when she picked Ugbo as the village she was to represent at the contest, she took a familiarity tour of the village and interacted with the Eze Ogo to find out more about the village.

Precious left Ugbo with a promise that she will emerge the Most Beautiful Girl in Arochukwu and after the competition, she will return to Ugbo village with her crown to felicitate with the Eze Ogo and the people, a promise she kept, according to Aro News findings.

Information reaching Aro News indicate that due to the success of the event, preparations are in top gear for the 2018 edition. It was learned that many people are already making enquiries about the next edition. Entrepreneur and businessman clocked 65 on the 14th of May. A native of Atani village, Sonny attended Okrika Grammar School; National High School, Aba and ...