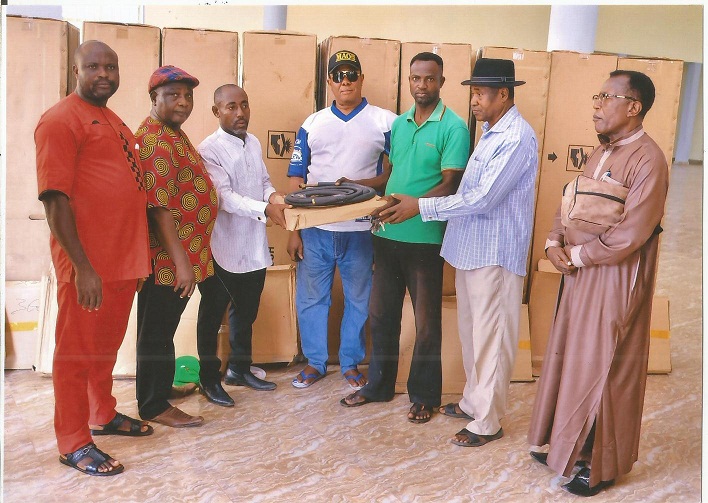 By the time the lorry brought the air conditioners to the civic centre, Mazi Jerry Onwumere, the home branch chairman of Nzuko Arochukwu, the secretary, Bassey Okoroafo and Okereke Iroegbu at about 03:09pm, the branch public relations officer, were on hand to take delivery of the donated air conditioners.

Others who had come to welcome the people who brought the air conditioners were Mazi Luke Nwabueze Kanu, a member of the home branch of Nzuko Aro and former chairman of PDP chairmen, Arochukwu LGA; the youth leader of PDP, Arochukwu LGA, Mr Godwin Ogbonna (OGSM founder in Arochukwu and a native of Ugbo village), and Mr Ejike Okoronkwo (of Amuvi, Arochukwu.)

In an interview he granted Aro News, the Nzuko Aro branch chairman, Jerry Onwumere, had expressed happiness at the development and thanked Senator MAO for his goodwill. He promised that the air conditioners would be mounted for effective use by the management of the civic centre so that those who use the hall will be benefitting from the cool breeze the air conditioners will be bringing in the exhaust system, as the hall was big enough to contain many people during occasions.

On the question of how to safeguard the hall so that thieves do not steal from it now and in future, the chairman assured that efforts were being made to employ the services of a steward/caretaker in that regard. This position was corroborated by some other members of the executive of the Nzuko Aro branch.

Speaking further to Aro News on the occasion, a cross-section of those interviewed poured encomiums and eulogies on Senator MAO for his kind gesture and described it as ‘an act of care’ and urged those who were in charge of the management of the civic hall to ensure that no property of the civic hall would be stolen, including those donated by well-meaning Aro sons and daughters.

In another development, Aro News stumbled on some workers of the Federal Roads Maintenance Agency, FERMA, at the junction between Obinkita, Ugwuavor and Isimkpu villages effecting patches on the road on Thursday, 29 November. On enquiry, one of the workers who were pouring asphalt on the road and who pleaded anonymity, said they ‘were directed to patch the road by the management of FERMA in honour of the late Chief Emma Nwokoro (Hapel) who was one of our major contractors while alive. We should have completed the patching before his burial but could not do so, so we are continuing.’

Pressed to say where the patching started and where it would end, the respondent failed to do so, insisting that ‘we are patching where we were directed to patch. I don’t know where it stretches to and when it will end. But we are doing our work!’

The Institution Of Uzi In Arochukwu – What It Is, What It Is Not

To many Aro men and women (lassies inclusive), uzi is one concept that is misunderstood. The mere mention of the word signifies an age-long institution ...