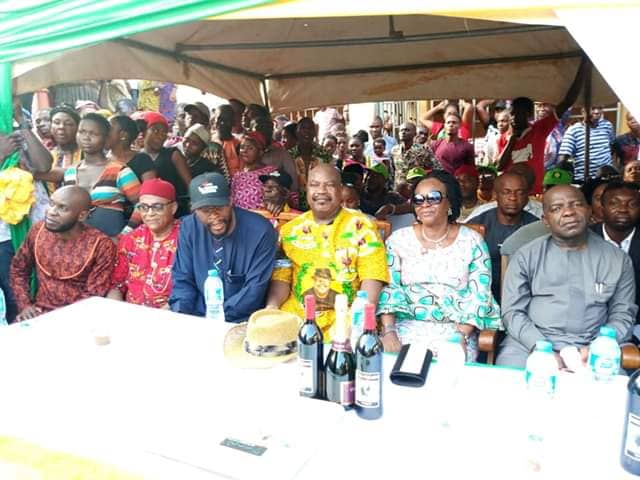 Thousands of people from within and outside Arochukwu LGA on Sunday, November 19, 2018 trooped out to Amaikpe Square in Arochukwu to be part of a civic reception organized in honour of a foremost banker and the 2019 Abia APGA governorship candidate, Dr. Alex Otti, by a support group led by a US- based medic, Dr. Emma Nwadeyi.

Welcoming guests to the reception, Chairman of the Organizing Committee, Mr. Ogbonnia Okereke, thanked all for trooping out en masse to be part of the gathering, stating that it was a mark of appreciation of the sacrifices made so far by Dr. Otti in his quest to reposition Abia State.

In his speech, the Chief host, Dr. Emma Nwadeyi poured encomiums on Dr. Otti, describing him as a first class technocrat and wealth creator, who possesses all that is required to salvage Abia State

He described Otti as a silent achiever and a philanthropist of note who ensured that many Abians were gainfully employed in the banking industry when he was in the bank, without making noise about it.

Nwadeyi, who decried the alarming decay in infrastructure and general stagnation in the economic development of the State, urged Abians not to allow their spirits to be dampened by what happened in the 2015 election, assuring that 2019 would be a year that Dr. Otti will wipe their tears.

Also speaking, a chartered accountant and one of the organizers of the reception, Mazi Emma Kanu Ivi and a former Chairman of Arochukwu Local Government Area, Mazi Nkem Okoro praised the people for remaining passionately supportive of Dr. Alex Otti, and encouraged them to remain strong.

Mazi Ivi listed, amid applause, several completed and ongoing road projects attracted to Arochukwu and Isiala Ngwa South LGAs by Dr. Alex Otti, and encouraged them to keep hope alive as the former banker prepares for greater exploits in the State.

Crown prince of Arochukwu, Rev. Joshua Kanu Oji prayed for Dr. Otti and handed him over to God. He described Otti as a great Nigerian, adding that Abia State will be better with his leadership.

Addressing the excited crowd, Dr Otti thanked the people for trooping out en masse to honour him, restating his avowed commitment to ending years of sorrow caused by leadership failure in Abia State.

Dr. Otti made it clear that governance is all about antecedents and track record, and insisted that those who should lead Abia must be people who can show their past success stories, and not career politicians who see it as a means for economic survival.

He seized the opportunity to thank Abians once again for their support in 2015, assuring that those who stole the peoples’ mandate in 2015 have come to the end of the road. The financial expert encouraged the people to go and collect their PVCs, assuring that 2019 would herald a new dawn in Abia State.