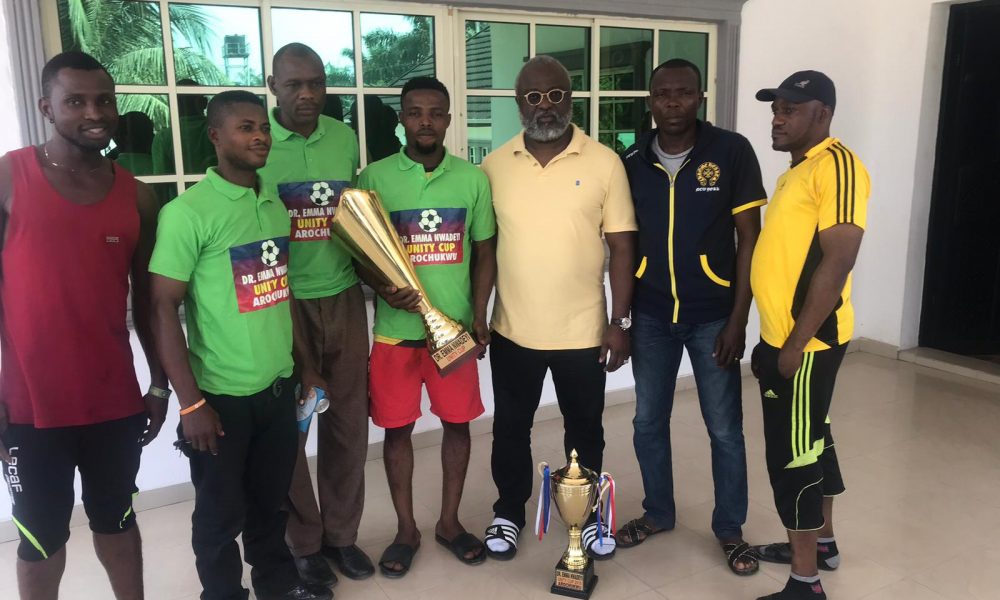 The finals of the second edition of Dr. Emmanuel Nwadeyi Football competition took place on Thursday, the 3rd of January 2019 at the football pitch of Abia State College of Education (Technical), Arochukwu.

Unlike the first edition which featured the 19 villages in Arochukwu, the second edition witnessed a match between the home based players and those based outside Arochukwu.

After a pulsating 90 minutes of action, the home based team defeated their opponents by a lone goal.

The competition’s sponsor, Dr. Emma Nwadeyi, alongside other dignitaries who watched the match, commended the high level of skills displayed by both sides. Before commencement of the match, Dr. Nwadeyi took the ceremonial kick off to the admiration of all present.

For its efforts, the home based team smiled home with the sum of N400, 000 and the giant gold trophy, while their opponents took home the consolation prize of N100, 000.

In a chat with Aro News, Dr. Nwadeyi said the 3rd edition will reverse to the old round robin format, pointing out that the planning for the second edition began a bit late, adding that that was what led to a single match being played. He stated that his desire to keep Aro youths focused, united, engaged in positive recreation and keeping them off crime informed his decision to continue to sponsor the event.

He pledged to continue to bankroll the tournament and promised soccer lovers in Arochukwu and its environs that the 3rd edition will be better.

The history of Amuvi people is based on oral tradition. There is no authenticated, written history about Amuvi people, but we faithfully regard the oral ...