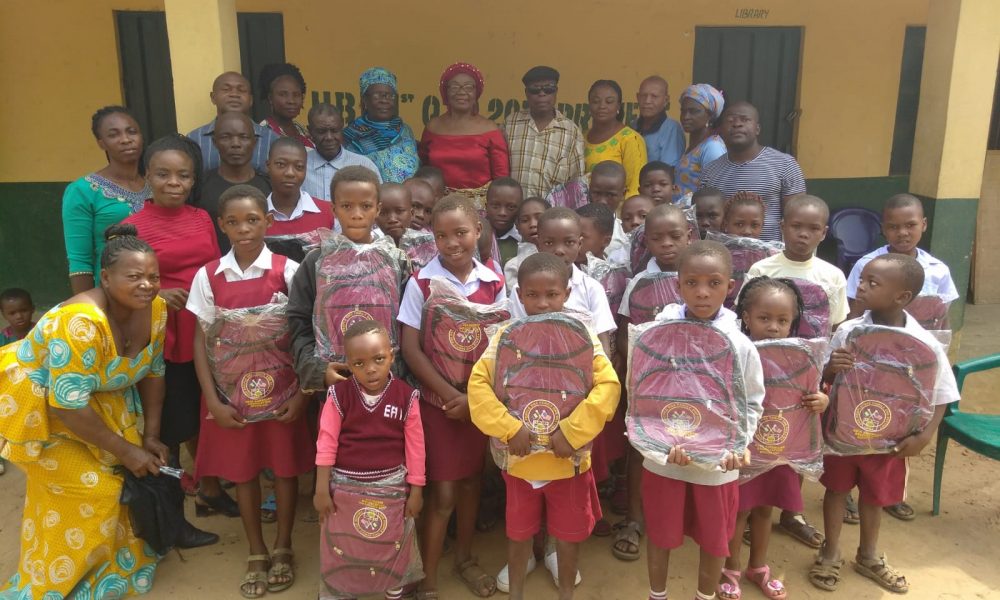 Evidently concerned by the plight of the less privileged persons back home, sons and daughters of Abia State in Diaspora under the aegis of Abia American Association Inc. Boston, Massachusetts, USA decided to intervene in support of educational empowerment of students via the provision of teaching aids and learning tools.

Tagged “Child Literacy Empowerment Project”, the group which is led by its president, Dr (Mrs.) Joyce Nwosu of Arochukwu, took the bull by the horns and mobilized resources to support the needy in various Abia communities in December 2018. The association which does not want to see sons and daughters of the state in lack of basic educational needs, procured and donated almost three thousand (3,000) “School Back Packs” (bags) which were distributed to Abia Primary School pupils across the State. And believing that the primary education level is the most important and if built on solid foundation the subsequent levels would have better chances of success, the association made it their focus and ensured that children, even in the remotest areas, are not left out.

Based on the association’s membership, the recipient towns were: Arochukwu, Abiriba, Eda, Igbere, Ikwuano, Isuikwuator, Isuochi, Nkpa, Nkporo, Ngwa, Ohafia, and Umuahia. The programme at Arochukwu took place in January 2019 and the venues were Amuvi Community Schools 1 & 2.

A total of nine schools in Arochukwu were recipients of the School Back Packs. At each of the venues, the visibly happy recipients thanked God for using the Abia, USA group to come to their assistance. They expressed gratitude to the association and promised strongly that the gesture and items shall encourage the pupils to make greater effort at school. Dr Mrs. Nwosu told Aro News correspondent that her association is made up of men and women of goodwill who care about the less privileged thus, are determined to see that the fortune of some of them is improved for better. According to her, because they have seen that better educational support could have transformational impact in the lives of people, as attested to by the realities in their host communities overseas, they are determined to touch lives back home as much as possible for greater posterity. The project would be a periodic one and many more school children are going to benefit in subsequent events.