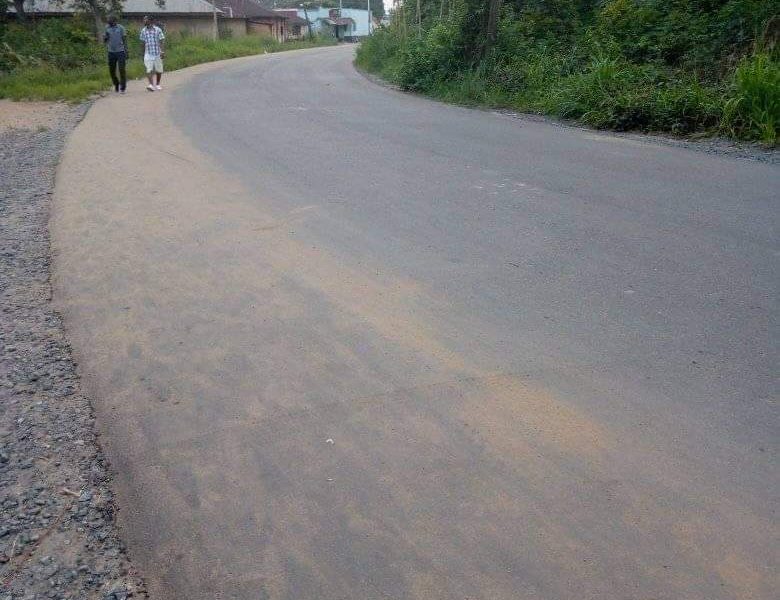 There seems to be hope in the horizon for commuters, motorists and indeed all Umu Aro as appreciable work has been done on almost all the roads leading into and out of the ancient kingdom of Arochukwu.

After the disappointing performance of Beks Kimse Nigeria Ltd in its six years on the Arochukwu-Ohafia road, and doing less than five kilometers of the 32 kilometers stretch, things seem to be looking up now for the communities impacted directly by the deplorable road.

Recent findings by Aro News revealed that construction work has picked up on several roads leading to Arochukwu.

The Federal government had in 2012 awarded contract to Beks Kimse Ltd for the rehabilitation of the road at the cost of N2.2 billion.

In the 2017 appropriation bill, the senator representing Abia North at the National Assembly, Senator Mao Ohuabunwa with the assistance of his colleagues, changed the project name from Arochukwu-Ohafia road to Bende- Ohafia-Arochukwu road and had it sectionalized into two – section 1 and section 2 – for easier construction. The above information is contained in the interview the senator granted Aro News, which was published in the Ikeji 2017 edition.

In 2018, the Minister for Information, Alhaji Lai Mohammed published a list of 69 road and bridge projects in the South East geopolitical zone of the country, apparently to dispel the allegations of marginalization of the zone by the Muhammadu Buhari administration. Contained in the list is the award of the contract for Bende-Ohafia- Arochukwu road to Messrs Hartland Nigeria Limited.

Aro News was unable to confirm if the Federal government has revoked the contract awarded Beks Kimse Limited for the road.

But since the mobilization to site by Harland Nigeria Ltd (an affiliate of Setraco Nig Ltd) in September 2018, construction work has progressed at a steady pace. To underscore its seriousness, the firm commenced work from Ebem Ohafia/Old Soldier junction towards Ihechiowa and set up a camp site near Isiugwu/Akanu Ohafia near the Army check point.

At the last check, more than3 kilometers of asphalt road has been done from the Ebem junction end, heading towards the Army checkpoint. The firm has also started work at Umuchiakuma, Ihechiocha end beginning from Umunnabuo Secondary School towards Arochukwu. Construction of drainages, ring and box culverts etc are being done in earnest, to demonstrate its readiness to complete the project on schedule.

Some construction workers who spoke with Aro News on condition of anonymity expressed confidence that going by the present pace of work, the road might be fully done by year’s end. They, however, complained that their major challenge is pilfering by some youths of the host community. The youths, according to the workers, are in the habit of stealing from the firm and its staff.  The development, they lamented, causes work delay, arising from low morale.

On funding, the workers said the company does not owe them their wages.

“We are being paid regularly since September (2018) when we started work on the site,” one of the workers told Aro News.

And because the workers are not being owed by their employers, work has progressed unhindered on the site.

In another development, work has reached an advanced stage on the Nkana bridge, another entry route to Arochukwu through the Akwa Ibom State axis.

Aro News observed that work is nearing completion on the 102 meters bridge being executed by Peculiar Ultimate Concerns Ltd. The 14.1 kilometers Odoro-Ikpe-Ikpe Ikot-Nkon-Obotme-Arochukwu road has reached over 70 per cent completion.

The road, which is being funded through the Alternative Projects Funding Approach (APFA), is expected to be completed and unveiled by the governor of Akwa Ibom State, Mr. Udom Emmanuel, before the end of the year.

Similarly, construction work has picked up on the Mbakatai-Mpeti-Okoita-Itu-Arochukwu road. The 15 kilometers road is being done by the Ministry of Niger Delta Affairs. The contract was also awarded in 2012 for the sum of N3.6 billion. Aro News observed that grading and drainage construction work has gone beyond the Abia State College of Education (Technical), Arochukwu, and approaching the Nkwunabo junction.

The construction of Arochukwu internal roads as attracted by Dr. Alex Otti, and being executed by the Niger Delta Development Commission (NDDC) is another relief to Umu Aro. The first phase of the project which covered the rehabilitation of Amaikpe-Avia Ovuru road, Amangwu, Ibom and Oror-Amoba roads was done by Solberg Construction Company Ltd. It is expected that the second phase will commence soon.

Also, the Ugwuavor road attracted by Senator Mao Ohuabunwa has equally eased the challenges faced by motorists and commuters plying that route.

The only road that leads into and out of Arochukwu that is not receiving much attention at the moment is the Ndi-Okereke Abam-Arochukwu, aka Okobo road. The road work, a project of the Abia State government, is without doubt causing motorists sleepless nights. After the construction and commissioning of the bridge by the state government sometime ago, not much work has been done on the road.

The result is that motorists are unable to use the road during the rainy season.