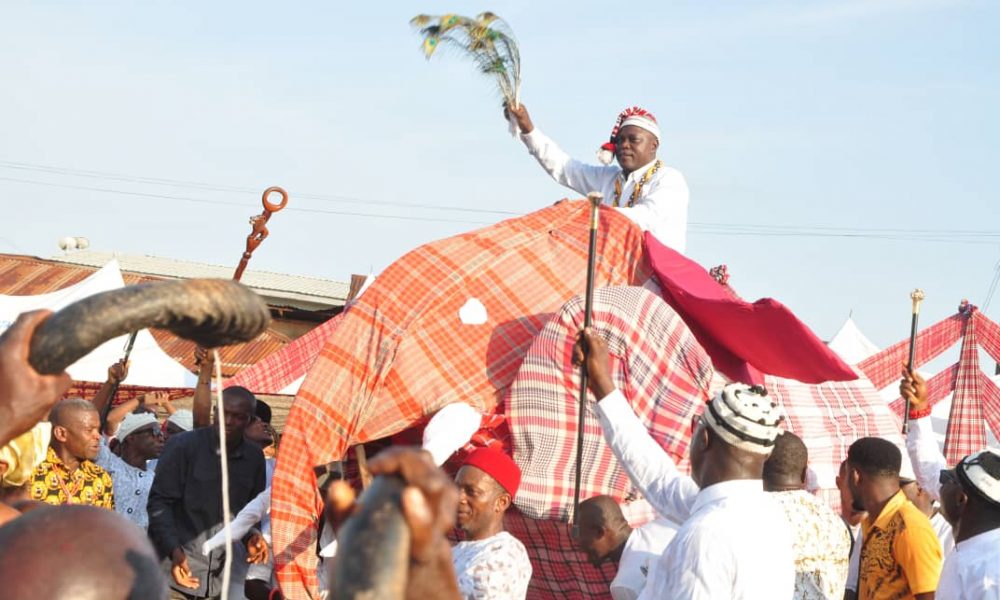 It was jubilation and excitement for Umu Aro at home and in the Diaspora on the 22nd of September 2019 as they celebrated Ikeji Arochukwu festival with friends, neighbors and well-wishers.

Umu Aro from all walks of life stormed the venue, Amaikpe Square, in great numbers to participate in the grand finale of Ikeji Arochukwu 2019, Eke Ekpe, and to welcome the traditional New Year.

Thousands of people trooped into the arena to watch various villages in Aro and Aros in the Diaspora display cultural dances, masquerades, drama etc. and to meet and greet.

Before the event began, people were left in absolute suspense as no one knew what the other village would present, therefore the expectation of teeming spectators, observers and judges was high.

As early as 6:00am, people could be seen running up and down to make sure that the venue wore a new and beautiful look before the arrival of guests, and in a little time, the whole scene had become a glamorous one.

One important fact worthy of note is that the arrangement of canopies this year was quite different and orderly.

According to Mazi Chika Ogbonnaya, who came all the way from Lagos: “I must salute the committee for this wonderful arrangement, if you noticed, there was a lot of space for people to view what was happening in the arena, so I am happy.”

In previous years, there was nothing like that for spectators, Ndi Eze and special guests to view performances because of crowd surge of crowd into the main arena. However, that wasn’t the case this year as the Ikeji Aro Organizing Committee thought out measures to prevent the usual crowd overflow.

The Chair, 2019 Ikeji Organizing Committee, Dr Azubike Okoro explained it thus: “First, we introduced a raised platform where dignitaries could sit and view the arena. We tried it last year, it didn’t work perfectly because the weight on the stage was too much. So this year we introduced a second iron stage, one for Ndi Eze, Nzuko Aro excos members and patrons, and special guests of honour, while the other was for distinguished Umu Aro – Ugwu Aro, Ikemba Aro, Ada Ukwu Aro, and other dignitaries plus the judges and it worked perfectly.

We also introduced TV screens to help minimize the surge as people watched the show live at different locations. Again, last year we had about 25 canopies which were not enough to accommodate people, but this year we increased it to 30.”

The ceremony started formally at about 2pm with the royal entry of the Eze Aro, Eze Ibom Isii, Eze Ezeagwu accompanied by Ndi Eze Ogo and Nzuko Aro exco members. They were led into the arena by the troupe from AroIzuogu. The traditional presentation of kola nuts was observed immediately as the President-General, Nzuko Aro, Mazi George Okoronkwo Ezuma, assisted by the Chair, Nzuko Aro patrons, Professor Okoro Ijoma coordinated the ceremony. After the breaking of kola nuts, Eze Aro representative and the Arianzu, Mazi Oji Kanu Oji in the company of Eze Ibom Isii and Eze Ezeagwu performed the traditional prayers and pouring of libation.

In his prayers, Arianzu prayed for continuous growth, peace and development of Aro Kingdom asking Obasi di n’elu to prosper and unite Umu Aro at home and in the Diaspora. Mazi (Elder) Isaac Okwara Onoh, Eze OgoAgbagwu also prayed for God’s favour and prosperity upon the land.

In his opening remarks, Mazi George Ezuma expressed gratitude to God for making Umu Aro see another Ikeji and yet another Eke Ekpe. He hailed the efforts of the Organizing Committee for working tirelessly in making sure that this year’s event was better than last year’s. He urged villages to be at their best performance in order to lift the trophy. He used the opportunity to thank UmuAro for electing him and his team for a second term and pledged to continue the good work they have started.

Similarly, the Chairman of the occasion, Sir Chikwe Udensi (Ugwu Aro) remarked that Aro has witnessed a high level of development in the last few years because of the unity and peace that Aros enjoy. As the theme goes “Culture for development”, he urged UmuAro from all works of life to come together to rebuild Aro. In his separate speech, Senator Mao Ohuabunwa congratulated Umu Aro on the auspicious event of Ikeji Aro. He said that as an Aro man, he has always been bothered about Aro affairs and has always answered when called upon, he promised to continue supporting Aro Kingdom to the best of his ability noting that even after the election he was still carrying out projects. Sen. Mao encouraged his supporters to keep hope alive and invited them to witness another rural electrification project in which he donated a transformer to Obinkita village, Arochukwu. He also donated cash prizes to villages that emerged winners of the competition. Some of the highlights of the event were the traditional “Iwajiovuru” (cutting of the new yam) by Ndi Eze and prominent Umu Aro plus cultural parades by villages. Agbagwu village, Amangwu with their Odu Mgbede cultural troupe, Amankwu came with 3 masquerades from Aro NdiIzuogu, Amannagwu stormed the arena with their Amarigwe war dance, Amasu, Amoba, Atani came in a different and unique way with a big artistic Enyi (elephant) which is the symbol of their village. People were more stunned when their President-General Mazi Chekwas Oti pulled out his head from the open roofed elephant and waved to the cheering crowd. Other villages were Obinkita, Ugbo, Amukwa, Asaga stole the show when they arrived the arena with a crafted tiger and a scintillating performance by the Emmanuel theatre Academy, Ugwuakuma came with Kokoma, Ibom, Ujari came with Ekpo masquerades, Amuvi and Ugwuavo stormed the arena with a seasonal masquerade called InyiAgbaoku and Atuejeogu. Isimkpu, Oror and Utughugwu were merely represented.

The judges were Engr. GoddyOkoronkwo, MaziOgbonnayaOkerekeAkumah and Comr. Obasi Praise Genesis and they performed the task without fear or favour. The following villages emerged top 5:Asaga 1st, Atani2nd, Amoba3rd, Amangwu4th and Ibom 5th. As villages received their cups and cash prizes they were advised to do better next year. Asaga village has remained on the number one spot for three consecutive times. The youths took over the arena few moments later with the Arochukwu Got Talent and Face of IkejiAro (Mgbede Aro contest) 2019. In a fun and party mood hundreds of youths gathered to watch the show and witness the crowning of the first MgbedeAroOkeigbo. Dance, comedy, music, rap and drama competition was highlights of the night show as young people took the opportunity to show their talents. Five beautiful maidens participated in the contest for Face of IkejiAro: OsonduIfeoma (Atani), NtaChinyere (Obinkita), Ukwu Martha (Agbagwu), Faith Sunday (Ibom) and Blessing Ifeanyichukwu (Obinkita). The contestants all dressed in typical and traditional NwaMgbede attire appeared on stage to educate the audience on the names of each item they are wearing and their significance. They were asked some questions on Aroaffairs and they spoke in Aro dialect. After their display, the judges; Queen Faith Chinagorom Nkah (Most Beautiful Girl in Arochukwu 2018) and Adamazi Judith Igwe announced the results. Ifeoma Osondu from Atani emerged winner and was crowned FACE OF IKEJI ARO (MGBEDE ARO 2019), Blessing Ifeanyichukwu came 2nd and was crowned ADA ARO OKEIGBO, ChinyereNta came 3rd and was crowned ADAMAZI ARO.

Mazi George Ezuma reiterated his commitment to making sure Aro youths are carried along in his administration and are given a special attention. He said the youths show was geared at bringing the young ones together in a fun atmosphere. He advised them to be their brother’s keeper and shun violence capable of ruining their future. In his remarks, one of the sponsors of the youths show, Mazi J.C Imuoh also enjoined young people to be of good behavior and be humble if they must attain greater heights in life. He appreciated the efforts of National Association of Arochukwu Students (NAAS WORLDWIDE) led by Comrade Obasi Praise Genesis for packaging the show to this standard saying that this kind of show could only be seen in big cities like Lagos, Abuja and Port-Harcourt. AROCHUKWU GOT TALENT and FACE OF IKEJI ARO was founded by Ikeji Aro Organizing Committee 2019 in collaboration with the NATIONAL ASSOCIATION OF AROCHUKWU STUDENTS (NAAS). There was palpable tension in Arochukwu on July 16, 2019, as some vengeful Obinkita youths went after suspected killers of a young man called Okereke. ...