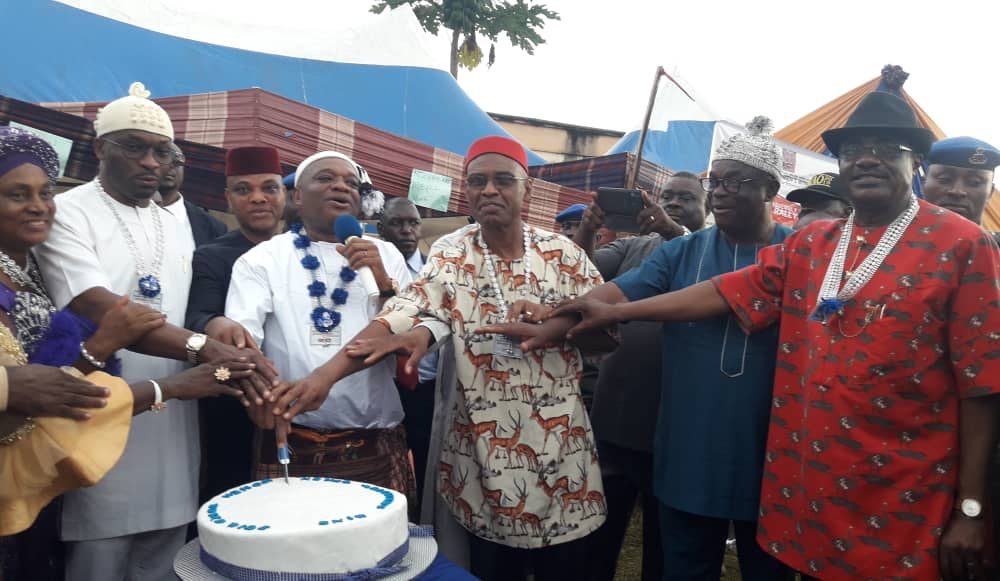 Like every other annual festival or ceremony that comes with great expectations and positive anxiety, the women’s wing of Nzuko Aro (world-wide) prepared, and waited with positive anxiety for these special three days in the month of October to come. As we know, the annual Mass Return of Aro women have come to be. It is a community development programme that brings Aro women both at home and the Diaspora together to socialize, while contributing their own quota to community development.

It has remained a very colourful event that keeps improving by year. While some people have nick-named it “Christmas ndi Inyom” because women adorn themselves in new attires during this period, and come home en masse. Others call it “Ikeji ndi Inyom”. All these depict the pump and glamour that are associated with it.

The year 2019 event was not different, but rather raised the stake higher. As in the women’s tradition, Wednesday 16th of October saw the women coming into Aro.  In fact, Aro began to wear  a new look. Thursday witnessed a huge turnout of women coming in from different branches. Thursday hosted the CEC and NEC meetings. Friday morning ushered in the General Assembly, which was held at the Civic Centre.

The Friday outing, as usual, was very colourful and entertaining.  The women were all dressed in Omu Aro, with white blouses sewed to fit. There were branch thanksgivings, as well as villages. The day also featured competitions on Welcome Songs and Nkui. Gifts to the aged, which has remained an integral part of Mass Return events, was also observed. The aged were fed, and given new wrappers each. They were also given food stuffs to go home with. On Saturday, which was the round off, branches really proved the people that nick-named it Christmas ndi Inyom right. All the branches came forth in beautiful new uniforms.

The line up for the day were:  Welcome Song, Oso Mmiri, match past, and  fashion parade. In all these activities, Inyom Aro demonstrated dexterity. The star event for the day was the giving of awards to deserving Aro sons, daughters, and friends.

Though there was a down pour at the commencement of the event, it did not by any means deter the women from doing what they know how to do best. The rain had no option, but to stop when it saw that the women were enjoying every drop the sky was releasing. It was indeed a shower of blessing.

As is traditional for Inyom Aro, they also hosted dignitaries from far and within. Chief amongst them were the Senator representing Abia, Senator Orji Uzo Kalu, and Senator MAO Ohuabunwa.  The Chairman of the day was Mazi Leo Asonta, who did justice to the assignment given to him.

The women went for thanksgiving at the Winners Chapel on Sunday, to appreciate God for His numerous mercies, and blessings. After the service, they retired to the Civic Centre to conduct election for the Central executives, having completed their term. In the course of the election, a motion was moved to return all the executives for a second term. The motion was carried, and all the executives were returned unopposed.

They also visited the Prison about a week after the Mass Return, with food stuffs and toiletries. They also fed the inmates with spiritual and physical food.

To crown it all, all the branches that came home for the Mass Return went back to the branches safe, and sound. It can only be God.