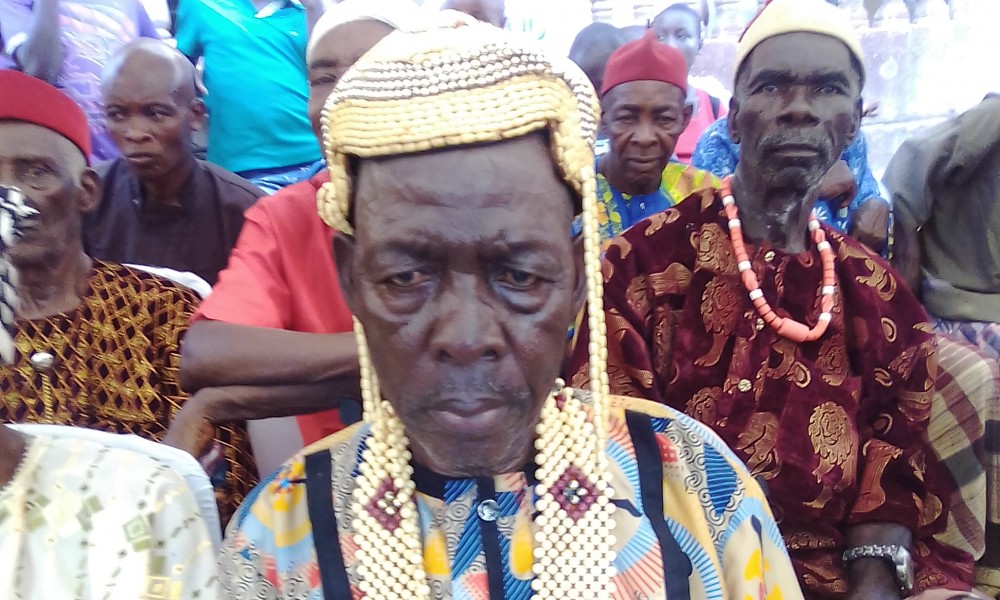 There was wild jubilation in Ugwuakuma village on Saturday November 23, 2019 following the return of peace to the community after a long period of protracted disputes.

The jubilation was as a result of the end of a misunderstanding between the Eze Ogo, Mazi Onoh Nwa Onoh, and some members of his cabinet representing various compounds in the village.

The dispute started following an alleged interference of the Eze Ogo’s family members in the discussions of the cabinet members during meetings held in his house.

A group of the cabinet members led by Mazi Okoronkwo Okoro, had complained about the attitude of the Eze Ogo’s family members and requested that a new venue be selected for their meetings.

The above scenario gave rise to what seemed like two factional groups handling the affairs of the village.

During the period under review, a lot of accusations and counter accusations came from each of the groups against the other.

The disputes affected every aspect of cultural, social and religious life in the community.

But poised to ensure that the quest for peace and development were maintained in the community, the Ugwuakuma Development Union, led by Mazi Eugene Okechukwu Imuoh, moved in to resolve the misunderstanding between the Eze Ogo and his cabinet.

Many peace meetings that were called by the UDU to resolve the issues did not yield any results following a lot of grandstanding by the parties involved.

But as development cannot be achieved in the absence of peace, the UDU continued in its stand that peace must reign in the village and the Eze Ogo’s cabinet must be one and united using many strategies to achieve this aim.

In the month of September 2019 the UDU held yet another meeting having invited the two groups involved in the dispute.

But the union was shocked at the response of the Eze Ogo’s group via a reply to the letter inviting them to the meeting.

The Eze Ogo’s group in their response letter questioned the indigenship of the UDU leadership by fixing a meeting on the day the Ibom Isii kindred were marking the Nkwo Ekpe  day celebration.

Although all Umu Ugwuakuma present during the meeting did not find the response from the Eze Ogo funny, but a unanimous decision was taken that another meeting would be fixed which would serve as the final move to bring peace to the village.

It was agreed that another invitation would be sent to the Eze Ogo’s group and the group led by Mazi Okoronkwo Okoro.

The meeting finally held as planned. It yielded a lot of positive results following various efforts by the UDU leaders to ensure that the splitter groups becomes one again.

The two groups had united as one again, peace has returned to Ugwuakuma, now Unity, love and progress will be inevitable in the Community.

The President General of the UDU Mazi Eugene Okechukwu Imuoh, has confirmed the return of peace in Ugwuakuma to Aro News.

His words: “The good news is everywhere .Tell it to the mountains. The long awaited peace is finally here .

UDU has done it again!

“I assured Umu Ugwuakuma in our September meeting that the November 23rd peace talk will be the last in the series and so it is today .

“The Eze Ogo ‘s cabinet is now one with Chief Okoronkwo Okoro as the spokesman and Chief Augustine Nwoso as cabinet secretary.

“Eze Ogo Mazi Onoh Nwa Onoh led the Ezes in Council to the traditional marriage of Chidinmma, the daughter of our late VPG east, Mazi Ogbonnaya Chukwu on Saturday November 23 in Ugwuakuma.  It is one victory dedicated to God first and all members of UDU.

“I thank all UDU  members and branches for their doggedness to fight on till peace was achieved. I will also not forget those who worked and achieved this milestone in the history of Ugwuakuma village.

“I must for recognition sake mention my ever loyal NEC officers, my never say tired DPG, the village historian who answered all my calls to plan this peace movement. The ever bold, fearless and perhaps the most outstanding Ugwuakuma son ever lived.

“Also to be remembered is my Secretariat for their ever presence at all peace meetings.

“Above all, our gratitude goes to both parties in dispute for sheathing their sword to allow peace have a permanent seat. In particular we want to salute the courage of Chief Okoronkwo Okoro led group for making the peace process easier this time around.

“God truly manifested His presence and kept all obstacles in check for peace to reign .we return all the glory to God. Those I cannot mention here are not forgotten at all.

“We acknowledge your efforts and all the risk you took and pray God to reward all of you abubdantly.UDU will have a special thanksgiving in December after Ugwuakuma Day to celebrate the return of peace to the village. To God be the glory