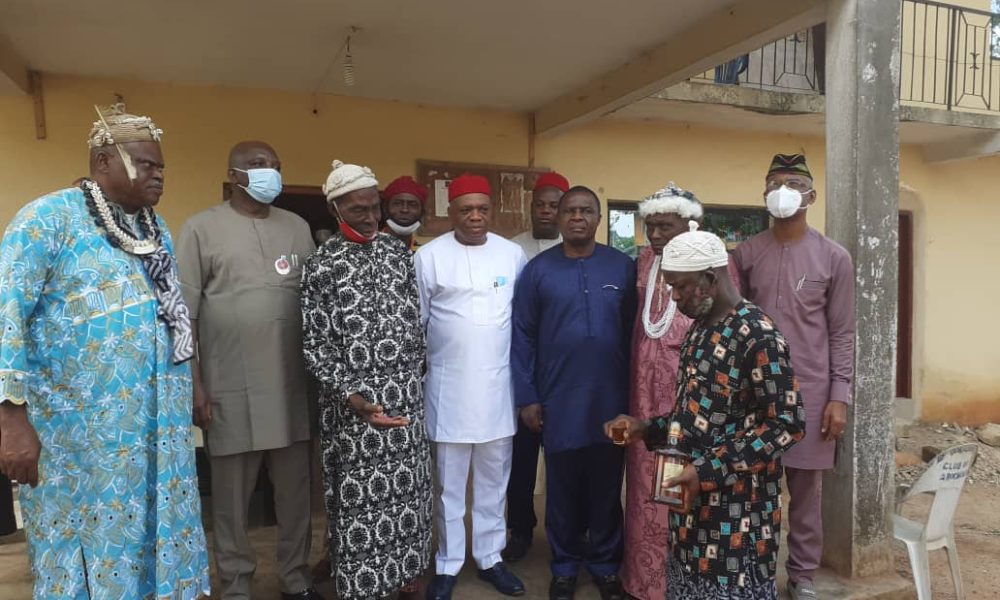 The Minister of Power, Engr. Mamman Kwagyang Saleh, has assured that the three major power projects located in Abia North Senatorial District of Abia State, which have been abandoned for years, would be reactivated and completed in the first quarter of next year.

Speaking during his working visit to the 2×30/40MVA substations 132 KVA transmission lines, which are located in Arochukwu, Ohafia and Ihechiowa towns in Abia North Senatorial District of Abia State, the minister expressed dismay that the projects awarded since 2010 were abandoned at about 90 per cent completion stage.

He said the Buhari administration is ready to complete all abandoned projects in the power sector across the country in fulfillment of the president’s promise to Nigerians.

The minister assured that contracts for the three abandoned projects would be reviewed and re-awarded for immediate completion.

He noted that “the power projects are of immense importance to the people because they would not only boost their electricity supply but also give room for expansion to cover the entire Abia North Senatorial district.”

“To this end, the Federal government has mapped out millions of different households across the nation for their power needs, distribution and monitoring, and for which we recently launched the Central Data Management System, the first of its kind in the history of Nigeria.

“The Central Data Management System (CDMS) is a digital platform of the Nigeria Sustainable Energy for All (SE4ALL) that monitors power networks across the country. This initiative is part of our efforts to digitize the Nigerian power sector using innovative digital technologies and processes that will help address many of the key challenges that our power sector is facing today,” the minister added.

While maintaining that it is “very remarkable to note that within just one year of starting the Central Data Management System project, the primary data has been gathered, classified and stored on the Nigeria SE4All web portal,”

Engr. Sale told the cheering crowds in all the three locations visited, that he would be happy to return to the sites next year to commission the projects.

The visit was in response to Senator Kalu’s earlier request in a letter dated  October 20 to the Power Ministry for the revitalization of six uncompleted power transmission stations sited in Arochukwu, Umuahia, Ohafia and Isuikwuato LGAs of the zone.

Others in the delegation were the Permanent Secretary Ministry of Power; Chinyeaka Christian Ohaa; Managing Director of the Transmission Company of Nigeria; Engr Sule Ahmed; and the Director of Transmission, Nosike Emmanuel; Members for the Abia State House of Assembly and the Deputy Chief Whip of the House of Representatives, Hon. Nkeiruka Onyejeocha, as well as several other directors and engineers from the ministry.

The first point of call by the delegation was the palace of the His Majesty, Eze Aro, where they were received by Eze Aro representative, Mazi Oji Kanu Oji; Mazi Kanu Okereke Kanu (Eze Ibom Isii) and Mazi Okorafor Uroh (Eze Ezeagwu), after which the team proceeded to the power project site.

Speaking at the site, Senator Kalu lamented the non-completion of the projects which he facilitated in 1999 during his administration as Governor of Abia State.

Kalu reiterated the commitment of President Buhari’s administration to better the lot of Nigerians, while also giving assurances that the projects will be completed. He outlined the economic benefits of the power projects to the community and other parts of the country when completed.

His words: “Few months ago I wrote to the Honourable Minister to see how his ministry can reactivate the power plants because these are parts of the reasons we were elected. President Buhari is committed in reactivating all abandoned projects, we are constructing the roads and we also believe that power should not be left behind. The people will function better economically when they have both roads and power infrastructure put in place. The government of the All Progressives Congress is committed; you can see the construction of roads all over this local government; it shows that the APC government is responsive.

“I can assure you that in no distant time works to complete these abandoned power projects will commence that is why the minister came with a powerful delegation from Abuja with the Managing Director of the Transmission Company of Nigeria, Permanent Secretary of the Ministry of Power and other directors and Engineers in the power sector.”

Kalu said: “I am particularly worried because this project was initiated when I was governor in 1999 , I facilitated these power plants when I was governor but till date it has not been completed. But I am assuring you that President Buhari is committed to ensuring that these projects are completed.

“This power station is of economic importance to this zone and the entire Southeast zone because once you generate electricity even people in Cross River will benefit from it. The project will bring about economic development, and that’s why you can see the Deputy Chief Whip (of the House of Reps) here and several other members of the House of Representatives joining us to ensure that this project is done.”

He said: “The major problem experienced with this station is that, the line that ought to energize this station is not completed and that line is Umuahia-Ohafia-Arochukwu. So that’s the most important issue in this project.

“The prices submitted for this project in 2001 cannot complete this project now because prices have changed. All the equipments are here; procurements almost 95 percent… This substation goes all the way to Okigwe; it’s a very strategic substation,” he concluded.

Mazi John Okoro bows out at 93

The death has occurred of Mazi John Akaego Okoro of Isimkpu village, Arochukwu at the ripe age of 93 years. He was born on 26th ...