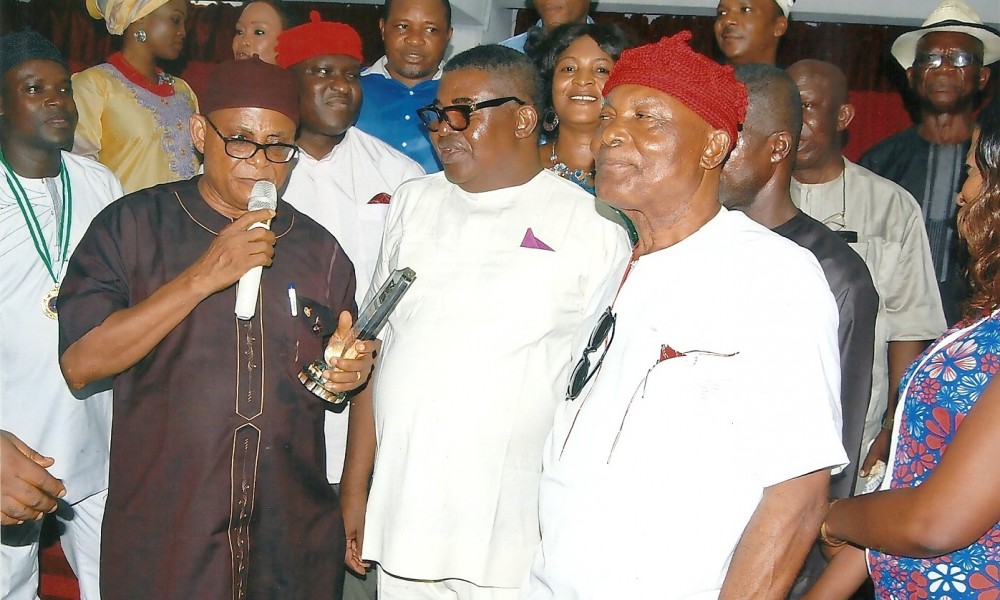 Sunday the 29th of November, 2015 witnessed the gathering of umu Aro from all walks of life domicile in Lagos. They converged on ‘Ezumezu Aro’ in the centre of excellence, Neniv Conference and Events Centre located at Mafoluku, Oshodi along the busy international airport road to take stock for the year 2015 and thank God for his mercies.

It was the first outing for the newly elected executive of the union led by Mazi Sam Ejike Onwuchekwa. Recall that they came on board in April to replace the Mazi Jideofor Kanu team. To ensure a hitch free end of year get together, a committee headed by Chijioke Ogbonnaya with Ugo Okoro as scribe was put in place to ensure a good outing. The committee sat severally and planned what eventually turned out to be one of the best outings of the branch.

On the day, the branch investitured six patrons and seven patronesses, chaired by Mazi Emma Okereke, Chairman/Chief Executive of Mannix Ville Hotels, the event took off at about 4pm with the rendition of Aro national anthem anchored by Mazi Naira Okorafor after the opening prayer by one its patrons Mazi Emma Kanu Ivi.

The chairman of the day, Mazi Emma Okereke had the honour of handing out the award plaques to the honourees with assistance from Mazi Ernie Onwumere and Ugo Okoro.

The traditional picking of kolanuts by individuals and villages added pep to an already exciting evening as villages tried to outshine one another with Obinkita eventually emerging the winner.

Hon. Uko Nkole, member representing Arochukwu/Ohafia federal constituency in the House of Representatives also graced the event. The branch president, Mazi Ejike Onwuchekwa had the honour of handing out two awards, first to Arc. Chima Chijioke, proprietor of the venue who over the years, reserves the hall for Nzuko Aro every last Sunday in November for its end of year activities free and Mazi Emma Kanu Ivi, Chairman, Aro News Publications Ltd who has always being of great assistance and support to the branch. The duo was honoured in appreciation of their diligent services and sacrifices to Nzuko Arochukwu Lagos branch.

As the race for who succeeds Mazi Nnamdi Udoh as president general of Nzuko Aro hots up, the 1st Vice President General of the union Barr. Steve Amaramiro stormed Lagos with his campaign. He described himself as the best candidate for the job.

The women almost stole the show with the late hour cutting of cake coordinated by its president Mrs. Gift Onwuchekwa.Dance, dance, dance took over the venue till late in the night with the DJ dishing out melodious old school tunes to the delight of many who took to the dance floor.

The coal city of Enugu played host to Umu Aro from diverse backgrounds and different branches as the third Central Executive Committee (CEC) meeting in ...