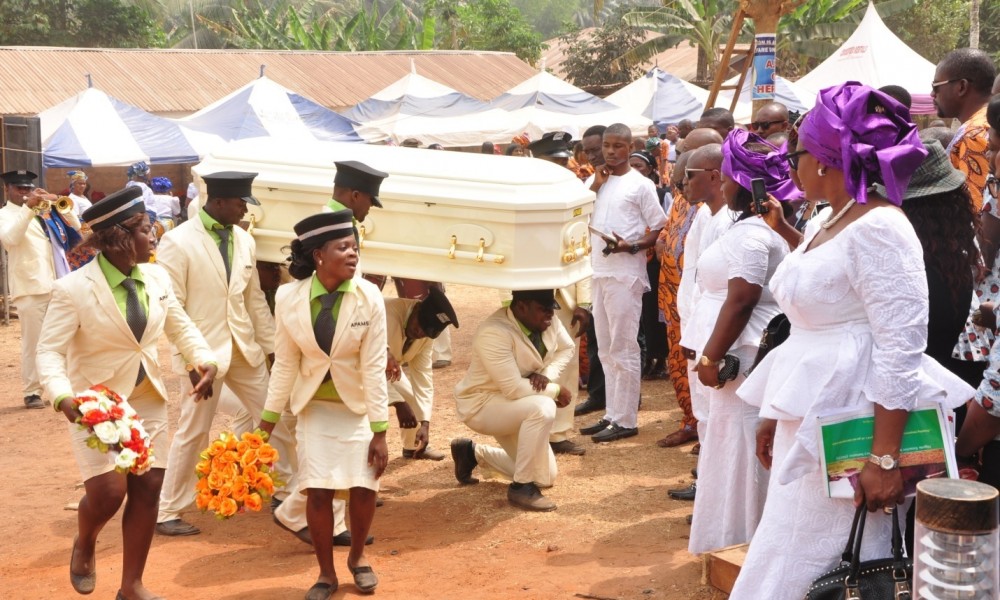 Obinikpa village, Ajalli, Orumba North Local Government Area, Anambra State, the abode of Umu Okoronkwo-Emuwa family turned into Mecca of sorts on Thursday and Friday, January 28 and 29, 2016 when it played host to a crowd of mourners that witnessed the final burial rites of Mrs. Grace Agaezichukwu Arukwe. She was a scion of the famous late Mazi Lazarus Ogbonnaya Okereke family of Ndi Okoro-Avigbo, Amuvi, Arochukwu; a wealthy produce merchant who franchised for J.B Ollivant, UAC and John Holt before the civil war. Her only daughter, Mrs. Stella Chika Arukwe is married to an erudite Aro son, the founder/pioneer publisher of Aro News Newspapers. The late Agaezi or Elemma, as she was popularly known, got married early in her life to late Mazi John Okwudili Arukwe of Obinikpa Village, Ajalli.

A statement by the eldest son, Barrister Chris Arukwe indicated that she died after a brief illness at the age of 71 years. There was service of songs at her Enugu residence, 11 Udoji Street, Ogui New Lay Out, all-night wake at the Arukwe-Okoronkwo-Emuwa family, Obinikpa village, as well as, burial mass at St Mathew’s Catholic Church, Ajalli before she was buried.

Her USA-based only surviving brother, Mazi Nnanna Okereke (Topsy) and other relations, including Mrs. Nnenna Echebiri organized a service of songs for her on Friday December 4, 2015 at Randolph, Massachusetts while her son in-law, Mazi (Dr) AzubikeOkoro hosted a special production on her “life & times” on a dedicated page to immortalize her. Her marriage was blessed with four children (Christo, Stella, Chibu, Chuma) and all through her life she relied strongly on God.

At 71 years of age, Elemma stood firm, erect and became better like wine mellowed in ancient oak, indeed, like an Amazon she shined like a diamond of million facets until death. Mourners from various walks of life swarmed the entire environment in multiple colors akin to a carnival, including entertainers and music makers that provided rich side attractions in the midst of sumptuous meals and choice drinks that flowed endlessly as she departed to eternity in a blaze of grandeur.

There is this anecdote in Igboland about the grasshopper and the bird called “Okpoko”, a mysterious bird reputed for its queer ways. Okpoko is a ...