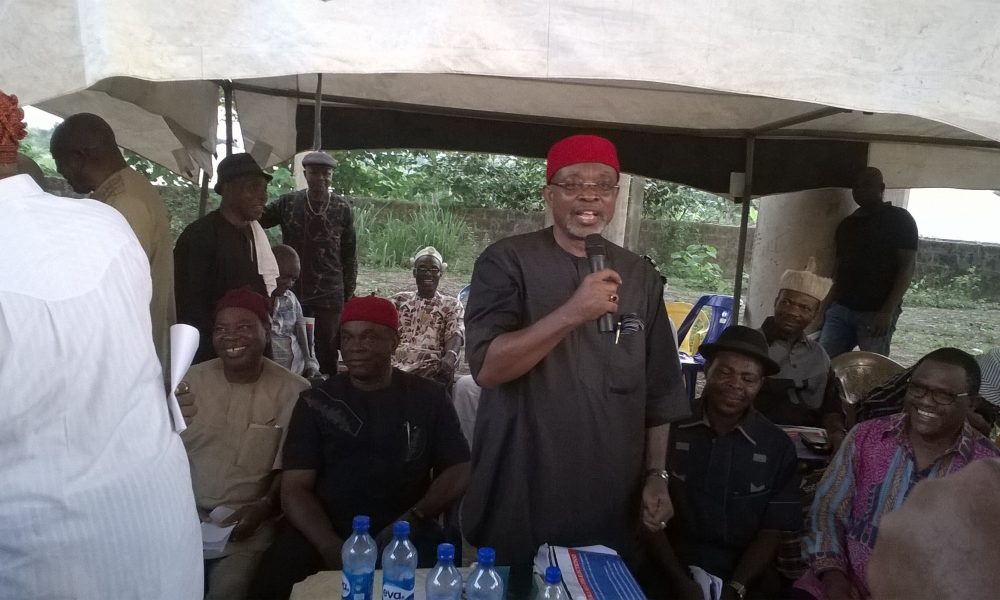 According to Engr Nnamdi Udoh (until 26 March, 2016 the president-general of Nzuko Arochukwu), the election conducted on 26 March, 2016 was the highest-attended one in the history of Nzuko Arochukwu of the ancient town of Arochukwu. He said he was happy at the development. Before the election started, he had reeled out what he and his cabinet had ‘achieved in the last six years’, and the greatest of them, according to him, was making peace among the three traditional rulers of the kingdom, and ensuring further that peace reigned in the town of Arochukwu generally.

In all, virtually every branch of Nzuko Arochukwu (even those not known to many other Aro men hitherto) was in attendance with the ‘correct’ number of delegates allotted such branches. Ditto the villages. Every village in Arochukwu had delegates – allotted according to the perceived numerical strength of such villages. The largest villages had up to seven while the smallest had two. Others, such as Isimkpu, had three. The significant thing was that every village was in attendance, and almost every branch of Nzuko Arochukwu. It was, indeed, a spectacular day to behold; and the election organisers did their best to ensure it was rig-free before, during and after the election.

That high level of organisation and preparedness made one of delegates sitting beside me to nod in agreement that ‘Aro has arrived!’ Really, the like of Mazi Sam Ohuabunwa (who handled affairs during the election proper); Mazi Ukwu Udonsi (who had graciously attended the occasion despite his age and other commitments); Mazi Ogbonnaya Udoagwu (a lover of Arochukwu), and Dave Imoko, among so many other dignitaries at the occasion, made the occasion grand. What of the ‘bekee Aro,’ Mazi Emmanuel Ivi? They all must be commended for their enviable roles in ensuring that the ancient town of Arochukwu conducted a most credible and fair election ever.

True to Engr Udoh, nearly all those gathered at Oror had come to participate in the election in one way or the other. So, the election began: the already submitted delegates’ names were called out from one village after another; one branch after another – and one Aro club after another, an innovation, somebody had noted, was first introduced during the last year’s election, a novel idea that was well taken by the people. As delegates were called out and given their seats, voting would soon start; and it, indeed, started. But one man refused to vote and asked to be excused. Guess who! The out-going president-general – Nnamdi Udoh! His reason was, to many political scientists, not surprising; as shall be explained later.

So, voting started. The president-general’s position was to be contested between Barr Steve Amaramiro (of Ujari village) and Mazi George Okoronkwo Ezuma (of Amuvi village). After the voting, Ezuma had beaten Amaramiro by a very high margin, and pronounced elected by Mazi Sam Ohuabunwa; Mr Anicho Okoro, ace journalist and PDP king pin, was elected the secretary-general, ditto Chijioke Okoro (of Ugbo village) who was elected the treasurer. An ace broadcaster, Eugene Okey Imuoh (of Ugwuakuma village) emerged the publicity secretary of Nzuko Arochukwu.

But one remarkable thing was noticeable during the election – the open, show-of-hand voting was unwelcomed by majority of the delegates! During the election, a Lagos branch member had confided in this reporter that ‘Aro Nzuko has overgrown election by hand;’ he had said that show–of-hand elections ‘encourage enmity, hatred, strife, left-over rancour and bitterness; we should amend Nzuko Aro constitution to make her elections to be secret balloting in line with global best practice!’ I quite agree with him as a political scientist and political observer/activist.

After the out-going president-general had declined to vote and asked to be excused, I asked a lawyer beside me why he thought Engr Udoh declined to vote for his successor. The lawyer immediately told me he (Engr Udoh) did not want to offend either of the two contestants; if he voted for Ezuma, Amaramiro would not be happy, and if he did vote for Amaramiro, Ezuma would do the same. Yes, this is true; so his decline to vote was to save his face among the two contestants.

I faced that same dilemma when those who had voted were asked to stand up for counting. I felt uncomfortable at that. The two contestants were all ‘for me;’ Mazi Ezuma hailed from my mother’s village (Amuvi) and had been known to me from the word ‘go,’ while Barr Steve Amaramiro had been a loved Aro man I had been associated with in Umuahia branch of Nzuko Arochukwu for long (when I was a member.) If I stood and signified I had voted for Ezuma, how would Amaramiro see me, and vice versa? I am sure many others were in my shoes that day in that dilemma.

So, it sums up to mean that Nzuko Arochukwu should hasten up to abolish open, show-of-hand voting; we have since grown above it – particularly from the way things went at Oror during the election. Nzuko Aro must review that constitutional provision in this regard as early as possible, so that the election of 2019 will be secret.

Again, where had all the branches of Nzuko Arochukwu that attended and voted during the election been holding their meetings in their various branches all along? The answer, as quipped by a delegate from Aba, is that all branches of Nzuko Aro have been holding their branch meetings in the halls built by other towns’ unions, as what obtains in Umuahia, where Nzuko Arochukwu has been holding her monthly meetings at Arondizuogu Patriotic Union Hall, Awkuzu Lane By Enugu Road, Umuahia, built in the 1960’s. Investigations reveal that but for Abakaliki branch which has a hall built and donated by the late Chief Agwu Nwankwo (of Asaga village) to the Nzuko there, more than 99% of all the branches of Nzuko Aro have no halls of their own, including Abuja, Lagos and Aba whereas many members of these branches own their private buildings in these cities! Yes; we have continued to use other people’s halls shamelessly.

When Aro News spoke to seven delegates after the election, all of them spoke on the need for a change of attitude in that regard: they wanted Nzuko Aro to build halls in their branches and complete the ‘uncompletable’ civic hall in Oror where sun had ‘bitten’ silly many of the delegates on Easter Saturday during the election. A patriarch of Isimkpu origin had asserted that the civic hall project had commenced since 1976 (when the writer was seventeen years old) and has been on-going till today! What a shame!

One of the respondents was even very blunt. ‘All these people you see here have come for their personal interests. Many of them have come to milk Aro. They are not here in the interest of Arochukwu!’ He, therefore, challenged the new executive committee of Nzuko Arochukwu ‘to elect to serve Aro not themselves as usual! Completing the Aro civic hall is what they must do before they leave office.’

The people of Arochukwu, Abam, Ihechiowa, Isu and Ututu, the five clans that make up Arochukwu LGA of Abia state, rose to the occasion recently ...