A brief history of the Civic Centre 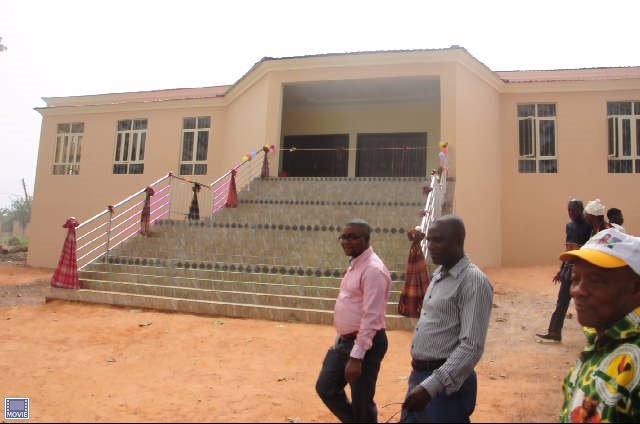 Conceived in August 1975 by Nzuko Aro (then known as Nzuko Ikom na Inyom Aro), the story of Aro Civic/Cultural Centre project had taken a chequered trajectory.

Records have it that the land was acquired from Okoni compound of Ibom village, and later surveyed. On it was started a modest town hall project, which had reached the DPC level before it was demolished to make way for the present structure.

The design was done free of charge by Landmark Architects, an architectural firm owned by Mazi Chima Chijioke (Ugwu Aro) and submitted to Nzuko Aro in December, 1990. Then, Mazi Emmanuel Okorafor Avonta (now late) was the President General of Nzuko Aro.

The foundation laying ceremony was performed in 1991 by a former Deputy Governor of Imo State, Dr. Francis Orji,  (prior to the creation of Abia State), signaling the commencement of construction work.

Sadly, the work stalled, giving way to what were at the time priority projects such as building the Arochukwu Local Government Secretariat, securing the Abia State College of Education Technical, Arochukwu (ASCETA), boundary adjustment issues, and the protracted litigations over the Eze Aro throne.

These issues combined to stall the desired progress on Civic Centre project.

In 1996, Eze Aro, His Majesty Mazi Ogbonnaya Okoro (CFR), inaugurated the Aro 2002 Committee to commemorate 100 years of the Arochukwu/British war. That committee was headed by Engr. Mathias Okoro (now late) with Mazi Sam Ohuabunwa (OFR), as the fund’s manager. The name of the project was thus changed to ‘’Arochukwu Historic and Cultural Centre’’.

During the period, efforts were made to raise money to continue the Civic Centre project. A fresh foundation was commenced during the tenure of Mazi Sam Ohuabunwa as President General of Nzuko Aro. That administration also did the drainage system on the swampy portion of the land, which helped to control the erosion.

During the tenure of Mazi Emma Kanu Ivi as President General of Nzuko Aro, the foundation was completed, followed by some block work.

By 2007, there was a slight modification to the original design, which brought down the estimated cost from N300 million to N133 million. The latter was done by the trio of Engr. Goddy Ijoma, Engr. Chinedu Oti and Arc. Emmanuel Okorafor.

But by and large, as Aro News found out, the project is being constructed following the original design by Arc. Chima Chijioke in 1990.

Mazi Ivi’s administration reclaimed the swampy land in front of the project site for temporary use, and engaged the services of Messrs Julius Imuoh through direct labour arrangement, which culminated in the eventual roofing of a section of the building in 2010.

The administration of Mazi Nnamdi Udoh as President General of Nzuko Aro moved the project further by building some pillars, added cross beams, polines, rafters and bought some roofing sheets.

Given the slow pace of the work on project over the years, not a few feared that it was jinxed. But not Dr. Alex Otti!

While the leadership of Nzuko Aro under Mazi George Ezuma was strategizing the way forward for the Civic Centre, Dr. Alex Otti on December 26, 2016, requested the team to hands off the project, promising to deliver it in12 months hence. He did not reveal his strategy.

Predictably, that announcement was greeted with a deafening applause.

Aro News learnt that Dr Alex Otti later reached out to some Umu Aro, essentially those who share his philanthropic passion, and mobilized funds from them in support of the project.

To those who contributed, he reportedly assured them that not only will their monies be judiciously applied to the job, their donations will also be acknowledged in the form of Roll of Honour.

In a lighter mood, though, Aro News gathered that Dr Otti had in a few instances politely rejected what he considered meager contributions from some persons he believed could do more, asking them to up their game. They gladly did!

In the final analysis, several millions of naira must have gone into executing the project, but Aro News could not immediately piece together the figures.

Nonetheless, 12 months down the road, it is a promise kept; which is why Umu Aro are looking regal today (Dec. 26, 2017), all roads leading to Oror, to witness the epochal event.