The Return of Mass Rally, A Glorious Moment 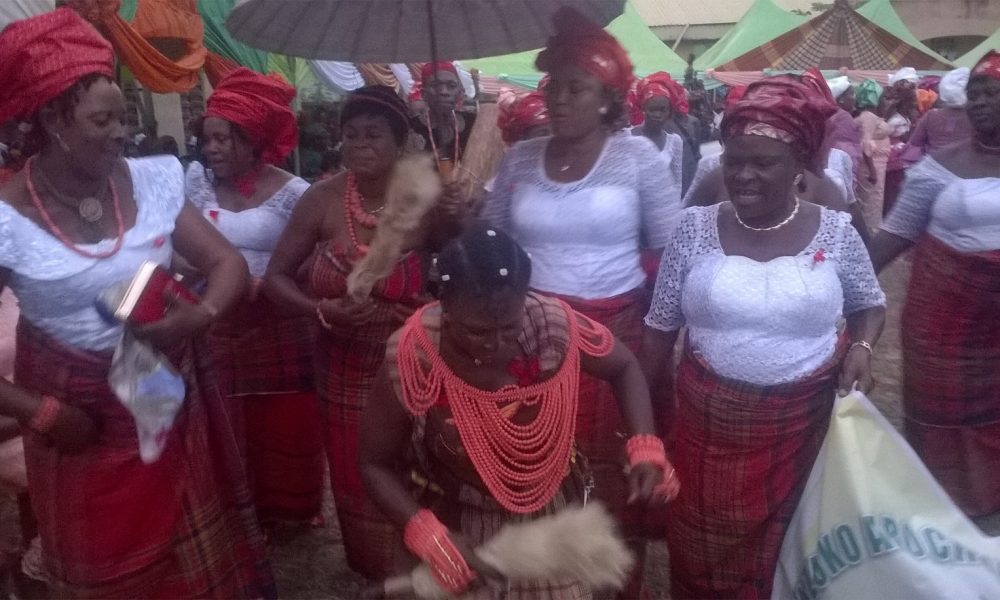 The annual Mass Rally, or Mass Return of the Women’s Wing of Nzuko Aro- Worldwide, was instituted by the late Elder (Nneoha) Maria Achinivu, (aka Mma Maria) the 1st elected President General. It has been a home – coming every Inyom Aro looks forward to. Through this women’s annual event, (aka “Christmas Ndi Inyom” ), Inyom Aro have achieved a lot in terms of developmental projects over the years.

However, as we know, the devil has always shown interest in success oriented projects, so he did not spear the women’s Mass Rally through the leadership tussle that ravaged the women’s wing for about three years now. Within that period, Mass Rally went on break. Also, like every other ephemeral challenges that has a beginning and end, it also took its leave, as peace returned to the women’s wing, after a successful election and inauguration of the Central Executives on Aro Day, 26th December, 2016. Thus the return of the women’s Mass Rally came with a loud baaaang!

After the inauguration, it became clear that the stage was set for 2017 Mass Rally; which theme was- “Peace, The Panacea For Community Development”. Branches began to prepare, waiting for the D-day to. As expected, by the grace of God, the day came. It was the Silver Jubilee Anniversary of the women’s Mass Rally. From Wednesday, the 19th of October, 2016, Aro Kingdom wore a festive look. The inflow of human and vehicular traffic began to increase. The Central Executives began to arrive for the Executive meeting, which was scheduled for the next day, October, 20th. Those who could not come in on Wednesday, came in on Thursday morning.

By 4.30 pm, the newly renovated Obinkita hall was almost filled to capacity, with Central Executives, all branch Presidents and Secretaries, and a very special branch that was attending the Mass Rally for the first time- The Effium branch. They came home in their numbers, being their first home- coming. The rain that fell on that Thursday, could not stop the already poised, and excited women from attending the meeting. It was only a shower of blessing.

Friday morning opened a new chapter in the history of Mass Rally. The women come out in their numbers, dressed in sports outfits. After prayers at Amaikpe Square, they took off on an awareness rally round the entire 19 villages in Aro Kingdom. Each Ogo, was greeted with prayers, prophetic declarations and songs. It was a spiritual exercise that it’s impart will forever remain in Aro Kingdom. It was also huge fun, for women, who danced away blood pressure. Some of the Ezes who came out to bless the women were: His Royal Highness, Eze Okoroafor Uro Okoroafor, Eze Eze Agwu, Elder (Mazi Isaac Onoh, Eze Amukwa, and others.

After the early morning rally which was also closed with prayers at Amaikpe square, the women, now dressed in Omu Aro, assembled at Obinkita Hall for the General Assembly. The roll call of branches was intimidating. All branches were fully represented; as the Obinkita Hall was filled to capacity. The activities ranged from health talk, dances, drama, nkui, and songs. Effium branch came with a special Mgbede dance. The thanksgiving recorded hips of food items and wrappers, which was given to the less privileged on Saturday.

On Saturday, the grand finale came with a bang. The chairman for the day was Mazi Nwosu Kingsley Nwaka. The Eze Ogos were fully present to grace the occasion, government representatives from the state and local government levels, were also present. Honorable Uko Nkole graced the occasion with his entourage. The Nzuko Aro Men’s Wing was fully represented. Many Umu Aro who are sincerely dedicated to Aro cause, came home en mass to support the women.

Aside the usual awards that characterize ceremonies, the less privileged in the society were not left out. Bags of rice and wrappers were distributed to them.

Highlight of the occasion was the captivating and colourfull march pasts by all branches. It was indeed, a sight to behold. Oso Mmiri, and fashion parade, show cased the beauties and brains in Inyom Arochukwu.

The 2017, Nzuko Arochukwu Women’s Wing (Worldwide), was wrapped up on Sunday, the 21st with a thanksgiving service, at the Cathedral of All Saints, Ugwuavo, Arochukwu.

Inyom Aro returns all glory to God Almighty, who alone made the success possible

Aro news: Happy New Year PSG. Good to see you again! PSG:  My pleasure to talk with you guys again. Let me also wish you ...