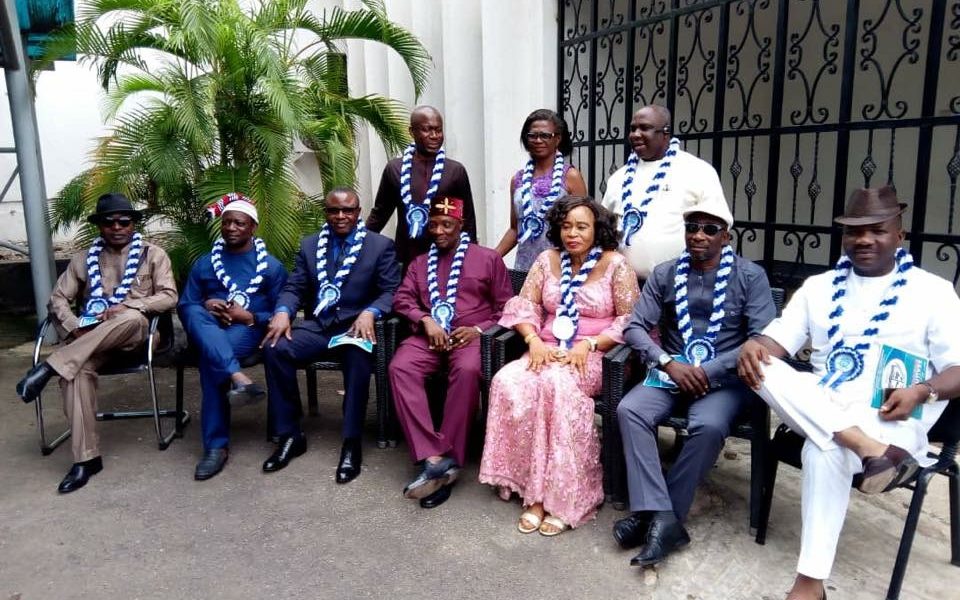 It was an epochal re-union recently in Abuja, as the new executive of Aggrey Memorial College Arochukwu Alumni Association was inaugurated amid fanfare.

For those who had not met in several years, the ceremony was a perfect forum to relive old times, and catch up on sundry things.

President of the Association, Mazi Emmanuel Okoro Egbugwu, promised that the association under his watch would rescue their alma mater from infrastructural decay and falling educational standard.

He said the executive members would “liaise with the relevant authorities to restore the infrastructural development of Aggrey Memorial College, particularly in rebuilding the Abna Hall, Independence Park, and the ICT Centre.”

Speaking at the formal inauguration ceremony of the Alumni Association, Egbukwu recalled the glorious days of the college with nostalgia, when it ranked with such other notable schools like Hope Waddell, Calabar; Dennis Memorial Grammar School, Onitsha; Kings College Lagos and others.

But he lamented that the college, which had once produced 12 commissioners out of the 15 in the then East Central State, which also has its alumni in the United States of America, United Kingdom, Europe and also occupied important positions in Nigeria, had witnessed untold neglect.
The president informed the association that “the glory of this great institution has diminished. Like one writer put it, it is a relic of decaying beatitudes.”

He, however, assured his fellow alumni members that under his watch, the association would restore Aggrey Memorial College, Arochukwu to its rightful position in the league of outstanding institutions.

He noted that his administration would identify, co-ordinate and register members of the alumni globally.

Egbugwu, who doubles as the Global President, Association of Nigeria/American Professionals in Nigeria and the Chief Executive Officer, Geiconn Nigeria Limited, an oil and gas engineering firm, graduated from the college in 1973.

Meanwhile, the Chairman, BoT, Mazi Dave Imoko, urged the new executive members to work as a team by mobilizing all old students of the institution to accomplish their mandate. Imoko, himself a 1972 graduate of the college, catalogued some of the woes of the institution, saying: “A visit to the school recently revealed that all the infrastructure are in shamble; security is a big challenge; electricity power supply had been cut off, to mention a few.”

Continuing, he said: “We charge you to bring your wealth of experience in the management of human and material resources to bear on the assignment.”

While felicitating with the new exco, Senior Prefect of the Class of 1963, Rev. Joshua Eni Kanu Oji, wrote:

“On behalf of the Senior Advisory Council (SAC) of Aggrey Memorial College Arochukwu Alumni Association Worldwide, I wish to congratulate the President and the Exco for the successful inauguration. Today, you have made history by changing the cause of history. We are proud of all of you.

Aggrey Memorial College Arochukwu was established in 1932 by Dr. Alvan Ikoku. The College was the first indigenous post-primary school in Nigeria established by an individual. In its glorious days, the institution admitted students from as far away as Ghana, Sierra Leone and Cameroon.

Some of the notable old students of the college included Dr Kingsley Ozumba Mbadiwe, Mazi S.G Ikoku, sports prodigy John Onyeador and a host of others who have excelled nationally and internationally in their chosen careers.

Similarly, plans have been concluded by the alumni to publish the biography of the founder of the college and foremost educationist, Dr. Alvan Azinna Ikoku, OFR. The committee is chaired by a professor of history and erudite scholar, Mazi Okoro Ijoma.

Israel has always been a shining example of how diaspora funding can been effectively and judiciously harnessed as solutions to local challenges and problems. Prior ...