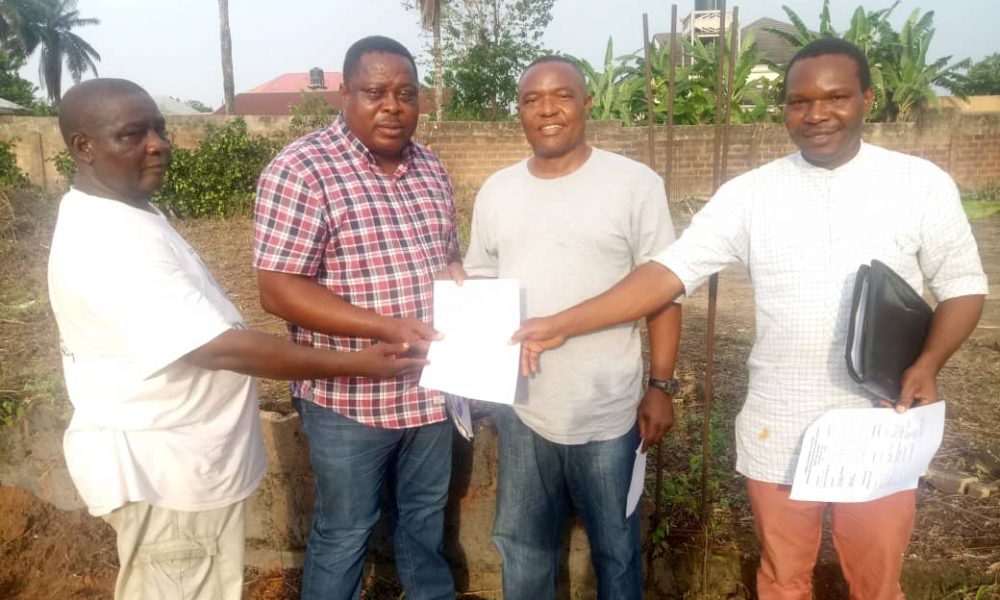 All is now set for the commencement of the construction of the Aro-Okeigbo Social Club of Nigeria (AROSON) House, six months after the fundraising event in Aro for that purpose.

The machinery for the commencement of the actual construction work was set in motion on April 10, 2019, when a team of the contracting firm arrived at the site in Arochukwu, where they were received by a delegation of AROSON Club.

Prior to that date, AROSON President, Mazi Okorafor N. Okorafor, had caused the land to be cleared and prepared for inspection by the contractor.

However, in his absence, Aro News learnt that Mazi Okorafor delegated the Club’s immediate past president, Elder IK Onu and an ex-officio member, Mazi Luke Kanu, to lead the contractor to site, and sign the contractual documents on behalf of the Club.

That process, it was further learnt, was completed at the site with fanfare, signaling the commencement of the project.

Aro News also learnt that the contractor will soon mobilise materials and staff to site, to begin work.

The AROSON Club House project has been on the drawing board for a long time, while successive executives of the Club made efforts to develop it.

But on September 22 last year, the present exco of the Club led by Mazi Okorafor (Naira) seized the bull by the horn to organise a fundraiser for the project. The event yielded substantial goodwill from invitees, which has culminated in the new impetus to actualise the project.

The president is hopeful that this time around, with the co-operation of members of the Club and support from its friends, the Club House will be completed and put to use.

“I am confident that we shall push this project through. I can only appeal to our members and friends of the Club to support us with their prayers and resources. Those that promised us something during the fundraiser should be kind enough to fulfill it. That’s the only way to succeed together,” he said.

Apparently to key into the agric policy of the Abia State government, a member of the House of Representatives Committee on Water Resources, who is ...