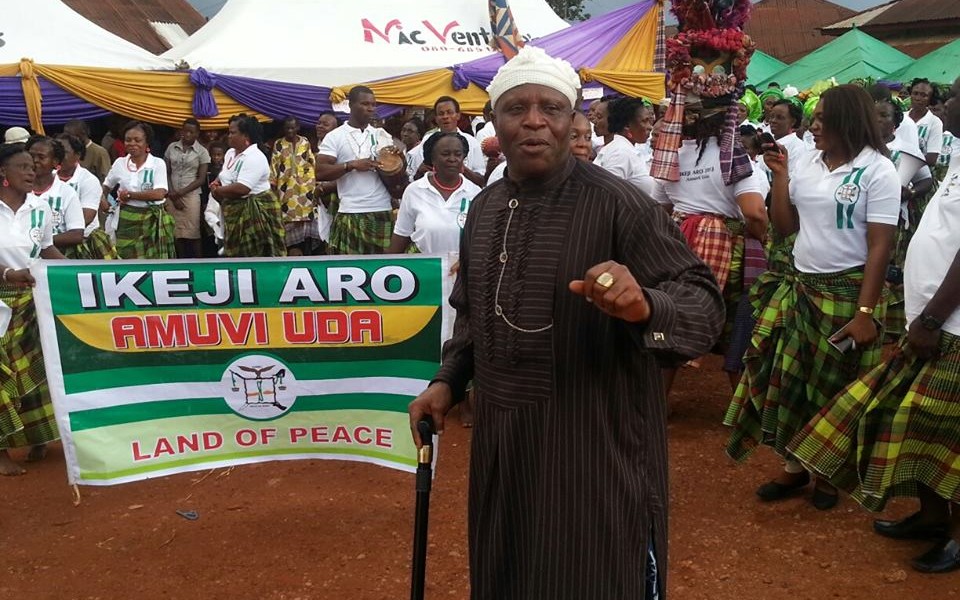 The history of Amuvi people is based on oral tradition. There is no authenticated, written history about Amuvi people, but we faithfully regard the oral history as the best alternative to other sources of history. According to oral traditions Amuvi was founded by two brothers who came from Umuoti Oke, Arochukwu. History has it that the two brothers came to the land area now called Amuvi during a hunting expedition. The parcel of land now called Amuvi was not occupied by anybody. It was a virgin forest. Their first point of entry from Asaga is called Ani Ezi Amuvi. They were captivated by the vast land with its luxurious growth and scenery. The river called Iyi-ivara attracted them most. They were so excited that they started having double mind on what next to do with their new discovery. In fact, what immediately came into their minds was to pack out from their original abode, the Amagba home, for their new heaven. They agreed that they should come and settle there. This historic decision was unanimous.

But the human mind being what it is, little did one of them realize that the brother was not sincere. So as they were happy and over excited over their new found land, one of the two gentlemen failed his own part of the agreement which they initially reached. According to their initial agreement, they mutually agreed that they would come back at an appointed date, to establish a common house for themselves. But before the appointed date, one of the two brothers came back at night without the knowledge of his brother and built a makeshift house or shed. It was this makeshift home that made all the historical changes in the future administration of Amuvi people till today.

So, on the appointed day, the two brothers came to their new found land, but surprisingly there was a shed standing. The one that had built the shed was courageous enough to admit his historical treachery and insincerity. This other brother was not happy about the way his brother out witted him. This treacherous act placed him on the position to be the one who first settled on their new found land. According to oral tradition, the one that was outwitted did not take it kindly. He took the matter to Arochukwu people: Efforts and energies, talent and money were wasted, but the one who cleverly built the first shelter there won the case after eight years of litigation.

As there was no available record to show who was senior by birth, the treacherous act decided the case. Therefore, the person who built the first shed became the senior brother and the one outwitted became the junior brother. The senior brother here represents Ugwogo and the junior brother represents Eziukwu. In fact the two brothers showed Amuvi spirit of being the brother’s keeper. It should be noted here that there was no evidence of violent settlement of the brother’s disputes. Their differences were amicably settled by the people of Arochukwu community. Therefore, based on this story, the Amuvi village community is made up of two broad lineages:

A. Ugwuogo representing the senior brother who till this day holds that position, and

B. Eziukwu representing the junior brother.

As time went on the two different families started expanding. They established families, and families established others. With the increase in their population, there were also an increases in human problems: sharing of land, human differences, interests, philosophies, talents and other problems of administration. Therefore, there were obvious needs for breaking the large families into manageable units. For the purpose of convenience and other unidentifiable reason, the Ugwuogo kindred was divided into three sub-families namely Ndi Okoromgbo, Ndi Umahi, and Ndi Obia. The same problem was identifiable in the brother’s kindred, Eziukwu. It has Ota Ezuma Oke family B the family has three blood brothers, namely: Okoronkwo Ota, Okereke Ota, and Ezuma Ota; Okoronkwo and Okereke Ota were of the same mother while Mazi Ezuma Ota was of a different mother.

When the changes in the establishment of various compounds were going on in Amuvi, the Ota family was not interested in splitting their unit, for unknown reasons. So out of the Ota family of Eziukwu, the families that were carved out were Ndi Chiobaeke, Ndi Igwe Oti and Ndi-Ota groups of families B as one family called Eziukwu made up of Ndi Okoronkwo Ota, Ndi Okereke Ota and Ndi Ezuma Ota. According to history, the Arochukwu Kingdom did not favor plural units because of some social reasons. As a result of this tradition, Amuvi people decided to establish the seventh compound; the Ota Eziukwu family, because of her large number, was asked to carve out the seventh compound. So from the family of Okoronkwo Ota, one young man called Esomonu was selected and presented to the rest of Amuvi for approval. The selection was approved by entire Amuvi community; so he became the founding father of Ezinta. At the time of selection, he was not a full-fledged man. What he did was to get his share from the share of Okoronkwo Ota family to which he biologically and historically belonged.

In summary, Amuvi has two broad compounds (kindred) made up of seven families:

(a) Ugwuogo (i) Eziukwu then for further administrative and other considerations, especially human and other problems, these two big wards were sub-divided thus:- (i) Ugwuogo Kindred was sub-divided as follows: (i) Ezi Ndi Okorombgo (ii) Ezi Ndi Umahi Nlenanya (iii) Ezi Ndi Obia.

(b) Eziukwu Kindred was sub-divided as follows:

From the facts presented here, even a layman can see that Amuvi people have close blood ties. It is therefore unreasonable for any person or group of persons to think of separating these natural ties. It is because of this oneness of Amuvi people that one of her illustrious sons Barrister Ndionyema Nwankwo, LLB (Hons.), B.L. has this to say about Amuvi AAmuvi Village is one of the nineteen villages of Arochukwu in the Arochukwu local government, area of Abia State. It is a village which is unique and refreshingly different from most of the other villages of Arochukwu. Amuvi is perhaps one of the best planned villages in Nigeria; in fact the whole of Africa. Thanks to that indefatigable gentleman, Sir Alex Onyeador of blessed memory, the Village is properly mapped and laid out. The layout is only comparable to that of a good town planning authority. The situation is such that every home in Amuvi has a drive way aborting into one of the network of roads.

Amuvi has seven wards otherwise known as and called Ezi Asaa. These are Ndi Okoro Mbgo, Ndi Umahi, Ndi Obia, Ndi Chobaeke, Ndi Igwe Oti, Ezikwu and Ezinta. Traditionally Amuvi has two-main-sharing arrangement. That is, it divides its common items, good or proceeds into two. That is what is traditionally called two=okes=. This is between the two groups called Ugwuogo and Ezuukwu. Ugwuogo’s share goes to Ndi Okoro Mgbo, Ndi Umahi and Ndi Obia; while that of Eziukwu goes to Eziukwu itself, Ndi Igwe Oti, Ndi Chiobaeke and Ezinta. Again, Ugwuogo is the ruling family while Eziukwu is the first family or Di Okpara. This simply explains the reason for the two=okes= and they take in turns in that order. These seven wards (Ezis) could be further fragmented into other smaller family units, but to what purpose?

The heritage of Amuvi lies in unity in diversity. Amuvi has many communities outside Arochukwu and include most outside Abia State. These diaspora communities bring in a motley of cultures and traditions. Thus affecting our habits, dialects, and choice of delicacies. In fact, this is the reason that in Arochukwu today only Amuvi is known for Nsisa or tapioca and Okpa delicacies. In fact, this diverse nature has helped to build and enrich the tradition and culture of the village.

However, Amuvi cannot be an atomistic society, and therefore, cannot fragment into pieces. Whatever name it is called, whichever Ezi or family a person may come from, is utterly immaterial. He or she is seen or recognized first and foremost as an Amuvi person, and is as such taken up on that single identity. In the very recent past people did not known or hear the name of any particular family; nor did anybody care to remember his or hers. We must therefore hold to our heritage, to our root where the identity is one and indivisible Amuvi. This is the ideal every true Amuvi person should work.

PAST PRESIDENTS OF AMUVI WELFARE UNION IN RECORDED HISTORY

Computer analyst and telecommunication expert clocked 60 on the 16th of May. A native of Atani village, Ononambazaoku attended Municipal Council and Baptist High School,  ...