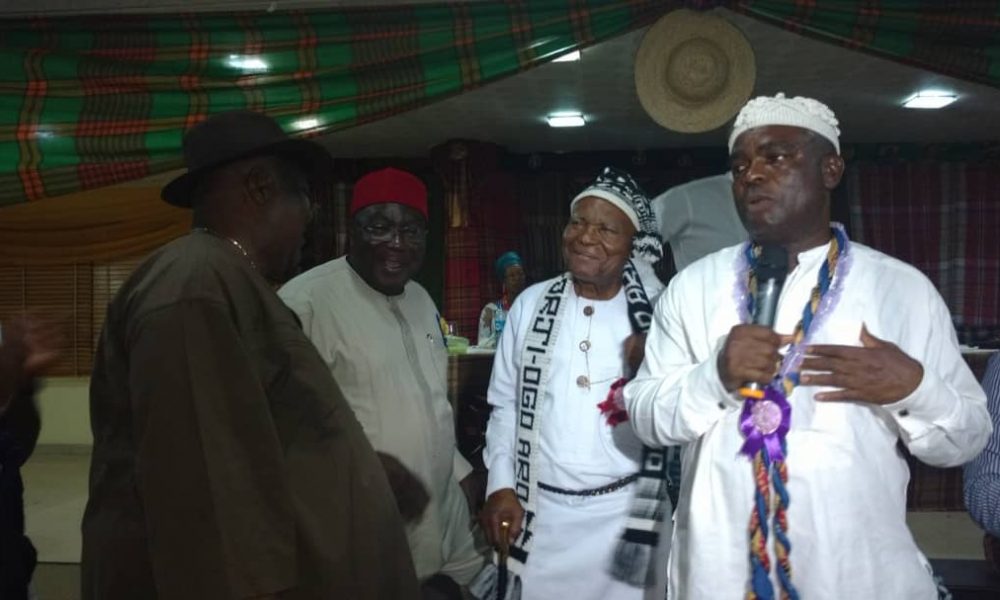 It was a bright Saturday afternoon on November 10, 2018. On that day, the Lagos branch of Nzuko Amannagwu rolled out the drum to celebrate 10 of its indigenes who had at various times invested their time and resources to uplift both the village and its people.

Anna Hall, Itua Events complex in FESTAC Town was venue of the awards presentation and unveiling of the 2019 calendar. The event lived up to its billing, having been planned over time.

Prior to commencement, a well decorated hall heralded the guests, awards recipients and their well wishers.

In his welcome address, President of Nzuko Amannagwu Lagos branch, Sir Goddy Achinivu, narrated a brief history of the union, giving kudos to members who had committed their time and resources to uphold it as one united family. The making of the 2019 Calendar, he pointed out, is a testament to the oneness of Nzuko Amannagwu.

He also mooted the idea of building an event centre in Lagos, soliciting the support of all and sundry to realize it.

In his speech, Chairman of the occasion, Mazi Okorafor Nwagugor Okorafor (Naira), captured the essence of community development and praised the leadership of Nzuko Amannagwu for the initiative. Describing it as a worthy cause, Mazi Okorafor encouraged all present to donate heartily in appreciation of the 2019 calendar, as well as the proposed events hall project which Sir Goddy Achinivu had earlier mooted.

Done with the introductory speeches, the unveiling of the 2019 Calendar took centre stage.

Sir Victor Ike Okoronkwo, who was unavoidably absent, sent in words for a handsome donation. The co-presenter, Navy Capt, Gordy Ohuabunwa and Deacon Kingsley Kanu Okereke also announced their donations, all in hundreds of thousands of naira. Thereafter, there were torrents of donations to the common cause.

As part of activities lined up for the day, no fewer than 10 persons were honoured/given awards for their contributions to worthy causes of the village.

As they took turns to receive their awards, supporters lined up behind them with cash donations in demonstration of their solidarity.

The event was rounded off with cultural display by Ekpe dance from Ujari village, and the entertainment troupe of FAYA.

Indeed the event was remarkable, given that it drew a wide spectrum of guests from within Aro Kingdom and outside, most of who threw their weight behind the worthy cause embarked upon by Nzuko Amannagwu village.