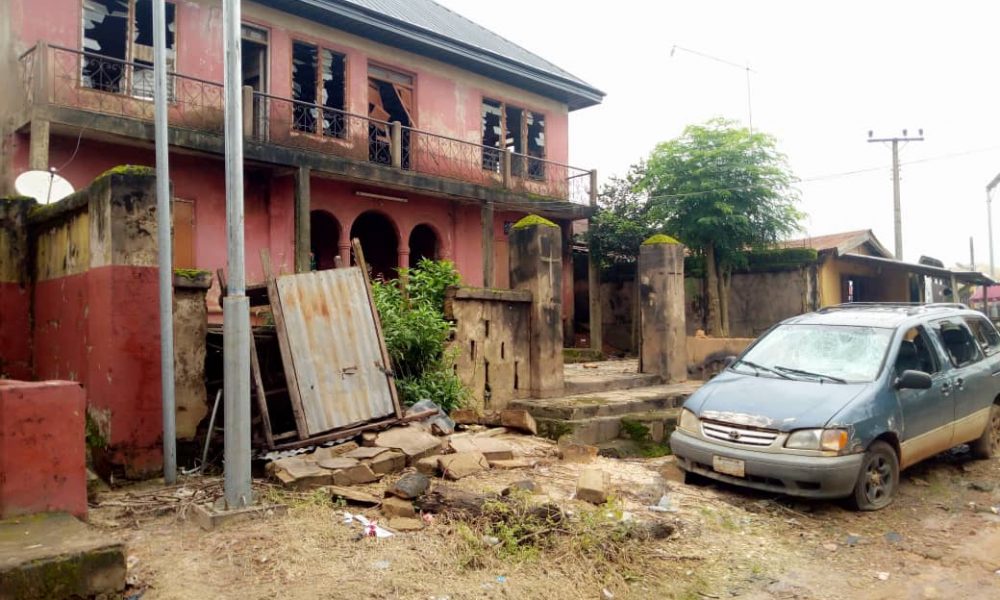 There was palpable tension in Arochukwu on July 16, 2019, as some vengeful Obinkita youths went after suspected killers of a young man called Okereke.

On the fateful day, the youths went on rampage, destroying properties belonging those they believed had a hand in the death of the young man. The affected properties included a storey building at Obinkita/Amoba junction, and a Sienna van parked in front of the house, an uncompleted building reportedly owned by one of the suspected killers.

A source told Aro News that the deceased, one Okereke aka Okwu Ego, was alleged to have stolen a bag containing a huge amount of money during a wake-keep in Aro, and fled to Aba where he squandered the cash. One Obinna (nephew of the man whose purse was stolen) reportedly got information that Okereke was in Aba and he quickly made an arrangement with a commercial bus driver (Emeka) who plies Aba-Aro route, to lure Okereke with money back to Aro.

The plan was for Emeka to make an offer to Okereke who was then a wheelbarrow pusher in Aba (after allegedly squandering his loot) by requesting him to become his (Emeka’s) conductor. The offer reportedly made, Okereke allegedly accepted, unaware that it was a bait to lure him to Aro, to face his fate.

On that fateful day, Okereke returned from Aba to Aro as Emeka’s conductor. Emeka was said to have informed Obinna that Okereke was in town. Obinna reportedly mobilised some of his friends from Amoba, Ibom, Amankwu and Ujari. They allegedly abducted Okereke from his house and tortured him till he was almost dead. At a point, the Obinkita youths chairman reportedly intervened, and made arrangement for the victim to be rushed to St. Anthony’s Hospital in Oror, for possible resuscitation. Unfortunately, he died.

But two of Obinna’s  accomplices were arrested and are currently telling the police what they know about the incident.

When Aro News learnt that the youths have vowed that justice must be served on the perpetrators of the heinous crime, insisting that bringing the culprits to book will deter others who may contemplate taking the laws into their hands.

They argue that whatever the offence Okereke might have committed did not warrant taking his life in the manner his killers did.

It wasin a vengeful reprisal that the ylouths stormed the homes of those they believed participated in the torture, which resulted in Okereke’s death.

They reportedly vented their anger by stoning and destroying the glass doors and windows of some selected houses in Obinkita, Amoba, Ibom and Ujari believed to be the homes of their targets.

It was indeed a day of rage in Arochukwu when the irate youths, wielding stones and clubs and riding in pairs and threes on Okada backs, went from village to village in search of the homes of their targets.

Apart from Mazi Kanu Oji, the former Eze Aro,  Mazi T.K Uchay, who designed the Omu Aro, there is hardly any other individual dead or ...