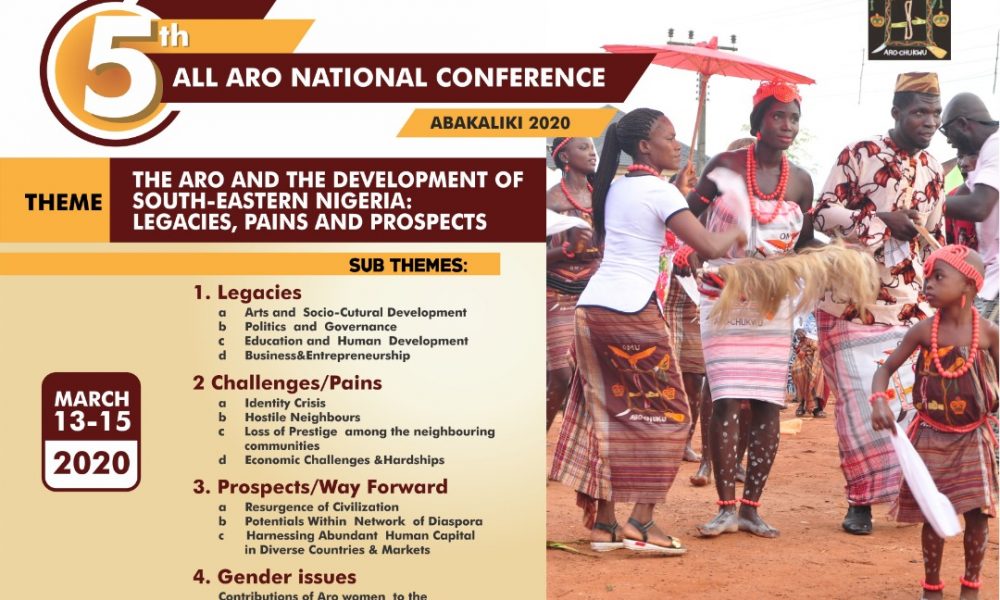 On Saturday March 14, 2020, Aros at home and in diaspora will gather at Abakaliki for an epoch making event. The 5th All Aro National Conference, (tagged Abakaliki 2020) which is scheduled to hold on that day will continue until Sunday, March 15, 2020. Being the 5th to be staged after the maiden conference which held at Arochukwu in 1996, and 2nd, 3rd and 4th that held at Aro Ndizuogu, Aro Ajalli and Aro Owerri, it promises to surpass the previous ones in both organization and attendance. The program starts on Friday with the arrival of the conference delegates and registration formalities. Later that same evening, there will be social and cultural activities to welcome and entertain guests. Registration of participants will continue on Saturday morning before the opening ceremony and recognition of delegates at about 10.00 a.m. The conference papers will be presented and discussed on Saturday and there will be a banquet the same night. On Sunday, all delegates will worship together in a combined thanksgiving service before departing the venue to their respective abodes.

The conference which shall take place at the International Conference Centre, Abakaliki has its theme as “The Aro and the Development of South-Eastern Nigeria: Legacies, Pains and Prospects” and it aims at documenting the social, political, economic and cultural contributions of Aro to the growth and development of South-Eastern Nigeria while identifying the reciprocal gains in the light of our diaspora experience. The lead paper will be presented by Professor Okoro Ijoma, Chairman, All Aro National Conference, Distinguished Professor and Scholar of Aro and Igbo history and culture. Other resource persons include: Mazi Sam Ohuabunwa, Professor Paul Ugboajah, Prof Joseph  Nwankwo, Prof. T N Kanno , Mazi Kanu Ivi,  Mazi George  Ezuma, Dr Kanu Ohuche, All Aro USA, Dr. Orji O Orji and Mazi Ohiaerinwa O Okoro. All Aro stakeholders and leaders of the various Aro communities are expected to be in attendance. It is open to all Umu Aro, scholars and students, historians, media executives, lovers of culture and all interested individuals. A token fee will be charged per delegate (non students) to cover all conference papers and proceedings. Abakaliki 2020 is expected to showcase love and hospitality, grand atmosphere to be created by the assemblage of great Aro minds from various settlements and the Aro throne shall be represented by the Eze Aro and his cabinet and the Ezes of various Aro communities, who shall add a touch of royalty to the forum.

The Chair, AANC, Professor Okoro Ijoma noted that this year’s conference objectives, which is a continuation of the primary objective of the previous editions, is targeted at sensitizing Aros and repositioning them for the challenges of the 21st century. At each of conference, the challenges confronting the Arochukwu nation are discussed, and papers to be presented shall proffer solutions and stimulate cultural, historical and economic strategies for handling such challenges. In essence, answers shall be sought to the question about how to make Aro people more relevant and functional in our society in the 21st century. For all Aro people, the understanding of their historical antecedents, intellect and uniqueness are the ultimate survival skills in the 21st Century. In addition, these features are key tools in handling very crucial issues of their age long quest for fundamental human rights, independence, democracy, cultural standards and other facts of life. It was these facts that led to the inauguration of the Organizing Committee which planned the first All Aro National Conference that took place in 1996. These same issues provided perspectives that were explored at the second conferenceat Aro Ndizuogu which is the largest homogeneous entity of the Aro in diaspora.

After the first and second conferences, the third and fourth also focused on similar objectives by discussing various aspects of Aro challenges in this millennium, proffering and stimulating cultural, historical and economic strategies for handling such challenges and establishing a permanent institution that will work towards aggregating the resources available to Aro people and make them more relevant and functional. The AANC Secretariat described the 21st Century as that of information technology and globalization. This trend which started from the 20th Century will definitely be accentuated in the current one. The pertinent question therefore, is what are the implications of all these to Aros in various abodes particularly in consolidating the gains of their forefathers. After each conference, the proceedings are usually published in a dedicated book series – Building on the Debris of a Great Past, to ensure availability of the ideas to future generations. It will be recalled that as a way of reversing the apparent drift in their cultural, historical and economic life, the 1st All Aro National Conference was organized at Ibom Hall, Arochukwu between November 22 – 24, 1996. The need for such a conference had for long been felt by persons and groups of Aro descent. However, the major impetus came from the speech delivered by Prof. Green Nwankwo of Aro Ndizuogu at the launching of WHO’S WHO in Aro Okigbo at Lagos. But events did not move rapidly then, as the Eze Aro tussle lingered. At the successful coronation of His Majesty, Mazi Vincent Ogbonnaya Okoro as Eze Aro the VIII, an Organizing Committee led by Dr. Okoro Ijoma with Sam Ohuabunwa as Secretary was appointed by Nzuko Aro in early 1996. The committee held several meetings at Aro, Owerri, Umuahia, Ajalli and Oguta before eventually staging the conference at Aro in November, 1996.

Abakaliki 2020 promises to be unique in many ways. Reports from all sub-committees and the Local Organizing Committee (LOC) indicate that the conference will be a huge success. Some prominent sons and daughters of Aro have vowed to make personal sacrifices; including donations to avoid any challenge that might adversely affect its fortune and Aros across the entire eastern Nigeria are fully mobilized. The conference venue which is the International Conference Centre, Abakaliki and the entire community are said to be already agog with preparations and expectations. The registration desk shall be manned by members of the Local Organizing Committee assisted by some students and members of Ezienyi Club who also donated some of the conference materials. The whole community is said to be in high spirit especially for having been honored as host to the entire Arochukwu indigenes, so are more than ever determined to showcase their rich civilization and endowment as well as their contributions to the making of the Nigerian state, to the whole world. Many delegates are being expected from Aros living at home, those outside the homeland in Aro settlements which are scattered all over Eastern Nigeria, as well as, those residing in cities and towns across Nigeria and overseas. The All Aro USA, an umbrella body of umuaro residing in North America have designated delegates as representatives and also written one of the papers to be discussed. Aros from all walks of life are gearing up to make Abakaliki 2020 a memorable event if only to send signals that the present generation of Aro, aware of the worthy efforts of their past heroes, are prepared and ready to do everything possible to reposition themselves for even loftier heights. The event which shall be watched live on the social media handles of www.aronewsonline.com shall, perhaps, bring Aro closer to the actualization of the dreams and aspiration of another glorious dawn in their lives and times.