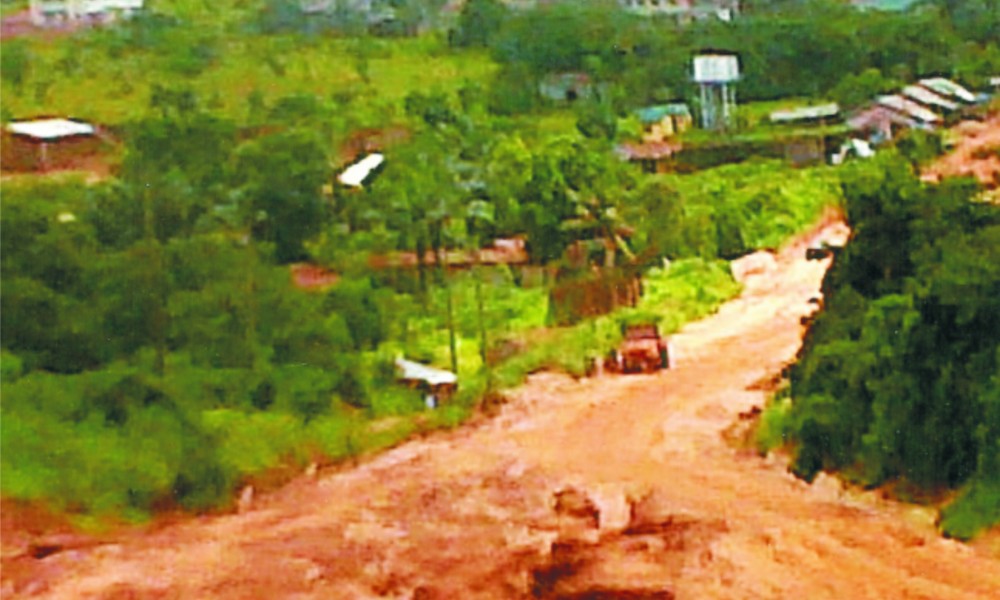 The 23-kilometer (14.3 miles) Arochukwu-Ohafia Road is a Federal road which runs from Ebem in Ohafia to Amuvi Village in Arochukwu Local Government Area of Abia State. Along this stretch of road lie two major towns of Ihechiowa and Ututu which form parts of the local government area, along with Abam and Isu communities with an estimated population of 169,000 people.

The road, first constructed during the First Republic era, was last rehabilitated during the Second Republic administration of Alhaji Shehu Shagari. Since then, subsequent repairs by successive governments have been nothing more than grading during the dry season and filling of some potholes in the rainy season. During the Sani Abacha military regine, contract was awarded for reconstruction of the road from Ohafia to Arochukwu, under the Petroleum Trust Fund [PTF] programme headed by General Muhammadu Buhari (rtd). The contractor chose to start from the Umuahia end and work towards Arochukwu; in 1999, when work had already reached parts of Ebem Ohafia, the Obasanjo administration decided to wind down PTF and reverted this and several other road projects back to the Federal Ministry of Works. That signaled the beginning of the sufferings of the communities along this road, and those who ply it on a daily basis.

The purpose of this essay is not to chronicle the story of failed political promises or abandoned road projects by contractors; rather it is to examine the health, social and economic impacts of the deplorable state of the 14.3 mile stretch of Federal road, which, under normal circumstances, should be a 30 minutes drive from Ebem Ohafia to Amuvi-Arochukwu, thus enhancing the businesses of residents of Ihechiowa, Ututu and Arochukwu communities; in fact those that use the infrastructure on a daily basis.

Health implications on the road users

The one hour journey from Arochukwu to Umuahia, where better health services are available, takes three hours. This results in major delays in accessing better healthcare facilities in Umuahia and Aba for emergency situations, leading to exacerbation of existing health situation and, eventually death.

There is increased frequency of accidents resulting in multiple deaths and dismemberments. Aside the accidents, plying the road in the worst of seasons, especially with public transportation, may have resulted in many pregnancy miscarriages. Lack of evidence to this claim may be attributed to two reasons: one, there are no existing records; because, two, commuters have not made a correlation between the loss of a pregnancy soon after plying the road and the condition of the road itself.

The dusty nature of the road in the dry season, especially immediately after grading, either results in onset of many respiratory illnesses in the most vulnerable – especially children and elderly, or compounds existing situations in many who are already suffering various kinds of respiratory ailments.

Also, for the weak and elderly, plying the Arochukwu – Ohafia Road could (and do) result in muscular-skeletal displacements, including hip, knee and ankle strains and dislocation. All of these strain not only the skeletal health services available to the rural communities, but their personal budgets too, since only a few of them could afford to pay for private healthcare.

Effects on the local economy

Compounding the health problems inherent in plying this Federal road is the dire economic impact on both public and private transport owners. For commercial vehicle operators, the frequent breakdown of their vehicles means frequent stops at mechanic workshops for one form of repairs or the other. The repair costs are then transferred to the commuters in the form of high transportation fares. Private vehicle owners equally face the same situation, though at much less frequency than the commercial operators. All the same, they face the options of either subjecting their vehicles to the rigors of the road, or utilize the services of commercial transporters. Either way, there are costs incurred. Apart from the transportation cost, there are costs in terms of time wasted, inconvenience and personal health risks, all of which if monetized, adds up to a substantial sum. Using one’s personal vehicle equally subjects one to the same costs, inconvenience, and risks associated with the terrible state of the road.

Most commercial vehicle operators choose not to ply the road entirely, thereby subjecting prospective passengers to hours of uncertainty. A decline in transportation services directly impacts commercial activities within and around the affected communities. Local roadside businesses that depend on sales to motorists and passengers for their daily sustenance experience a decrease in transaction due to slowdown in the volume of commercial travels. The same decline in volume results in high cost of transportation of people and commercial consumer goods from the cities like Umuahia, Uzuakoli and Ohafia to the bordering communities of Ihechiowa, Ututu and Arochukwu. The extra costs are passed on – just like the repair costs – to the local consumers, some of whom cannot afford to pa for the goods. The situation results in some of the businesses either closing shop or relocating to a greener pastures in the cities.

Apart from the negative impact on economic activities, there is the damage to existing infrastructures, both public and private. Most of the residential houses, commercial buildings, and public facilities like schools, clinics and government facilities are either covered in red dust for many months in the year or exposed to other severe elements of nature, thus speeding up deterioration of the structures and fall in property values.
Where an effective and efficient tax collection system exists, reduced commercial activities in the affected communities results in lower tax revenue for the government, and a dearth of funds to provide needed social services to the communities.

There are a few major ways the state of the Ohafia-Arochukwu road could impact the host communities socially. The dearth in private commercial activities results in increased unemployment, thus exacerbating criminal activities by the unemployed youths. The absence of government institutions, and/or job-creating programmes, which could absorb the unemployed from the private sector, influences the decision to resort to crime for daily sustenance. It is on record that, in the past few years, the three major communities of Arochukwu, Ututu and Ihechiowa have witnessed an increase in unemployment among its employable age bracket. Within the same time period, there is a corresponding increase in sundry criminal activities – including murder, in some cases.

The current state of the road has also caused a drastic reduction in social interactions amongst the neighboring communities. This affects not only friendly social interactions; it also impacts the frequency of cultural exchanges, governmental agency interactions, and inter-school athletic programmes. The condition of the road has, over the years, contributed to a reduction in the number of traders and customers from Ututu who patronize the new market in Arochukwu, and the dry fish market at the Akwa Ibom communities bordering Arochukwu. Ditto, patrons of major markets in Ututu and Ihechiowa communities. With the reduction in the number of those engaged in commercial activities come a reduction in trade volume, which affects revenue generation at both individual and government levels.

Another thing that suffers is the preventive rural healthcare programme provided by the various levels of government to the local communities; programmes like child immunization and well-woman services provided free by the government are either routinely postponed or shelved completely, because city government healthcare staff refuse to subject themselves to the rigors of plying the deplorable road. Rural water and power supply projects, community clinics, police stations and the local magistrate offices also suffer the same fate as the preventive healthcare programmes because government technicians refuse to travel to any of these communities to effect necessary repairs on government infrastructure. All these contribute to an atmosphere of general neglect and abandonment, leading to increased cases of infectious diseases.

How can the three major communities of Ihechiowa, Ututu and Arochukwu benefit from a repair/reconstruction of this road? First, the local economies will benefit from the influx of what one might term “weekenders”. These are indigenes of the communities who reside in faraway cities as Aba, Umuahia, Port Harcourt, Enugu, Owerri etc, who prefer the peace and quietude of the rural communities at weekends. The revenues local businesses generate from these weekenders could be reinvested in business expansion resulting in job creation, and improvement of social services to better cater for the elderly community. Not only this, for communities like Arochukwu with tourist sites like the Long Juju, slave trade routes, and the slave artifacts museum, among others, continued influx of non-indigenes to the community could spur development of these tourism sites to attract more visitors and international attention. Another benefit is the improvement of intra-village roads in these communities. Constant vehicular use of the pathways will result in their widening and recession/ elimination of brushes, thereby making it safer for pedestrian use.

As one can see, there are several direct and accessory benefits accruing from the repair/reconstruction of the 23-kilometer Arochukwu-Ohafia road; decreased travel time between the two towns, less repair and transportation costs for commercial transporters, reduced health problems for all who ply the road, quick access to better health facilities in Umuahia and Aba, improved local business environment leading to increased job opportunities, reduction in petty crimes occasioned by unemployment, more tax revenues into the local government coffers for provision of social services, quicker evacuation of consumer farm produce from farms to markets in the city, reduced food costs, and reduced mortality rate. If governments at every level were to factor in all of the above in their decision making as to which infrastructural services to provide to the people, they would make the reconstruction of the Arochukwu-Ohafia road a priority.

On Tuesday, 19 August 2017, a new set of leaders of the home branch of Amuvi Welfare Union, Arochukwu, was elected during the union’s meeting ...